NASA Administrator Jim Bridenstine said he was ‘confident’ Russia’s manned Soyuz would return to flight safely by the end of this year.

On October 11 a manned Soyuz rocket malfunctioned 50 miles above the ground on the way to the International Space Station.

Russian Aleksey Ovchinin and American Nick Hague survived the ordeal after the booster on their Soyuz rocket malfunctioned and the rocket automatically turned back during a dramatic 7G ‘ballistic re-entry’ in what was the first in-flight launch abort of a crewed Soyuz mission since 1975.

WHAT’S NEXT FOR SOYUZ?

Three launches of the Soyuz rocket are planned before the vehicle is used to launch a crewed spacecraft.

Earlier this week Russia has sent a Soyuz rocket into space for the first time since an aborted launch earlier this month endangered the lives of two astronauts.

Two other launches, one of a Progress cargo spacecraft for the International Space Station and the other carrying the MetOp-C European weather satellite, are scheduled for November.

‘I am very confident with where we are, that we will launch again in December and that there will be no gap in human activity on the International Space Station,’ he said after a luncheon speech at the American Astronautical Society’s Wernher von Braun Memorial Symposium according to SpaceNews.

Bridenstine praised the Russian state space corporation Roscosmos for their openness in the investigation of the accident that triggered the abort of the Soyuz MS-10 spacecraft two weeks earlier.

‘Roscosmos has been very transparent with NASA on the failed launch of the Soyuz,’ he said.

‘We have really good data and, in fact, we’ve got really good imagery that we have seen.’

That investigation, Roscosmos said in an Oct. 20 statement, should conclude with a final report Oct. 30.

The focus has been on a problem during the separation of the side boosters that damaged the core stage, possible due to poor workmanship.

Three launches of the Soyuz rocket are planned before the vehicle is used to launch a crewed spacecraft. 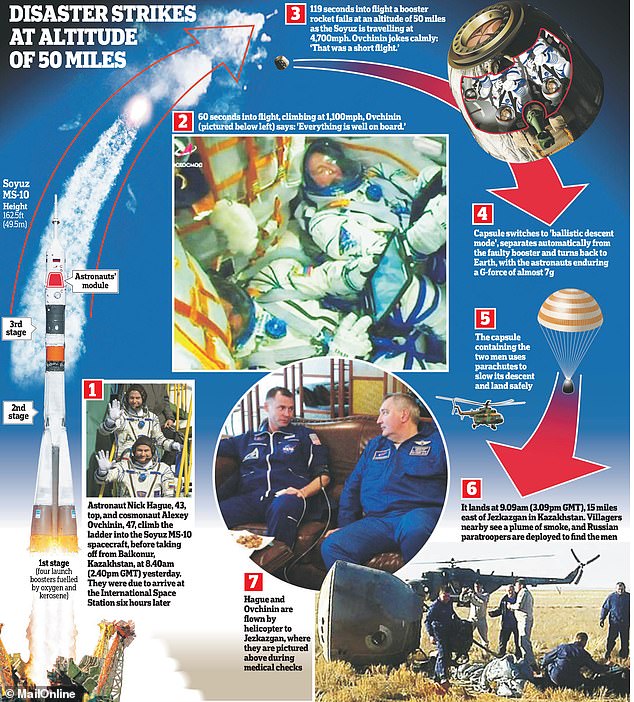 Earlier this week Russia has sent a Soyuz rocket into space for the first time since an aborted launch earlier this month endangered the lives of two astronauts.

The latest mission was successful and featured a Lotos reconnaissance satellite, the fourth in the Russian military’s Liana signals intelligence (SIGINT) programme.

These spacecrafts are used for intelligence purposes and intercepts and collects radio signals for Russian analysis.

It will now reside in low Earth orbit, ranging between approximately 150 miles (240 kilometres) and 560 miles (900 kilometres) from Earth.

Two other launches, one of a Progress cargo spacecraft for the International Space Station and the other carrying the MetOp-C European weather satellite, are scheduled for November. 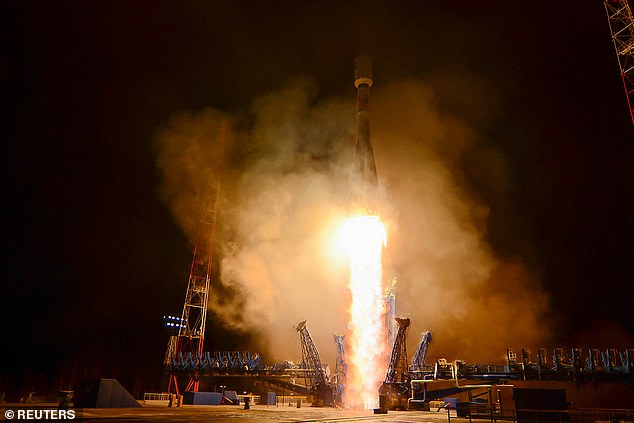 The Soyuz launch failure took place less than a month and a half after the ISS crew discovered a small hole in the orbital module of the Soyuz MS-09 spacecraft currently docked there.

The cause of that hole remains under investigation – and has been the source on tension between Russia and America.

At the luncheon, Bridenstine was asked if both the launch failure and the damaged Soyuz spacecraft had caused concerns about the Russian space program.

‘Yes, there are concerns. We have concerns. Russia has concerns,’ he said.

This resulted in thrust termination – the rocket’s engines being shut down as a safety measure – and triggered the spacecraft’s automated abort mechanism.

A tiny hole appeared in a Russian space capsule locked to the ISS on 29 August.

Space agency chief Dmitry Rogozin said on September 4 the hole was caused by a drill and could have been made with a ‘wavering hand’. 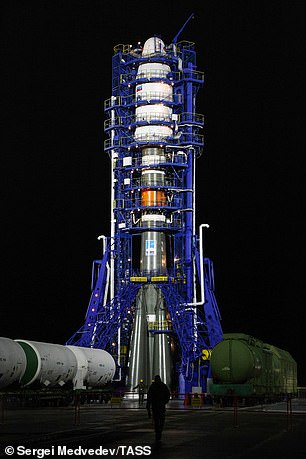 A conclusion has yet to be formally released stating the cause of the problem.

Video footage from the launch at the Baikonur Cosmodrome emerged showing a large plume of smoke coming from the rocket at the moment it failed.

Alarming video from inside the capsule itself shows the two astronauts being violently shaken about as they return unexpectedly to the surface.

Search and rescue teams were scrambled to the touchdown location as NASA revealed the descent meant the Russian-built Soyuz MS-10 spacecraft had to take ‘a sharper angle of landing compared to normal’.

NASA rookie Nick Hague and second-time flyer Aleksey Ovchinin of the Russian space agency were setting off for a six-month mission at the International Space Station Thursday, on a relatively rare two-man launch.

The Soyuz rocket was due to dock at the orbiting outpost of the International Space Station six hours later, but the booster suffered a failure minutes after the launch.

NASA and Russian Roscosmos space agency said the astronauts were in good condition after their capsule landed about 20 kilometers (12 miles) east of the city of Dzhezkazgan in Kazakhstan.

The International Space Station – a rare point of cooperation between Moscow and Washington – has been orbiting the Earth at roughly 28,000 kilometres per hour since 1998 and will mark its 20th birthday in November.

Over the past few years the Russian space industry has suffered a series of problems including the loss of a number of satellites and other spacecraft.

Russia has continued to rely on Soviet-designed booster rockets for launching commercial satellites, as well as crews and cargo to the International Space Station.

The Soyuz rocket: Decades of blasting into space

The Soyuz programme is an ongoing human spaceflight programme which was initiated by the Soviet Union in the early 1960s, originally part of a Moon landing project.

There have been 138 manned missions, of which 11 have failed and one astronaut has died.

Here are some of the notable failures, including one in 1967 when an astronaut was killed, one in 1975 when two astronauts hurtle to Earth.

1967: Soviet astronaut Vladimir Komarov was killed during landing due to a parachute failure

1975: Two Russian astronauts had to abort a mission to a Russian space station at an altitude of 90miles due to a rocket failure.

They hurtled towards Earth and safely landed in the Altai Mountains on the Russia-China border.

One of the astronauts never flew to space again, never fully recovered from the accident and died aged 62 in 1990. The other made two more flights.

1983: A rocket malfunctioned during the countdown to take off in southern Kazakhstan.

Automatic systems ejected the two Russian crew-members just seconds before the rocket exploded. The fire burned on the launch pad for 20 hours.

2002: A Soyuz ship carrying a satellite crashed during launch in Russia when a booster suffered an engine malfunction. The ship landed near the launch pad, killing one engineer on the ground.

2011: A Soyuz-U mission carrying cargo failed to launch to the International Space Station when the upper stage experienced a problem and broke up over Siberia.

2016: Another cargo ship was lost shortly after launch, likely due to a problem with the third stage of the Soyuz-U.

August 2018: A hole in a Soyuz capsule docked to the International Space Station caused a brief loss of air pressure and had to be patched.

The Russians claimed the hole was drilled deliberately in an act of sabotage either on Earth or in orbit. Another theory is that the hole was a production defect.