NASA has been forced to defend an article it wrote four-years-ago that appeared to suggest there was a 13th Zodiac sign after the story resurfaced on Twitter.

Social media users took to the site to call out NASA for the research, which also saw dates of existing signs change with one claiming ‘I am not a Virgo’.

In the article, which was published in 2016, NASA recalculates Zodiac signs – drawn up by the ancient Babylonians – using modern astronomy techniques.

NASA said: ‘We see your comments about a zodiac story that re-emerges every few years. No, we did not change the zodiac.’

Daily Mail astrologer, Oscar Cainer, said people were likely taking an interest in the article due to the presence of Neowise drawing people’s attention to the skies.

NASA said: ‘We see your comments about a zodiac story that re-emerges every few years. No, we did not change the zodiac’

In the 2016 NASA Tumblr post, astronomers for the space agency said they weren’t changing the Zodiac, just doing the maths on the real positions of stars.

The original positions of the Zodiac signs were drawn up by ancient Babylonians 3,000 years ago, but space isn’t constant and star positions drift over time – changing exactly where in the sky above us the constellations appear.

So NASA write about this shift on its Space Place website, designed as a way to teach children about astronomy.

That article seemed designed to annoy those that follow their horoscope, with the opening line ‘First Things First: Astrology is not Astronomy!’ 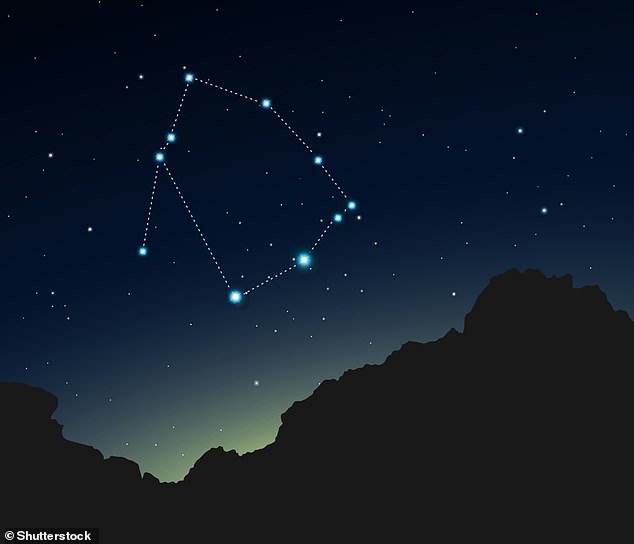 In the 2016 NASA Tumblr post, astronomers for the space agency said they weren’t changing the Zodiac, just doing the maths on the real positions of stars. This is the constellation of Ophiuchus – left out of the Western Zodiac by the Babylonians 3,000 years ago

‘Astronomy is the scientific study of everything in outer space. Astrology is something else. It’s not science,’ the space agency wrote.

‘No one has shown that astrology can be used to predict the future or describe what people are like based only on their birth date,’ the article continued.

‘Still, like reading fantasy stories, many people enjoy reading their “astrological forecast” or “horoscope” in the newspaper every day.’

This alone was enough to spark controversy among astrology fans, but the article then went on to explain that stars have shifted over the 3,000 years since the Babylonians drew up the constellations and gave them names.

‘When the Babylonians invented the constellations 3,000 years ago, they chose to leave out a 13th sign,’ NASA explained on Twitter.

For their calculations the agency added Ophiuchus back into the mix and worked out exactly where the stars are today to create new dates for the zodiac signs.

This article resurfaces every few years on social media and this time it is the turn of Twitter – with users complaining it has ‘messed up their lives’.

Devon wasn’t having any of it, tweeting ‘not having this nasa thinking they can change everyone’s zodiac signs I’m not a Capricorn.’

However, some users remember the previous times the story has surfaced online.

Cece said: ‘Every single year this fake ass new zodiac sign comes around and yall fall for it every time.’

‘NASA can’t add another sign bc that’s literally not how it works??? it’s based around the SEASONS which ancient ppl used to use for farming that’s why Aries is at the beginning of spring’. 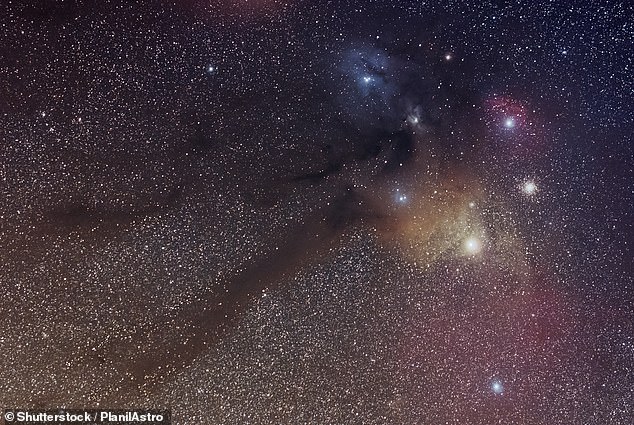 Nebula in Ophiuchus, the constellation behind the Ophiuchus sign users on Twitter are complaining about. This constellation is about 500 light years from Earth

Some users were hearing about the new sign and changes in Zodiac dates for the first time – and it left them very upset.

Writing in all caps – shorthand for shouting online – Waldo was not happy with NASA.

‘DUDE I LITERALLY CANNOT BELIEVE THAT NASA IS […] UP ZODIAC SIGNS. THEY ARE SUCH A VITAL AND IMPORTANT PART OF MY LIFE. HOW COULD THEY RUIN SOMETHING SO IMPORTANT. I CANNOT HANDLE THE THOUGHT OF BEING A VIRGO.’

ZODIAC SIGNS ACCORDING TO NASA: WHAT AM I?

Sava wasn’t enjoying the change either, saying: ‘NASA wants to convince me that they can change the dates of the zodiac signs that has been recorded by the babylonians before a few hundred years. I can’t digest it.’

Daiily Mail Astrologer, Oscar Cainer, explained that this was nothing new, that it was not a miraculous revelation from NASA on the nature of astrology.

‘Cosmologists at Nasa first ‘discovered’ a 13th constellation, — Ophiuchus, aka the snake-bearer — several years ago, claiming it as a new Zodiac sign for people born between November 29 and December 17,’ he said.

‘Astrology aficionados were debating its significance even before that. So why has Ophiuchus resurfaced now?’ Cainer queried.

He said it was likely to do with comet Neowise being visible with the naked eye and drawing people’s attention back to space.

‘Its sudden dramatic appearance has encouraged more of us to look towards the heavens to seek insight into these strange times. And who should be looking back but the long-forgotten Ophiuchus?,’ he wrote.

The Babylonians were aware of Ophiuchus about 3,000 years ago, along with the 12 constellations studied by astrologers today.

Cainer said they split the Zodiac into 12 equal parts, each a 30-degree slice of the 360 degree path of the Sun in the night sky and gave each slice a sign.

These signs were designed to match the Babylonians’ own 12-month calendar, based on the Moon’s phases.

‘So the 13th, Ophiuchus, got conveniently left out. And now it’s back,’ Cainer said.

Ophiuchus, also known as the snake-bearer, is sometimes seen as the 13th sign in Western Astrology.

Based on the current position of the stars it would represent people born  November 29 and December 17. 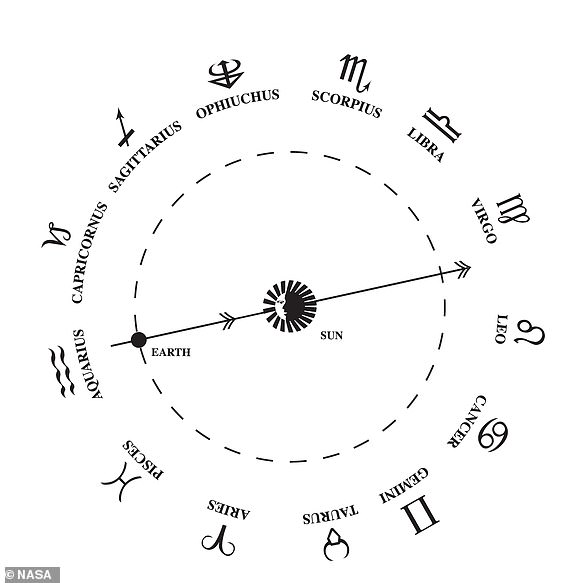 NASA updated the Zodiac to put Ophiuchus back into the signs

It was the Babylonians who originally spotted Ophiuchus about 3,000 years ago but it didn’t fit into their ‘power of 12’ division of the night sky.

So they left it out and we get the 12 signs commonly used in astrology.

According to Daily Mail astrologer Oscar Cainer people born within the Ophiuchus dates tend to be flamboyant and outgoing, while ready to commit deeply to the right person once they find them.

They are generous folk who strive hard for success.

In astronomy it is a large constellation along the celestial equator and is represented by a man holding a snake.

Ophiuchus lies between Aquila, Serpens, Scorpius, Sagittarius, and Hercules, northwest of the centre of the Milky Way.