The NASA engineer who created a viral prank to catch thieves stealing packages has admitted that some of the reactions in the video were fake.

Mark Rober took to Twitter to explain that some of the thieves in his video, which has reaches over 44million views, were in on the prank without his knowledge.

Rober booby trapped a package with glitter and stink bombs along with cameras so thieves stealing the parcel from his doorstep would get a surprise, and he’d be able to capture their reactions.

‘I was presented with information that caused me to doubt the veracity of 2 of the 5 reactions in the video,’ Rober wrote on Twitter after the video went viral. ‘These were reactions that were captured during a two week period while the device was at house 2 hours away from where I live.’

He said he had offered to compensate anyone willing to put out the package on their doorstep if the package got stolen from their porch and recovered with usable video. A friend of a friend offered.

‘It appears (and I’ve since confirmed) in these two cases, the ”thieves” were actually acquaintances of the person helping me,’ he wrote. Rober has since cut them from the video.

Mark Rober’s video went viral and now has 44million views, however he admitted that some of the thieves reactions were faked 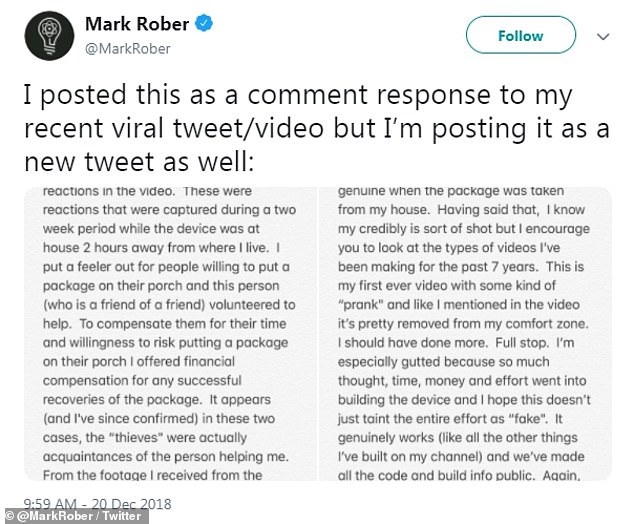 Rober took to Twitter to apologize and explain the situation. He was commended for his honesty

‘I can vouch that the reactions were genuine when the package was taken from my house,’ he continued. ‘Having said that, I know my credibility is sort of shot but I encourage you to look at the types of videos I’ve been making for the past 7 years.’

Rober said he was inspired to create the booby trap after a woman was caught on his home security camera walking up to his door and stealing a package off of his porch. When he brought the surveillance video to the police, they said it wasn’t worth their time to investigate it, so he decided to take matters into his own hands.

What he came up with was a package that, from all appearances, looked like an Apple HomePod with an Amazon sticker on it.

However inside is actually a high-tech box with a cup filled with glitter, a trigger to release it, a fart spray that whirls up and emits a stench every 30-seconds upon opening, and four hidden cell phones capturing the would be thieves’ reaction from every possible angle, regardless from where the box is opened.

Rober had the perfect skills and network of fellow engineers to devise what he calls the ‘over engineered revenge bait package.’

He said this was his first ever prank video.

‘I’m really sorry about this,’ he added. ‘I am responsible for the content that goes on my channel and I should have done more here. I can vouch that the reactions were genuine when the package was taken from my house. Having said that, I know my credibility is sort of shot.’ 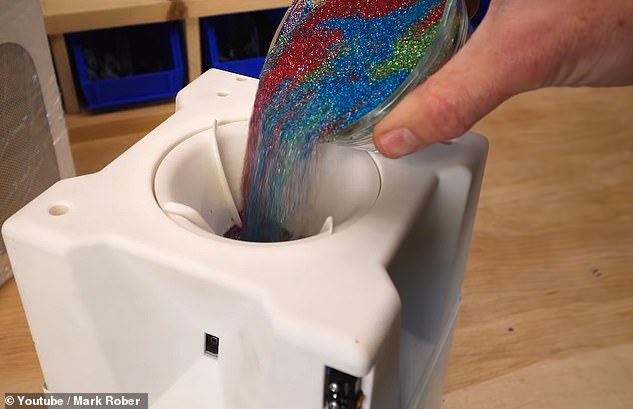 Rober had previously been the victim of a package thief so he came up with an ingenious device to glitter, stink up and snag would be thieves 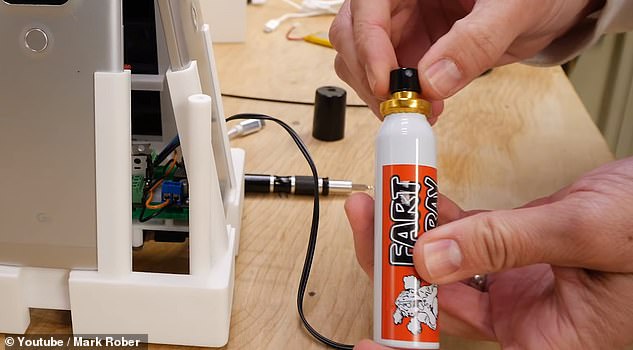 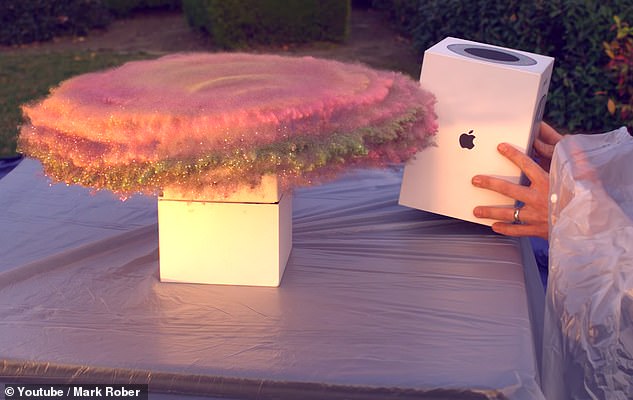 The glitter bomb in action: The glitter is of the ‘extra fine’ variety making clean-up a real nightmare for whoever steals the box

Rober’s genuine apology was met with praise for his honestly and transparency.

Some called him a ‘class act’ while others commended him for his work and further for his handling of the situation.

The box itself was complete with a return address for Kevin McCallister, the Home Alone boy played by Macaulay Culkin who left a series of traps for burgles, Harry and Marv. The burglars are who the package is addressed to.

Rober documented the process on his YouTube channel in a video sponsored by private network service provider company NordVPN.

Rober tested the box out, and received a notification while he was at work that the glitter bomb box had been taken. He followed the coordinates to a parking garage.

He recovered the box, and the recorded footage showed a man being covered by glitter, shouting profanity and clearly upset his car interior will be sparkle for days. 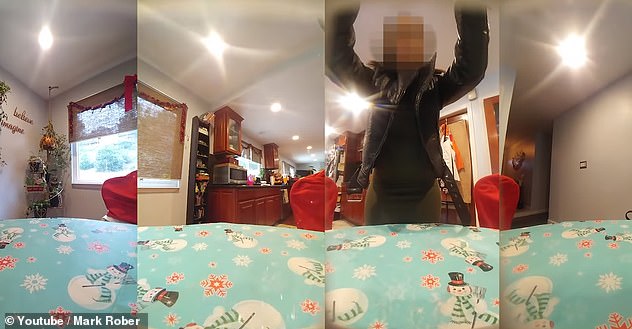 This woman is one of several people that fell for the bait package. After she sets it on her table the glitter releases everywhere- seconds later the fart bombs go off 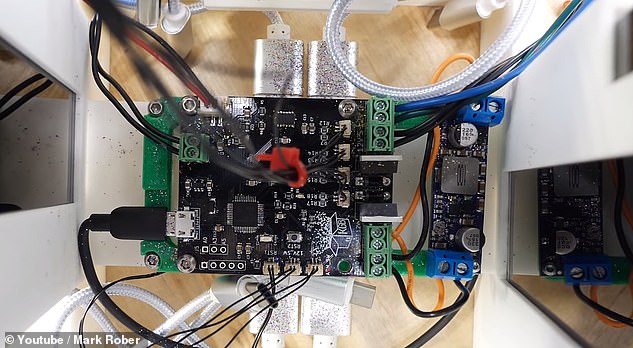