Do you even lift, bro? NASA footage reveals its Mars 2020 rover doing a ‘bicep curl’ that will let the robot grab samples from hard to reach places

It will be one of NASA’s most ambitious missions.

And, to prove its prowess, the U.S. space administration have released footage of Mars 2020 rover flexing its proverbial muscles – by performing heavyweight bicep curls.

In a time-lapse video taken at the Jet Propulsion Laboratory in California, earlier this month, the rover’s 7-foot-long (2.1-meter-long) arm handily maneuvers 88 pounds’ (40 kilograms’) worth of sensor-laden turret as it moves from a deployed to a stowed configuration.

The turret itself includes HD cameras, a scanning instrument, X-ray technology and a coring mechanism for digging into the red planet.

On Mars, the arm and turret will work together, allowing the rover to work as a human geologist would: by reaching out to interesting geologic features, abrading, analysing and even collecting them for further study.

This will be done via the Mars 2020’s Sample Caching System, which will collect samples of Martian rock and soil that will be returned to Earth by a future mission.

‘This was our first opportunity to watch the arm and turret move in concert with each other, making sure that everything worked as advertised — nothing blocking or otherwise hindering smooth operation of the system,’ said Dave Levine, integration engineer for Mars 2020.

‘Standing there, watching the arm and turret go through their motions, you can’t help but marvel that the rover will be in space in less than a year from now and performing these exact movements on Mars in less than two.’ 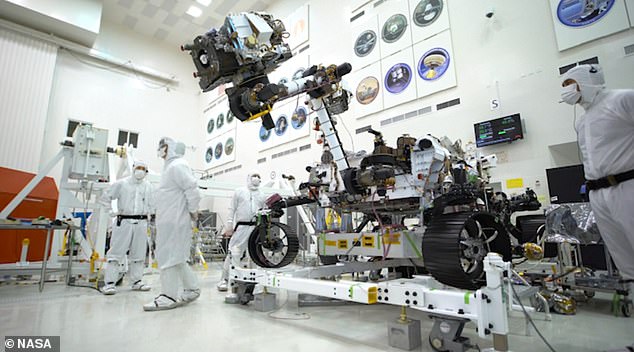 Buff: The rover’s 7-foot-long (2.1-meter-long) arm handily maneuvers 88 pounds’ (40 kilograms’) worth of sensor-laden turret as it moves from a deployed to a stowed configuration 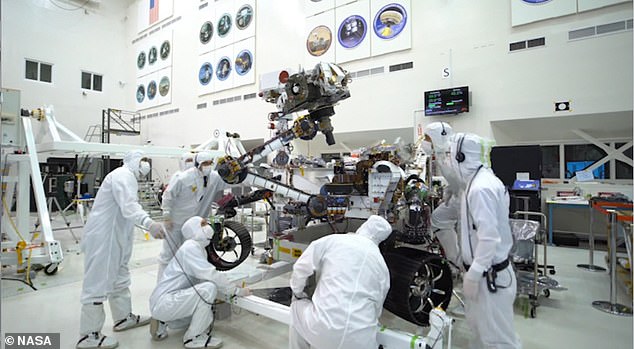 Agile: On Mars, the arm and turret will work together, allowing the rover to work as a human geologist would: by reaching out to interesting geologic features, abrading, analysing and even collecting them for further study

Charged with returning astronauts to the Moon by 2024, NASA’s Artemis lunar exploration plans will establish a sustained human presence on and around the Moon by 2028.

NASA will use what they learn on the Moon to prepare to send astronauts to Mars.

WHAT EQUIPMENT WILL THE MARS 2020 ROVER HAVE? 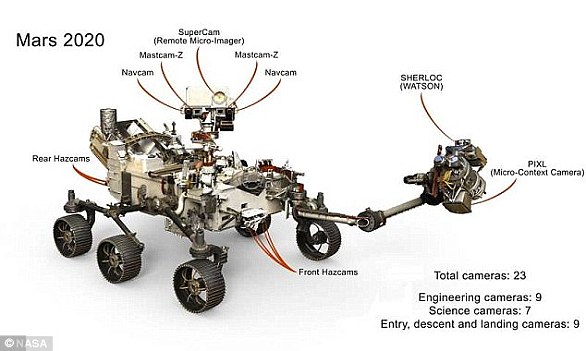 In the hopes of findings life on Mars during its 2020 mission, NASA has revealed that its new rover will have 23 cameras (artist’s impression pictured)