NASA is looking for ‘jokers’ to become astronauts

Astronauts have traditionally been serious, sensible types with the ‘right stuff’ who can be trusted to fly equipment worth billions of pounds.

But any mission to Mars will need a ‘joker’ or ‘class clown’ figure to be successful, according to NASA research.

A sense of humour will be vital for any team to keep morale high on a two-year trip to Mars which could happen in the 2030s.

This composite picture of Mars taken by Opportunity reveals the red surface of Mars. Astronauts travelling to the planet will be cooped up with one another in close proximity for several years, and NASA says crew members with a good sense of humour are essential

The joker role will be tested in NASA’s group mission simulations at the Johnson Space Centre in Houston, Texas.

Jeffrey Johnson, Professor of Anthropology at the University of Florida, Gainesville is advising NASA’s Human Exploration Research Analog, a project which looks at how teams can cope with extreme periods of isolation.

He addressed the the American Association for the Advancement of Science annual conference on ‘Building a Winning Team for Missions to Mars’.

Professor Johnson said: ‘Groups work best when they have somebody who takes on the role of class clown.

‘These are people that have the ability to pull everyone together, bridge gaps when tensions appear and really boost morale.

‘We can all think of the person at work who fulfills this role, who makes us laugh and makes the job more enjoyable. People like being around them.

‘When you’re living with others in a confined space for a long period of time, such as on a mission to Mars, tensions are likely to fray.

‘It’s vital you have somebody who can help everyone get along, so they can do their jobs and get there and back safely. It’s mission critical.

But he added: ‘Being funny won’t be enough to land somebody the job. They also need to be an excellent scientist and engineer and be able to pass a rigorous training regime.’ Professor Johnson has studied isolated groups of people in extreme environments including Russian, Chinese Indian and Polish explorers based in Antarctica. 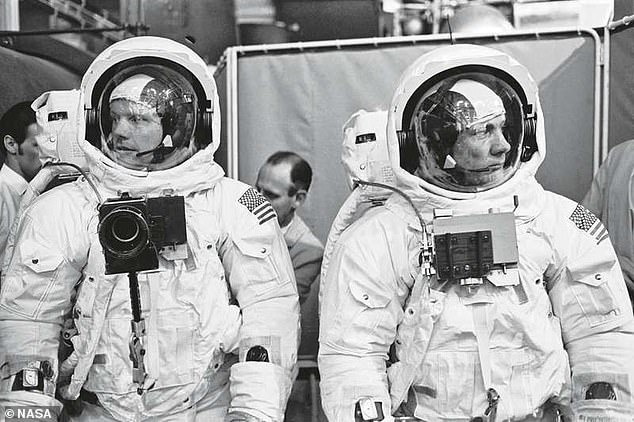 Previous missions, including the Apollo spacecraft with Neil Armstrong and Buzz Aldrin (pictured), were very sensible. Future missions will require staff with a good sense of humour and NASA says it will be vital for any team to keep morale high on a two-year trip to Mars

He has also looked at historical examples. Professor Johnson said that the reason Norwegian explorer Roald Amundsen succeeded where Captain Scott failed in reaching the South Pole was because the Norwegians had a jolly ‘clown’ figure on their team.

Professor Johnson said of Amundsen: ‘He had a cook named Adolf Lindstrom. People described him as being someone who laughed and was very jovial and very happy, an entertainer, keeping up people’s spirits.

‘In Amundsen’s diary he said he had rendered greater service to the Norwegian polar expedition than any other man. He was the clown of that expedition. Scott’s expedition was radically different. They broke into cliques; they didn’t have a cohesive group.’ ‘Astronauts going to Mars need a Lindstrom,’ he said.

But clowns have to be positive, Professor Johnson said.

‘There are people who are loving and laughable and jovial and endearing, and therefore bring people together. But others who are cruel. When I worked at the South Pole station there was lots of cruel behaviour. There’s a difference between button pushing and being funny. It’s better to become a mascot – get taken in by the group and loved.