NASA is renaming its Washington DC headquarters in honor of the first black female engineer to work at the American space agency – the ‘Mary W. Jackson NASA Headquarters building.’

Jackson, a mathematician and aerospace engineer, started her career in the segregated West Area Computing Unit of the agency’s Langley Research Center in Virginia.

While working at NASA, Jackson was one of three women who prepared astronaut John Glenn’s 1962 orbital mission as the US beat the Soviet Union (USSR) in the space race.

She was given the Presidential Medal of Freedom in 2015 and four years later, Jackson and her colleagues received Congressional Gold Medals.

NASA is renaming its Washington DC headquarters in honor of the first black female engineer to work at the American space agency – the ‘Mary W. Jackson NASA Headquarters building

‘Mary never accepted the status quo, she helped break barriers and open opportunities for African Americans and women in the field of engineering and technology.’

‘It appropriately sits on ‘Hidden Figures Way,’ a reminder that Mary is one of many incredible and talented professionals in NASA’s history who contributed to this agency’s success.’ 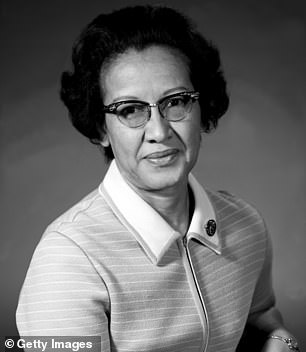 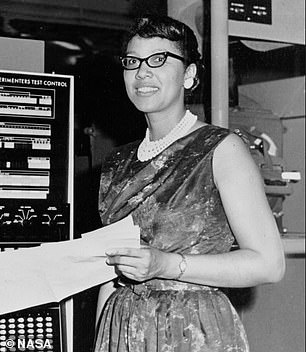 ‘Hidden no more, we will continue to recognize the contributions of women, African Americans, and people of all backgrounds who have helped construct NASA’s successful history to explore.’

Jackson, along with three other women were was largely forgotten until the book ‘Hidden Figures’ was released decades later by author Margot Lee Shetterly

The book was made into a popular movie that same year and Jackson’s character was played by award-winning actress Janelle Monáe, which highlights her work with follow NASA employees Katherine Johnson and Dorothy Vaughan.

Jackson, born in 1921, graduated from Hampton Institute in 1942 with a dual major in math and physical science.

After college, she took on a position as a math teacher, followed by a bookkeeper.

She finally landed a career in her field at the National Advisory Committee for Aeronautics in 1951 – the agency was succeeded by NASA seven years later.

Jackson started as a research mathematician where she met Johnson and Vaughn.

The three were known as ‘computers in skirts’ around the agency and were only provided with limited technology to carry out their work.

However, the three were key players in preparing astronaut John Glenn’s orbital mission. 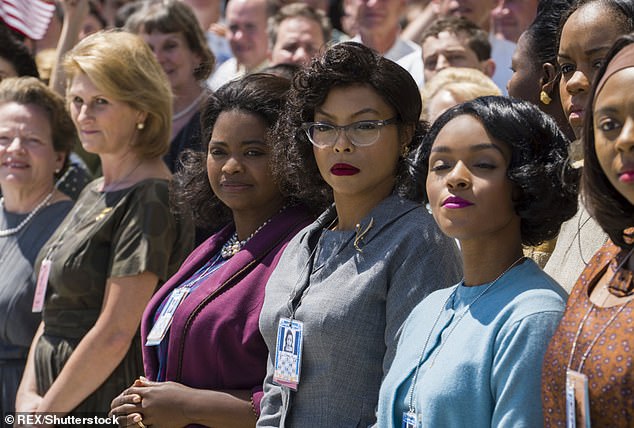 Jackson’s story was recreated in the 2016 Margot Lee Shettlerly book ‘Hidden ‘Hidden Figures: The American Dream and the Untold Story of the Black Women Mathematicians Who Helped Win the Space Race.’ The book was made into a popular movie that same year and Jackson’s character was played by award-winning actress Janelle Monáe (right)

According to NASA, Glenn did not put too much faith into electronic computers, and  would ask engineers to ‘get the girl,’ referring to Johnson, to run the same numbers through the same equations that had been programmed into the computer by hand.

After helping the US win the space race, Jackson was offered to work in the 4-foot by 4-foot Supersonic Pressure Tunnel, a 60,000 horsepower wind tunnel capable of blasting models with winds approaching twice the speed of sound.

Jackson was given the opportunity to conduct her own experiments that impressed her supervisor who suggested a training program for Jackson to earn a promotion from mathematician to engineer.

However, the classes were conducted in a segregated part of the school, Jackson had to seek prior permission to join her white classmates. 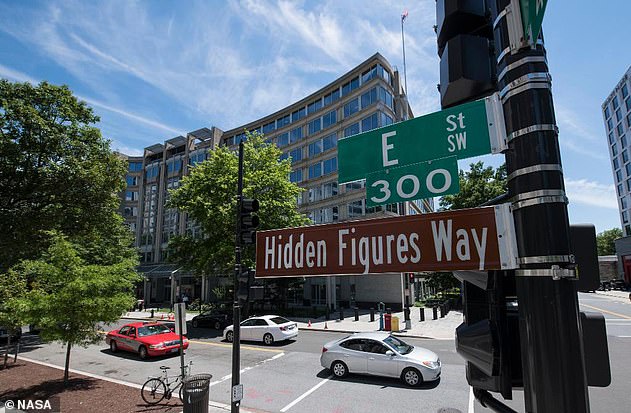 NASA unveiled the sign in a 2019 tweet saying: ‘Introducing Hidden Figures Way! Today, we honored our human computers by designating the street outside of our headquarters as a symbolic way to pay homage to their work that made spaceflight possible’

She worked as an engineer for nearly 20 years,  over this time she published a number or reports that mainly focused on the behavior of the boundary layer of air around airplanes.

In 1979, she joined Langley’s Federal Women’s Program, where she worked hard to address the hiring and promotion of the next generation of female mathematicians, engineers and scientists. Mary retired from Langley in 1985.

In 2019, President Donald J. Trump signed the Hidden Figures Congressional Gold Medal Act that posthumously awarded the honor to Jackson, who passed away in 2005, and her ‘Hidden Figures’ colleagues Katherine Johnson, Dorothy Vaughan, and Christine Darden.

‘NASA facilities across the country are named after people who dedicated their lives to push the frontiers of the aerospace industry,’ said Bridenstine

‘The nation is beginning to awaken to the greater need to honor the full diversity of people who helped pioneer our great nation.

‘Over the years NASA has worked to honor the work of these Hidden Figures in various ways, including naming facilities, renaming streets and celebrating their legacy.’

‘We know there are many other people of color and diverse backgrounds who have contributed to our success, which is why we’re continuing the conversations started about a year ago with the agency’s Unity Campaign.’

‘NASA is dedicated to advancing diversity, and we will continue to take steps to do so.’