NASA is plowing ahead with its plans to send humans back to the moon, selecting its first commercial partner for developing the lunar ‘Gateway.’

In a statement NASA announced that Maxar Technologies — formerly SSL — has been awarded $375 million to build power and propulsion systems for the lunar ‘Gateway,’ a small spaceship that will orbit the moon and act as a layover for astronauts on lunar missions.

From the ‘Gateway’ astronauts will board landers and make the descent to the moon’s service.

A power and propulsion element of the Gateway is a 50-kilowatt solar spacecraft. It’s three times more powerful than current capabilities. An artist’s impression is shown

As reported by Ars Technica, Maxar will be joined by Jeff Bezo’s aerospace company, Blue Origin, and Draper, who will help build, design, and operate the craft.

Ars Technica speculates that the collaboration may foreshadow the use of Blue Origin’s New Glenn rocket to help launch the propulsion systems.

NASA’s Gateway will have a modular design which will allow a the agency to add a yet-to-made human habitat and also a a solar-electric propulsion system capable of maneuvering the craft into different orbits around the moon.

‘This system requires much less propellant than traditional chemical systems, which will allow the Gateway to move more mass around the Moon, like a human landing system and large modules for living and working in orbit,’ said Mike Barrett, power and propulsion element project manager at NASA’s Glenn Research Center in Cleveland.

Various parts of the orbital waypoint will be propelled into space throughout 37 launches over the next several years.

‘This time when we’re going to the moon, we’re actually going to stay,’ said Bridenstein during an announcement at Florida Institute of Technology. 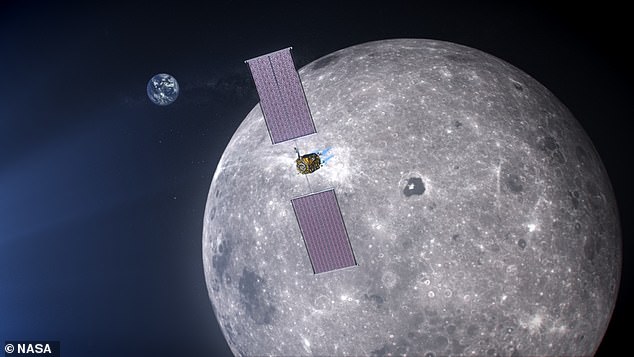 According to recent documents leaked from NASA, that human presence may entail more than just the gateway.

In a leaked timeline of NASA’s Artemis mission, a graphic suggest the deployment of a ‘lunar surface asset’ may be the initial stages of an outpost on the moon where future crews will be able to stay for longer-term missions.

Proponents of a moon base say the hub would increase access to resources like iron or uranium that may lie beneath the moon’s surface, and could benefit future launches into space. Theoretically missions that launch from the moon could be easier and less expensive to than those from Earth’s surface.

Likewise, the Gateway could be a feasible waypoint for future human missions into deep space. NASA is scheduled for a test on the abort systems of its Orion spacecraft which will eventually take humans farther into space than ever before.

WHAT IS THE LUNAR GATEWAY?

Russia and the United States are cooperating on a NASA-led project to build the first lunar space station, codenamed the Lunar Gateway.

The agreement, signed in September 2017, is part of a long-term project to send humans to Mars.

The crew-tended spaceport will orbit the moon and serve as a ‘gateway to deep space and the lunar surface,’ NASA has said.

The first modules of the station could be completed as soon as 2024. 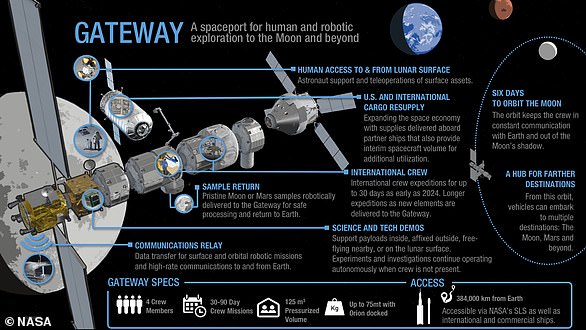 Russia and the United States are cooperating on a NASA-led project to build the first lunar space station, codenamed the Lunar Gateway

An international base for lunar exploration for humans and robots and a stopover for spacecraft is a leading contender to succeed the $100 billion International Space Station (ISS), the world’s largest space project to date.

Nasa asked European scientists and industry leaders to join the agency in September 2018.

Accepting the offer could cost the European Space Agency (ESA) – of which Britain is a key member – an estimated £1 billion ($1.3 billion).

A decision on whether to become involved will be taken at a meeting of European science ministers next year.

In the mean time, the ESA is drawing up plans for the form its section of the station could take.