NASA powers on solar study instrument that moves ‘like a sunflower’

NASA has developed a new instrument to study the sun.

The Total and Spectral Solar Irradiance Sensor (TSIS-1) became fully operational this month, after it was installed on the International Space Station.

NASA has developed a new instrument to study the sun. The TSIS-1 was launched with SpaceX Falcon 9 in December, but according to the space agency, it has now become part of the International Space Station. It can be seen getting extracted from the Dragon capsule above

After two weeks it was extracted and integrated onto the International Space Station, where it will remain permanently.

The TSIS-1 was then tested by the University of Colorado Laboratory for Atmospheric and Space Physics (LASP) for more than two months.

A statement from NASA explained the purpose the TSIS-1 will serve.

It said: ‘TSIS-1 studies the total amount of light energy emitted by the Sun using the Total Irradiance Monitor, one of two sensors onboard.

‘This sensor’s data will give us a better understanding of Earth’s primary energy supply and provide information to help improve models simulating the planet’s climate.

‘The monitor first started collecting science data – called “first light” – on January 11th after its doors were opened to fully view the Sun. The sensor extends a 40-year measurement of the sun’s total energy to Earth.’

The instrument installed on the ISS directs toward the sun. According to NASA, it operates like a sunflower and follows the Sun from sunrise to its sunset, which occurs every 90 minutes, as shown. At sunset, it rewinds, recalibrates and waits for the next sunrise

The TSIS-1’s other sensor, the Spectral Irradiance Monitor, can measure the distribution of the sun’s energy over the visible, infrared and ultraviolet light regions.

This is significant because every light wavelength interacts with our atmosphere differently, the NASA statement explained.

It said: ‘For instance, spectral irradiance measurements of the Sun’s ultraviolet radiation are critical to understanding the ozone layer – Earth’s natural sunscreen that protects life from harmful radiation. 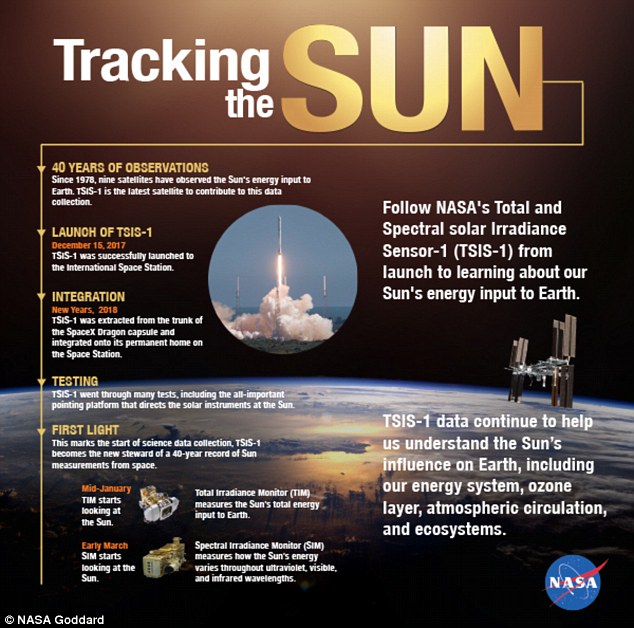 This diagram explains the role of the TSIS-1, which became fully operational this month and will be used to study the sun

WHAT IS THE EARTH’S ‘RADIATION BUDGET?’ 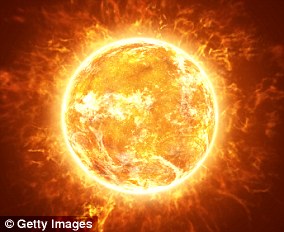 The earth system is comprised of the atmosphere, oceans, the earth’s surface and ice mass, and if it retains a higher amount of solar energy than the amount that it radiates to outerspace, the earth will, consequentially, warm up.

In contrast, if the earth system receives less energy from the sun than the amount that it radiates to space, earth will cool down.

For the next five years the TSIS-1 will be operated by NASA’s Goddard Space Flight Center.

NASA scientist Dong Wu said that the TSIS-1 has the potential to help researchers learn more about ‘the Sun’s influence on Earth’s radiation budget, ozone layer, atmospheric circulation, ecosystems and the effects that solar variability has on the Earth system and climate change’.

LASP was contracted by NASA to provide the solar irradiance measurements to Goddard Earth Science Data and Information Services Center.

LASP TSIS-1 lead scientist Peter Pilewskie said: ‘All systems are operating within their expected ranges. A lot of hard work remains for the team to interpret and validate the TSIS-1 data.’