The NASA spacecraft that explored Pluto has adjusted course as its next target looms.

That puts the spacecraft on track for a New Year’s Day flyby of a frigid world dubbed Ultima Thule.

The name comes from medieval maps and literature.

New Horizons became the first spacecraft to visit Pluto in 2015. 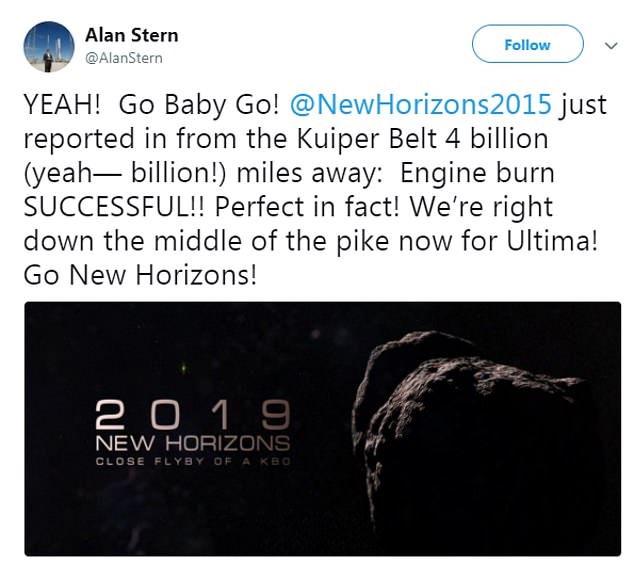 The news was met with jubilation from NASA controllers, including Alan Stern

So 13 years after rocketing from Florida, New Horizons will break its own record for humanity’s most distant tour of a cosmic object.

NASA’s New Horizons spacecraft has spotted its next flyby target from more than 100 million miles away.

The veteran craft is on its way to a Kuiper Belt object known as Ultima, which it’s expected to approach on Jan. 1, 2019.

Using its Long Range Reconnaissance Imager (LORRI), however, New Horizons has caught its first glimpse of the faraway object, suggesting it’s on the right path toward its orbit. NASA’s New Horizons spacecraft has spotted its next flyby target from more than 100 million miles away. In the image, Ultima is enveloped in countless stars, appearing as just a tiny speck amidst the bright spots. The yellow box shows its predicted location

A composite image of photos captured on August 16 and transmitted through NASA’s Deep Space Network shows the position of Ultima as it corresponds to its predicted location.

This is the team’s first attempt to find it with New Horizons’ cameras.

In the image, Ultima is enveloped in countless stars, appearing as just a tiny speck amidst the bright spots.

‘It really is like finding a needle in a haystack. In these first images, Ultima appears only as a bump on the side of a background star that’s roughly 17 times brighter – and easier to see – as the spacecraft gets closer.’

Over the next four months, New Horizons will get closer and closer until Ultima, before reaching its minimum distance on January 1.

When it completes the flyby, it will be the first-ever close investigation of a Kupier Belt object and the furthest planetary body ever studied.

New Horizons previously set this record when it studied Pluto. 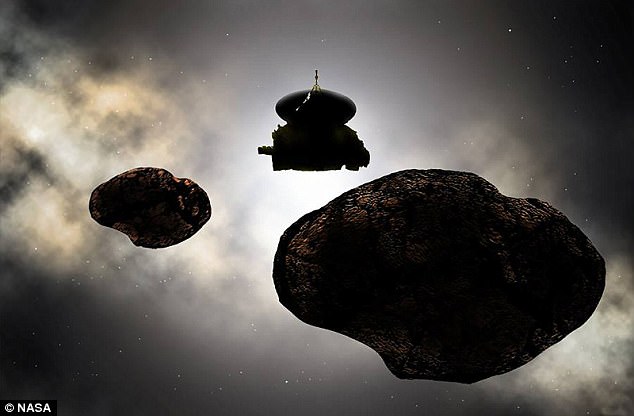 It remains unclear if Ultima is a single body, a binary pair, or a system of many objects. The veteran craft is on its way to the Kuiper Belt object, which it’s expected to approach on Jan. 1, 2019. Artist’s impression pictured

‘Our team worked hard to determine if Ultima was detected by LORRI at such a great distance, and the result is a clear yes,’ said New Horizons Principal Investigator Alan Stern, of the Southwest Research Institute.

Ultima, initially dubbed Ultima Thule, got its nickname earlier this year after the space agency solicited suggestions from the public.

The nickname comes from medieval literature and refers to a distant, unknown world.

After the flyby, however, it will likely receive another, more formal name.

It remains unclear if Ultima is a single body, a binary pair, or a system of many objects.