NASA releases compilation of the eerie ‘sounds’ of space

NASA has released a chilling compilation of the ‘sounds’ of space, bringing to life the radio emissions captured by its spacecraft as they journey across the solar system.

The collection, shared in a new playlist on Soundcloud, includes everything from the roaring warble of lightning on Jupiter to the eerie boom of starlight.

To reveal the elusive ‘sounds,’ scientists converted the radio emissions collected across the various missions into sound waves.

The compilation includes 22 snippets of ‘space sounds,’ revealing a stunning new perspective on the planets and other mysterious objects in our solar system. Some examples from the playlist are

The space agency has released its ‘Spooky Sounds from Across the Solar System’ playlist ahead of Halloween.

The compilation includes 22 snippets of ‘space sounds,’ revealing a stunning new perspective on the planets and other mysterious objects in our solar system.

‘Soaring to the depths of our universe, gallant spacecraft roam the cosmos, snapping images of celestial wonders,’ NASA says.

‘Some spacecraft have instruments capable of capturing radio emissions. When scientists convert these to sound waves, the results are eerie to hear.’

The list includes a clip from when the Juno spacecraft crossed the boundary of Jupiter’s magnetic field on June 24, 2016, capturing its remarkable encounter with the bow shock over two hours.

The collection, shared in a new playlist on Soundcloud , includes everything from the roaring warble of lightning on Jupiter to the eerie boom of starlight. It also includes data collected from Cassini’s Saturn mission

In May, NASA released the eerie sound of ‘the big empty’ – the void between Saturn and its rings – that was recorded for the first time during the voyage of the Cassini spacecraft.

Scientists used the craft’s sensors to measure the amount of dust in the area on April 26, then converted the data – measuring each dust particle that collided with the sensor – into sound.

The result is an unsettling series of crackles, whorls and snarls that sounds – quite literally – out of this world.

RESEARCHERS REVEAL THE ‘SONGS’ OF SATURN

In homage to the historic Cassini mission, the researchers from the Canadian Institute for Theoretical Astrophysics (CITA) created two pieces of music based on Saturn’s moons and rings.

As the objects remain locked in this repeating pattern, they exert rhythmic gravitational tugs, which can then be converted into musical harmony.

‘Wherever there is resonance there is music, and no other place in the solar system is more packed with resonances than Saturn,’ said astrophysicist Matt Russo, a postdoctoral researcher at the CITA in the Faculty of Arts and Science at U of T.

Based on the orbital motion of the objects circling the ringed planet, a team of astrophysicists has created the soundtrack of Saturn, revealing the hidden notes and rhythms of frequencies typically imperceptible to human ears.

Each whistle and squeak is a single wave in the charged particle environment that Cassini’s Radio and Plasma Wave Science (RPWS) sensor is designed to detect.

Had the area contained more dust, those noises would have been drowned out by the cracks and pops as the particles struck the sensor.

The team’s analysis suggests Cassini only encountered a few particles as it crossed the gap – none larger than those in smoke, at around 1 micron across – or a millionth of a metre. 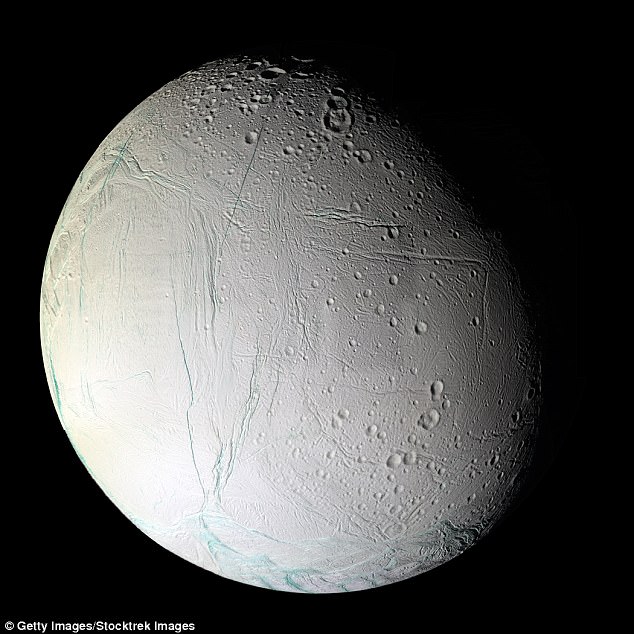 The compilation includes 22 snippets of ‘space sounds,’ revealing a stunning new perspective on the planets and other mysterious objects in our solar system, such as Saturn’s moon Enceladus

‘It was a bit disorienting – we weren’t hearing what we expected to hear,’ William Kurth, leader of the RPWS team at the University of Iowa, Iowa City, said at the time.

‘I’ve listened to our data from the first dive several times and I can probably count on my hands the number of dust particle impacts I hear.’

Cassini ended its mission on September 15, in a dramatic plunge through Saturn’s atmosphere.

Scientists say they’ll be studying the data collected by the craft for years to come.