NASA has revealed its much delayed and hugely over budget James Webb Space Telescope will finally launch in 2021.

An Independent Review Board (IRB) established by NASA to assess progress on the project today unanimously recommended that the project should go ahead, prompting NASA to established a new launch date for Webb of March 30, 2021.

The vast telescope, which has already cost more than $7 billion (£5 billion), is considered a successor to the orbiting Hubble Space Telescope.

Officials say they need more time to assemble and test the James Webb Space Telescope (pictured), which is now set to fly in 2021

WHAT WILL THE JAMES WEBB TELESCOPE DO?

Originally, the observatory was supposed to fly this year, but then in autumn the space agency pushed the launch back to 2019, then 2020, before revealing today’s 2021 date.

It has hit a plethora of technical problems and cost overruns.

‘Webb should continue based on its extraordinary scientific potential and critical role in maintaining U.S. leadership in astronomy and astrophysics,’ said Tom Young, the chair of the review board.

‘Ensuring every element of Webb functions properly before it gets to space is critical to its success.’

The telescope’s new total lifecycle cost, to support the revised launch date, is estimated at $9.66 billion; its new development cost estimate is $8.8 billion.

NASA Administrator Jim Bridenstine said: ‘Webb is vital to the next generation of research beyond NASA’s Hubble Space Telescope.

‘It’s going to do amazing things – things we’ve never been able to do before – as we peer into other galaxies and see light from the very dawn of time.

‘Despite major challenges, the board and NASA unanimously agree that Webb will achieve mission success with the implementation of the board’s recommendations, many of which already are underway.’

NASA’s James Webb Space Telescope, the most ambitious and complex space observatory ever built, will use its unparalleled infrared capabilities to study Jupiter’s Great Red Spot, shedding new light on the enigmatic storm and building upon data returned from NASA’s Hubble Space Telescope and other observatories.

Jupiter’s iconic storm is on the Webb telescope’s list of targets.

Leigh Fletcher, a senior research fellow in planetary science at the University of Leicester in the United Kingdom, is the lead scientist on the Webb telescope’s observations of Jupiter’s storm. 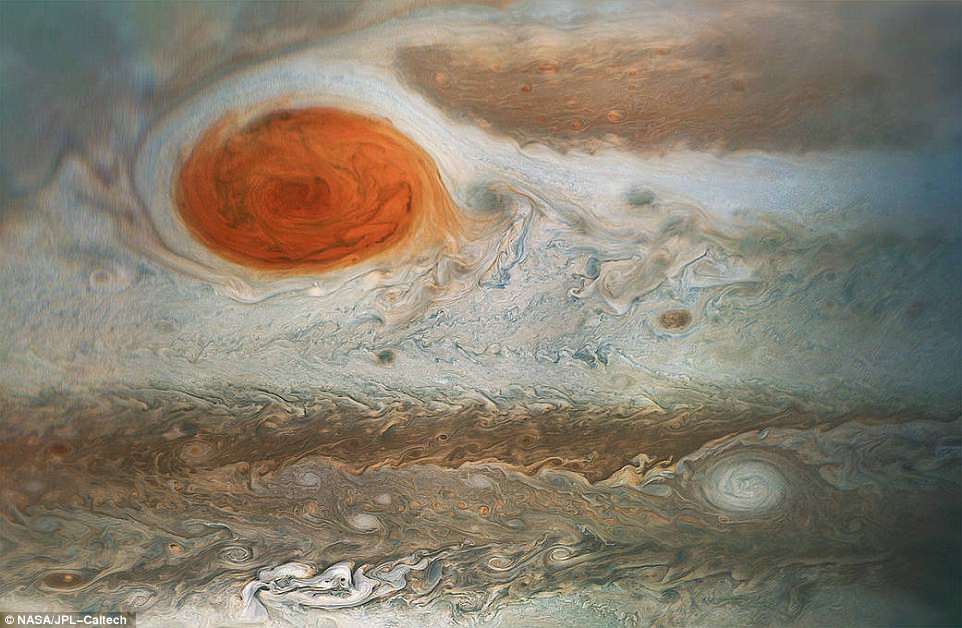 “Hubble images have revealed striking changes in the size of the Great Red Spot over the mission’s multi-decade-long lifetime.”

Fletcher and his team plan to use Webb’s mid-infrared instrument (MIRI) to create multispectral maps of the Great Red Spot and analyze its thermal, chemical and cloud structures.

The scientists will be able to observe infrared wavelengths that could shed light on what causes the spot’s iconic color, which is often attributed to the sun’s ultraviolet radiation interacting with nitrogen, sulfur and phosphorus-bearing chemicals that are lifted from Jupiter’s deeper atmosphere by powerful atmospheric currents within the storm.

After its launch, the observatory will complete an intricate and technically-challenging series of deployments – one of the most critical parts of Webb’s journey to its final orbit, about one million miles from Earth.

When completely unfurled, Webb’s primary mirror will span more than 21 feet (6.5 meters) and its sunshield will be about the size of a tennis court.

‘The more we learn more about our universe, the more we realize that Webb is critical to answering questions we didn’t even know how to ask when the spacecraft was first designed,’ said Thomas Zurbuchen, associate administrator for NASA’s Science Mission Directorate. 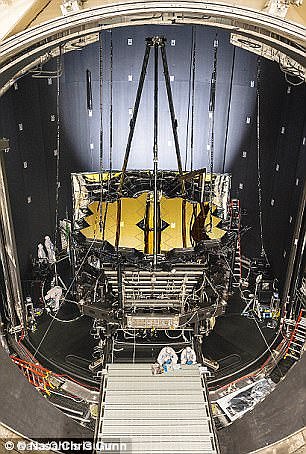 ‘Webb is poised to answer those questions, and is worth the wait.

‘The valuable recommendations of the IRB support our efforts towards mission success; we expect spectacular scientific advances from NASA’s highest science priority.’

In its report, the IRB found that technical issues, including human errors, have greatly impacted the development schedule.

Once the spacecraft element has completed its battery of testing, it will be integrated with the telescope and science instrument element, which passed its tests last year.

The fully-assembled observatory then will undergo a series of challenging environmental tests and a final deployment test before it is shipped to the launch site in Kourou, French Guiana.

WHAT IS THE JAMES WEBB TELESCOPE? 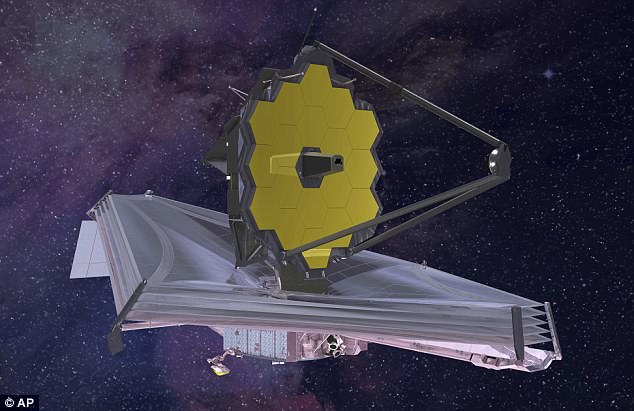 Officials say the cost may exceed the $8 billion (£5.6 billion) program cap set by Congress. The space agency has already poured $7 billion (£5 billion) into the telescope.

When it is launched in 2020, it will be the world’s biggest and most powerful telescope, capable of peering back 200 million years after the Big Bang.

In January the telescope had been successfully tested in a giant vacuum chamber at the Johnson Space Centre – proving it will function in deep space.