NASA plans to send a probe where no probe has been before, flying to the edge of the heliosphere by the early 2030s to understand how the solar system formed.

The heliosphere is the bubble of space surrounding the sun and enclosing all the planets, from Mercury to Neptune and is affected by solar winds.

So far Voyager 1 and Voyager 2, launched in 1977, are the only probes to venture outside the heliosphere, currently 14 and 11 billion miles from Earth respectively.

The Voyagers discovered the edge of the bubble but left scientists with many questions about how our star interacts with the local interstellar medium.

The twin Voyagers’ instruments provide limited data, leaving critical gaps in our understanding, so NASA and partners are planning a more ambitious mission.

Currently dubbed the Interstellar Probe, NASA wants to send the spacecraft out to 1,000 AU (astronomical units) in the 2030s, that is 1,000 times further than the distance between the Earth and the sun, or about 92 billion miles.

Along the way to that 1,000 AU, marking the inner edge of the Oort Cloud, a 100,000 AU stretch of ancient comets and icy rocks, it will examine the heliosphere, planets and more.

The probe will venture as far as the edge of the Oort Cloud at 1,000 AU or 92 billion miles from the Sun, observing the Heliosphere and Kuiper Belt on the way

Simply named Interstellar Probe, NASA and John Hopkins University plan to send it out further than any probe sent from Earth before it

If you could leave the Earth and travel vertically through its atmosphere, you may expect eventually to reach empty space – a void of darkness where nothing exists.

The space around the Earth, however, is far from empty.

Charged particles (electron and ions) streaming away from the Sun envelop our planet and its neighbours in a magnetic bubble.

The heliosphere is the bubble this solar wind blows out into the local interstellar medium.

It defines the volume of space over which our Sun’s influence predominates.

That influence reaches way beyond what we normally think of as the solar system.

The closest boundary of the heliosphere is thought to extend about 100 AU out from the Sun.

That is 100 times the distance of the Earth from the Sun and at least twice as far out as the Kuiper belt, which contains the most distant objects in the solar system.

The ‘Interstellar Probe’ will go into unknown local interstellar space where humanity has never reached before, according to probe lead Elena Provornikova.

John Hopkins Applied Physics Lab are working with NASA on the probe proposal, with Provornikova explaining that ‘for the first time, we will take a picture of our vast heliosphere from the outside to see what our solar system home looks like.’

Provornikova and her colleagues will discuss the heliophysics science opportunities for the mission at the European Geosciences Union (EGU) General Assembly 2021.

There are about 500 scientists, engineers and enthusiasts involved in the project on both a formal and informal basis from around the world.

The mission plans to take ‘images’ of our heliosphere using energetic neutral atoms, and perhaps even ‘observe extragalactic background light from the early times of our galaxy formation – something that can’t be seen from Earth,’ Provornikova says.

Scientists also hope to learn more about how our sun interacts with the local galaxy, which might then offer clues as to how other stars in the galaxy interact with their interstellar neighborhoods, she says.

The heliosphere is also important because it shields our solar system from high-energy galactic cosmic rays.

The sun is traveling around in our galaxy, going through different regions in interstellar space, Provornikova says.

The sun is currently in what is called the Local Interstellar Cloud, but recent research suggests the sun may be moving toward the edge of the cloud, after which it would enter the next region of interstellar space – which we know nothing about.

Such a change may make our heliosphere grow bigger or smaller or change the amount of galactic cosmic rays that get in and contribute to the background radiation level at Earth, she says.

This is the final year of a four-year ‘pragmatic concept study,’ in which the team has been investigating what science could be accomplished with this mission. 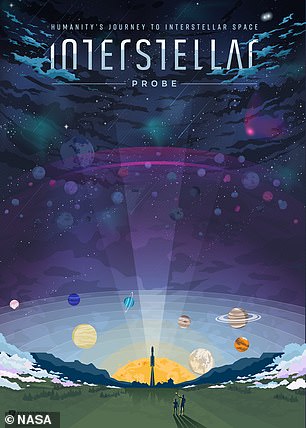 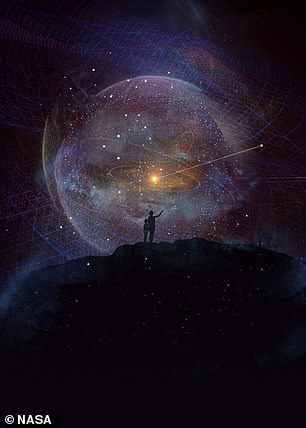 NASA plans to send the probe out to 1,000 AU, that is a thousand times further than the Earth is from the sun 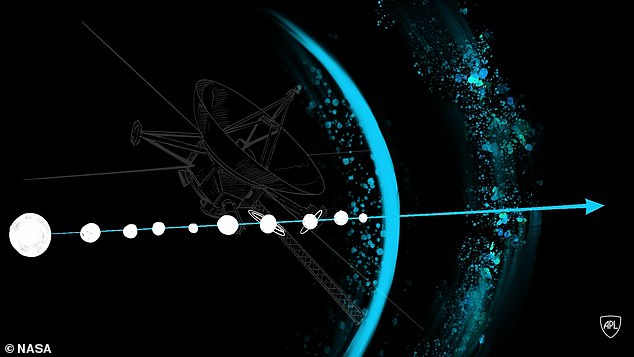 At the end of the year, the team will deliver a report to NASA that outlines potential science, example instrument payloads, and example spacecraft and trajectory designs for the mission.

‘Our approach is to lay out the menu of what can be done in such a space mission,’ Provornikova says.

The mission could launch in the early 2030s and would take about 15 years to reach the heliosphere boundary – a pace that’s quick compared to the Voyagers, which took 35 years to get there.

The current mission design is planned to last 50 years or more, exploring as much of the region as possible before it runs out of power.

Details of the proposed mission are being presented at the EGU General Assembly 2021.

Voyager 1 is currently 14 billion miles away from Earth, travelling northward through space.

The probe has sent back data to NASA once it reached interstellar space that cosmic rays are as much as four times more abundant in that region, beyond the sun’s direct influence, than in the vicinity of Earth.

Voyager 2 crossing into the interstellar medium allows scientists to sample the medium from two different locations at the same time.