NASA has revealed a range of stunning panoramic images to commemorate the 50th anniversary of the Apollo 11 moon landing.

Incredible panoramic images of the Apollo landing site were made by stitching together pre-existing photos to create a brand new way of looking at the lunar surface.

Individual images taken by the Apollo astronauts were pulled together by NASA imagery specialist Warren Harold  and their accuracy verified by Apollo 17 astronaut and geologist  Harrison ‘Jack’ Schmitt.

NASA has revealed a range of stunning panoramic images to commemorate the 50th anniversary of the Apollo 11 moon landing. It includes this panorama view of the Apollo 12 lunar surface

‘The Valley of Taurus-Littrow on the Moon presents a view that is one of the more spectacular natural scenes in the Solar System,’ Mr Schmitt said about the images stitched together from his Moon base Station 5 at the Taurus-Littrow landing site.

‘The massif walls of the valley are brilliantly illuminated by the Sun, rise higher than those of the Grand Canyon, and soar to heights over 4,800 feet on the north and 7,000 feet on the south,’ Mr Schmitt added.

‘At the same time, the summits are set against a blacker than black sky – a contrast beyond the experience of visitors from Earth.

‘And, over the South Massif wall of the valley, one can always see home, the cloud-swirled blue Earth, only 250,000 miles away.’

NASA has spent the entire week preparing tributes to the astronauts that walked on the moon for the first time almost 50 years ago on July 20 1969.

Neil Armstrong and Buzz Aldrin became the first two people on the moon and have only followed by ten others since – all American men.

Michael Collins, their colleague who remained in the Colombia module during the 21.5 hours on the moon, was recently back at the launch site in Cape Canaveral.

Panorama view of Apollo 15 lunar module pilot James B. Irwin, using a scoop in making a trench in the lunar soil during the second moonwalk of the mission

An u close image of James Irwin of Apollo 15. The panoramas were made up of various stills taken on the surface (pictured) 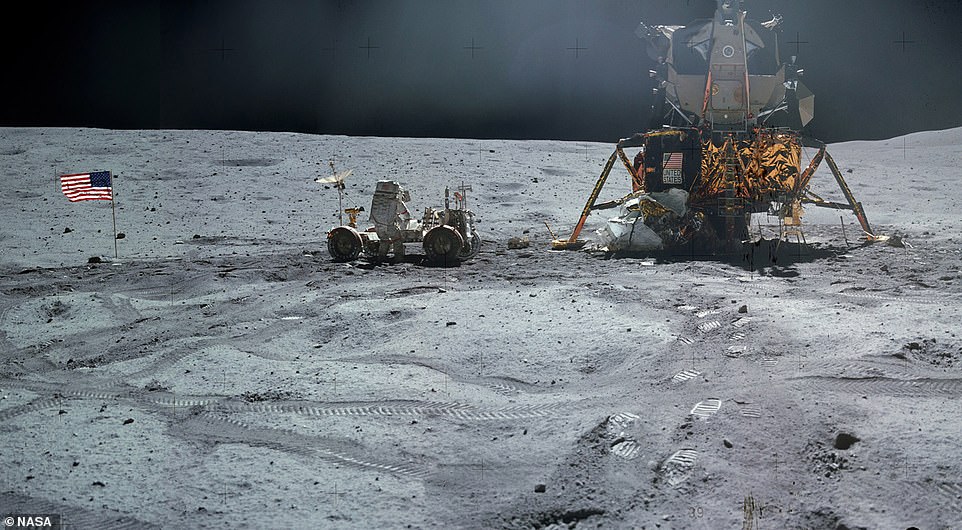 Panorama view of Apollo 16 commander Astronaut John W. Young, working at the Lunar Roving Vehicle. John Young and Charles Duke lunar orbit and the mission almost had to be aborted because of a problem with Command/Service Module’s main engine

He returned to the iconic location on July 16, 50 years to the day since the Saturn V rocket carrying the astronauts lifted off.

Buzz Aldrin was not in attendance and simultaneously there were moves to honour the late Neil Armstrong who died in 2012.

Vice President of the US Mike Pence honoured the late Neil Armstrong in a speech watched by the late astronaut’s wife, son and grandson, Mr Pence praised Armstrong’s courage and ‘incredible accomplishment’.

‘The risks were great, the odds were long, and they were so long that some even feared that if we could make it to the moon we might not be able to make it back,’ he said.

‘I expect it is moving for his family and for every family to remember the dangers and the risks at the time that this spacesuit simply may have been the very last thing that Neil Armstrong ever wore, in fact, there was a time and during that time that scientists speculated whether when a lunar module like this one behind me landed on the moon, whether it would be able to lift off again.

He continued: ‘His courage was displayed perhaps nowhere more profoundly than in the moments just before the Apollo 11 lunar module landed on the surface of the moon, it was that coolness during the original landing that likely saved the lives of the two astronauts that were aboard the lunar module.

‘When the original landing area turned out to be so full of large boulders that landing there would have doomed the mission and the crew, history records again that Neil Armstrong calmly took the control of the module, skimmed across the top of the lunar surface and manually found a safe spot to touch down. By the time he set down, Armstrong and Aldrin had 17 seconds of fuel left remaining. It’s incredible.’