NASA is being ridiculed for its ‘idiotic’ decision to stop using the nicknames for two celestial phenomena – the Eskimo Nebula and Siamese Twins Galaxy – because of their ‘colonial’ implications.

The American space agency announced the move on Wednesday, writing in a statement: ‘As the scientific community works to identify and address systemic discrimination and inequality in all aspects of the field, it has become clear that certain cosmic nicknames are not only insensitive, but can be actively harmful.’

One of the now-defunct monikers, Eskimo Nebula, was given to the glowing remains of a star located roughly 5,000 light years from Earth when it was first observed back in 1787.

The nickname arose because the outer disk surrounding the nebula, composed of materials still being cast off from its core, resembles the fur-lined hood of a parka.

But now the celestial body will simply be referred to by its International Astronomical Union designation: NGC 2392.

‘”Eskimo” is widely viewed as a colonial term with a racist history, imposed on the indigenous people of Arctic regions,’ NASA explained in its statement. ‘Most official documents have moved away from its use.’

A pair of spiral galaxies that were previously dubbed the Siamese Twins Galaxy because they orbit around each other in the Virgo Galaxy Cluster will now also be identified by their official names, NGC 4567 and NGC 4568.

NASA is facing backlash over its decision to stop using the nicknames for two celestial phenomena – the Eskimo Nebula and Siamese Twins Galaxy – because of their ‘colonial’ implications. The Eskimo Nebula (pictured) – which received that nickname after it was first observed in 1787 – will now simply be referred to by its official moniker NGC 2392 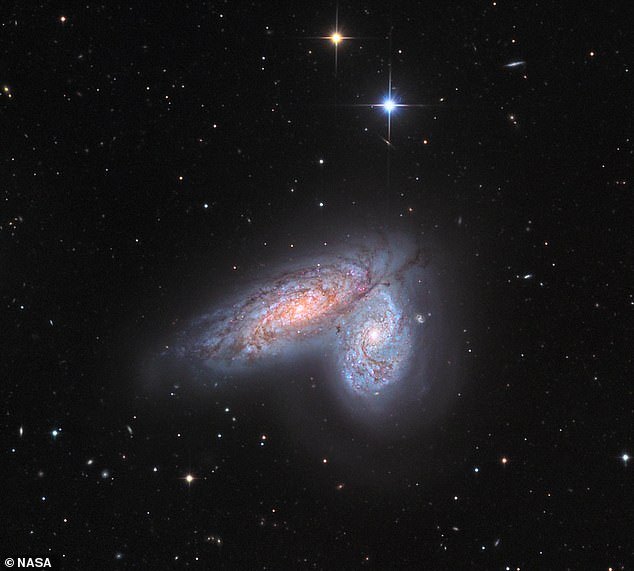 A pair of spiral galaxies (pictured) that were previously dubbed the Siamese Twins Galaxy because they orbit around each other in the Virgo Galaxy Cluster will now also be identified by their official names, NGC 4567 and NGC 4568

NASA announced the decision to scrap the nicknames on Wednesday, calling it an ‘initial step’ in the agency’s ‘commitment to diversity, equity and inclusion’

NASA did not specify why it chose to scrap the name ‘Siamese Twins’ in its statement, although the term has long been viewed as offensive because it unfairly ties the birth defect of conjoined twins to the region of Thailand, formerly Siam.

The agency said that weeding out the nicknames was a first step in its ‘commitment to diversity, equity and inclusion’.

‘These nicknames and terms may have historical or culture connotations that are objectionable or unwelcoming, and NASA is strongly committed to addressing them,’ Stephen T Shih, Associate Administrator for Diversity and Equal Opportunity at NASA Headquarters, said in the statement.

‘Science depends on diverse contributions, and benefits everyone, so this means we must make it inclusive.’

While some praised NASA’s decision to discontinue the names, others responded on Twitter by berating the agency for bowing to ‘woke’ culture.

‘Your job, @NASA, is to explore space & understand the cosmos. Not to appease the woke cult through virtue signalling,’ psychologist Geoffrey Miller tweeted.

Tom Fitton, president of the conservative nonprofit Judicial Watch, tweeted: ‘Who runs @NASA that they would allow this government agency engage if [sic] leftist race baiting?’

Conservative commentator Ann Coulter wrote: ‘How many NASA engineers did it take to determine that calling a star the “Eskimo Nebula” is “actively harmful”?’

While some praised NASA’s decision to discontinue the names, many others responded on Twitter by berating the agency for bowing to ‘woke’ culture

Despite the backlash NASA said it intends to seek guidance from ‘diversity, inclusion, and equity experts’ to determine what other nicknames and terms should be reviewed.

Thomas Zurbuchen, associate administrator of NASA’s Science Mission Directorate, signaled his support for the ongoing reevaluation efforts in the statement.

‘Our goal is that all names are aligned with our values of diversity and inclusion, and we’ll proactively work with the scientific community to help ensure that,’ Zurbuchen said.

‘Science is for everyone, and every facet of our work needs to reflect that value.’

NASA’s move to discard the nicknames comes as a number of companies and sports teams have faced calls to confront racist roots in their names and mascots amid a nationwide movement calling for racial justice in the wake of the death of George Floyd, a black man who died when a white Minneapolis cop knelt on his neck during an arrest on May 25.

The Washington Redskins baseball team retired their contentious nickname and logo after decades of objection on July 13, and amid pressure from sponsors.

The Canadian Football League’s Edmonton Eskimos followed suit last week by retiring the latter half of their name because the term came to be seen as a racial slur following years of discrimination against Inuit peoples.

NGC 2392 is a planetary nebula roughly 5,000 light years from Earth that was first discovered in 1787 by  astronomer William Herschel.

It was believed to have begun forming more than 10,000 years ago when an aging star began casting off its outer layers after running out of fuel.

The nebula gained its ‘Eskimo’ nickname because its expanding ring of gas resembles the hood of a fur-lined parka.

NGC 4567 and NGC 4568 are a pair of spiral galaxies orbiting around each other in the Virgo Galaxy Cluster more than 65 million light years from Earth.

The galaxies were both discovered by astronomer William Hershel in 1784.

Over time they became known as the Siamese Twins Galaxy or the Butterfly Galaxy due to their close proximity.