Plant life is starting to become more abundant higher up Mount Everest, according to a new study, and it’s very likely due to global warming.

British scientists used 25 years of NASA satellite data to measure increases in vegetation that is able to grow underneath snow – known as subnival vegetation.

The University of Exeter team found increases in subnival vegetation stretching 13,600 feet to 19,600 feet up the mountain range.

Conditions at the top of this height range – around 20,000 feet – have generally been considered to be close to the limit of where plants can grow due to ice.

These remote grasses and shrubs now cover between five to 15 times the area of permanent glaciers and snow on the Hindu Kush Himalayan Region.

WHAT IS THE HINDU KUSH HIMALAYAN REGION?

The Hindu Kush Himalayas (HKH) are the freshwater towers of South Asia and parts of Southeast Asia.

Water originating from their snow, glaciers and rainfall feed the ten largest river systems in Asia.

Together these rivers support the drinking water, irrigation, energy, industry and sanitation needs of more than a billion people living in the mountains and downstream.

Along with a rapidly increasing population which is placing greater demands on water resources, climate change is affecting water availability throughout the HKH and beyond.

Subnival vegetation is now expanding across the Himalayan region, having implications for rivers that supply more than 1.4 billion people with water.

The more water that is being used to feed plant life at higher parts of the mountain, the smaller the water supply for people near the bottom, including for irrigation and sanitation.

‘It’s important to monitor and understand ice loss in major mountain systems, but subnival ecosystems cover a much larger area than permanent snow and ice and we know very little about them and how they moderate water supply,’ said Dr Karen Anderson of the Environment and Sustainability Institute on Exeter’s Penryn Campus in Cornwall.

‘Snow falls and melts here seasonally, and we don’t know what impact changing subnival vegetation will have on this aspect of the water cycle – which is vital because this region – known as “Asia’s water towers”– feeds the ten largest rivers in Asia.’

Mount Everest ecosystems are made up of short plants – predominantly grasses and shrubs – and seasonal snow. 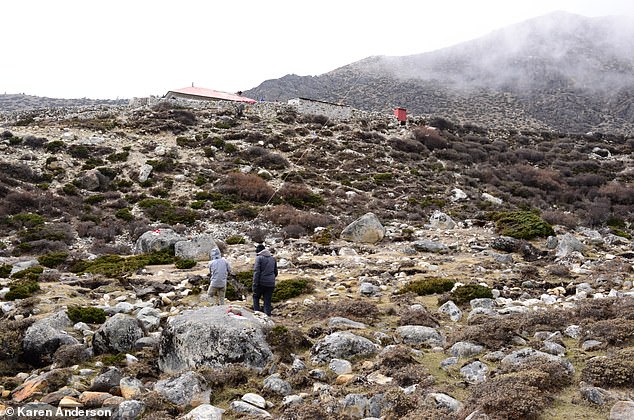 The strongest trend in increased vegetation was observed in the third-highest bracket – 16,404 to 18,044 feet above sea level.

The study, which has been published in the journal Global Change Biology, doesn’t examine the cause of the change in plant growth; however, the findings are consistent with modelling that points to global warming.

‘There are lots of possible drivers for vegetation changes like this, and these would be expected – over an area as large as the Himalaya – to be quite diverse and spatially variable,’ Dr Anderson told MailOnline.

‘They could include things like changes in land use, increases in atmospheric CO2 which can influence plant photosynthesis – some plants are more sensitive than others – changes in temperature, changes in precipitation and snow cover, and changes in the prevalence of other types of disturbance.

‘Climate change of course underlies some of these things – particularly changes in temperature and precipitation and we know that the Himalaya are one of the areas on the globe on the front line of climate change.’ 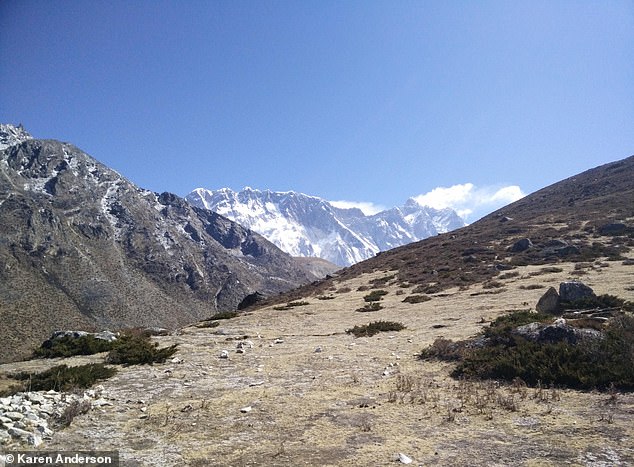 Mount Everest sits in the vast mountain range known as the Himalayas, which covers the countries of Bhutan, China, India, Nepal and Pakistan.

The Himalayan region has the largest concentration of ice on Earth, apart from the polar caps, and provides around 86,000,000 cubic metres of water annually, according to the WWF.

Dubbed the ‘water towers of Asia’, the frozen Hindu Kush and Himalayan ranges also include the second-highest mountain in the world, K2, at 28,251 feet.

The University of Exeter team used Google Earth Engine, a free cloud-based geospatial processing platform, to quicken up the data processing tasks for the study.

‘These large-scale studies using decades of satellite data are computationally intensive because the file sizes are huge,’ said Dominic Fawcett, at the University of Exeter, who coded the image processing.