By Afp and Jonathan Chadwick For Mailonline

NASA has finally finished building its giant rocket that will take US astronauts back to the Moon, the space agency’s administrator Jim Bridenstine announced on Monday.

The Space Launch System (SLS) will launch the first woman and the next man to the moon in 2024, as part of the Artemis 3 mission.

Before that, it will carry out several unmanned test flights, the first of which is scheduled to take place in June 2020 – almost two years later than originally planned.

The SLS is the tallest rocket ever built at a towering height of 212 feet (65 meters) – the equivalent of a 20-story building.

It is also the most powerful, designed to reach a record-breaking speed of Mach 23 (17,647.2 mph) before separating from its upper stage, the Orion crew capsule.

This NASA image obtained December 9, 2019 shows engineers and technicians as they attach the last of four RS-25 engines that will provide the necessary thrust for the SLS rocket

Mr Bridenstine was in New Orleans to see the first of the ‘core stage’ rockets for the SLS at the Michoud Assembly Center in New Orleans, Louisiana.

The rocket’s core will store cryogenic liquid hydrogen and liquid oxygen, as well as flight computers and much of the avionics needed to control the rocket’s flight.

At the Michoud Assembly Facility in New Orleans, Mr Bridenstine called it a ‘very important day’ for the space agency ‘when we get to announce core stage complete’  for the SLS in  preparation of the 2024 launch.

‘We are making significant progress towards achieving that Artemis 3 mission and getting our first woman, and next man to the south pole of the Moon in 2024.’ 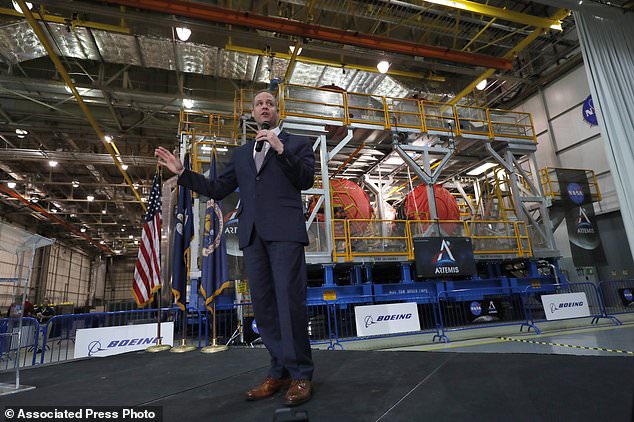 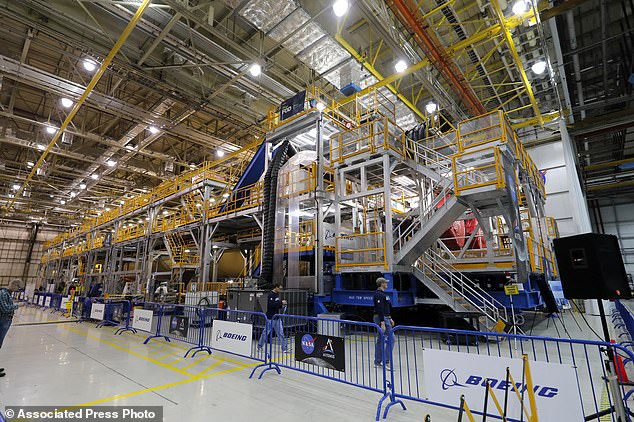 The rocket, 212 feet (65 meters) tall and more than 27 feet (8 meters) in diameter, is to be loaded on a barge by the end of this year for transport to the Stennis Space Center in neighbouring coastal Mississippi.

SLS has been in development since 2011 and once finished, will be the primary launch vehicle for the agency’s Artemis program, which aims to put the first woman on the moon by 2024.

According to NASA, the first non-reusable rocket is to be launched for a test flight carrying a spacecraft without a crew, a mission known as Artemis I, which will likely take off by June 2020.

HOW DOES NASA’S SPACE LAUNCH SYSTEM ROCKET MEASURE UP?

The rocket will have an initial lift configuration, set to launch in the mid-2020’s, followed by an upgraded ‘evolved lift capability’ that can carry heavier payloads. Nasa is yet to set a timeline for SLS’s second iteration. 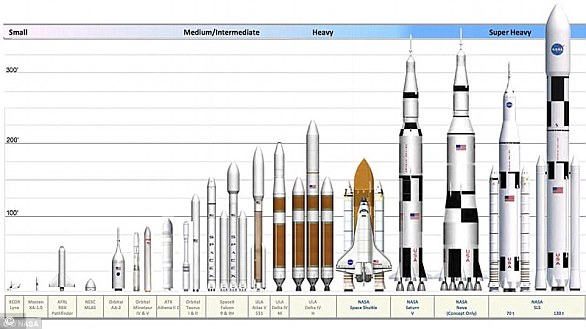 NASA’s Space Launch System will have an initial lift configuration (second from right), set to launch in the mid-2020’s, followed by an upgraded ‘evolved lift capability’ (far right) that can carry heavier payloads

A second launch will later send a crewed spacecraft into space, and the third mission, Artemis III, will put a man and woman on the south pole of the moon.

The program will lay the groundwork in NASA’s plans to send crewed missions to Mars in the 2030s.

NASA plans to land on the Moon’s south pole in order to exploit its water ice, discovered in 2009, both for life support purposes and to be split into hydrogen and oxygen for use as rocket propellant.

But development of the SLS has been hit by delays and cost overruns — its first flight was set to take place in November 2018, and its price tag has risen from $6.2 billion to $8 billion, according to a June audit report.

NASA will have spent around $34 billion on the SLS, Orion, and Exploration Ground Systems Program programs through 2019 — a sum projected to increase to over $50 billion by 2024.

The future of the mission rests on continued political support, both from the White House and Congress, which is ultimately responsible for budget allocations.

WHAT IS NASA’S SPACE LAUNCH SYSTEM?

Nasa’s Space Launch System, or SLS, is an advanced launch vehicle that will ‘provide the foundation for human exploration beyond Earth’s orbit’, according to the space agency.

Launching with unprecedented thrust power, SLS will carry crews of up to four astronauts in the agency’s Orion spacecraft on missions to explore deep-space destinations.

Offering more payload mass, volume capability and energy to speed missions through space than any current launch vehicle, SLS is designed to evolve over several decades to keep up with modern technologies and payloads. 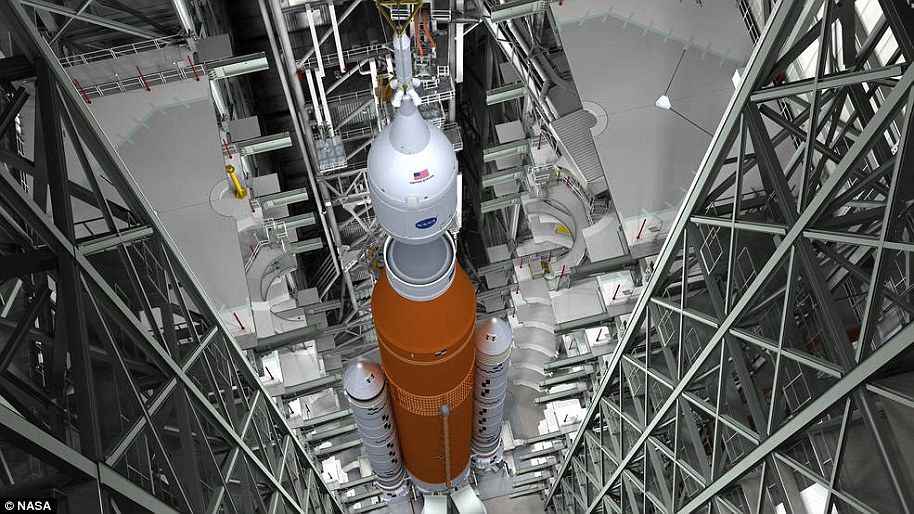 Nasa’s Space Launch System, or SLS, is an advanced launch vehicle that will ‘provide the foundation for human exploration beyond Earth’s orbit’, according to the space agency (artist’s impression)

These include robotic scientific missions to places like the Moon, Mars, Saturn and Jupiter.

The rocket’s first launch, which will be unmanned, is set for 2020 at Nasa’s Kennedy Space Centre in Florida.

Nasa intends to send humans to ‘deep-space’ destinations such as Mars and the moon aboard the SLS, with a date for a mission to the red planet set for the 2030s.