NASA has shared a remarkable image of the moon’s shadow hovering over the Arctic during last month’s solar eclipse that makes the celestial satellite look like a smudge on a page.

The image, released on Wednesday, was taken June 10 and shows an ‘epic’ view of the moon’s shadow during the solar eclipse, which was witnessed by millions around the world.

WHEN IS THE NEXT TOTAL SOLAR ECLIPSE?

The next US solar eclipse will take place on April 8, 2024, passing from Texas to Maine.

The next total solar eclipse after that is on August 12, 2026, and will be seen from the Arctic, Greenland, Iceland, Spain and Northeastern Portugal.

On September 2, 2035, China, northern Japan and Korea will witness a total solar eclipse.

Between 2023 and 2038, the greatest number of total solar eclipses will take place in Australia.

There will be five solar eclipses visible from the continent between April 20th, 2023 and December 26th, 2038.

The next total solar eclipse visible in the UK isn’t until 2093.

‘Taking images of the sunlit half of Earth from a distance four times further than the Moon’s orbit never ceases to provide surprises, like occasionally the Moon getting in our field of view, or the Moon casting shadow on Earth,’ said Dr. Adam Szabo, the NASA Project Scientist of DSCOVR in a statement.

This satellite is orbiting the L1 Lagrange point, which NASA defines as ‘positions in space where objects sent there tend to stay put’ and is nearly 1 million miles away from Earth.

The L1 Lagrange point is considered unstable on a scale of approximately 23 days, as satellites orbiting this position will undergo regular course and attitude corrections.

Nonetheless, it ‘affords an uninterrupted view of the sun and is currently home to the Solar and Heliospheric Observatory Satellite SOHO,’ NASA added.

EPIC’s pictures have been used to monitor Earth’s vegetation, cloud height and the ozone, as well as the occasional solar eclipse.

In June, skygazers in the UK and US were treated to a stunning partial solar eclipse which made the sun appear as a crescent in the morning sky.

During the event, about 30 percent of the sun was blocked out in Scotland, 20 percent in southern England and as much as 70 percent over eastern US states.

British and Irish observers saw a crescent sun instead of a ring, and in the US, viewers witnessed a partial eclipse at sunrise, another rare phenomenon.

Meanwhile, a rare type of solar eclipse that created a ‘ring of fire’ cast a dramatic shadow over Russia and Canada. 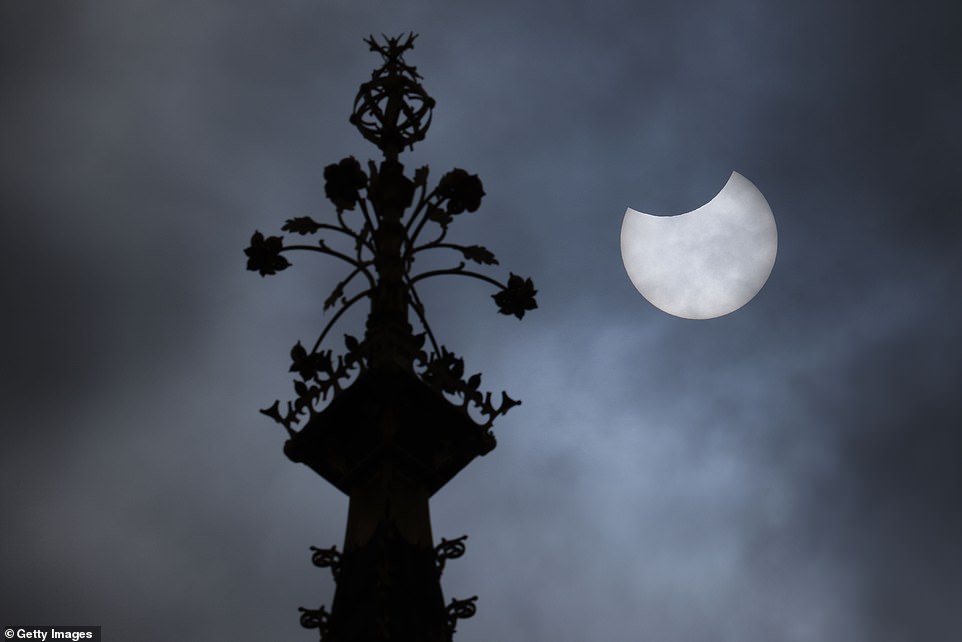 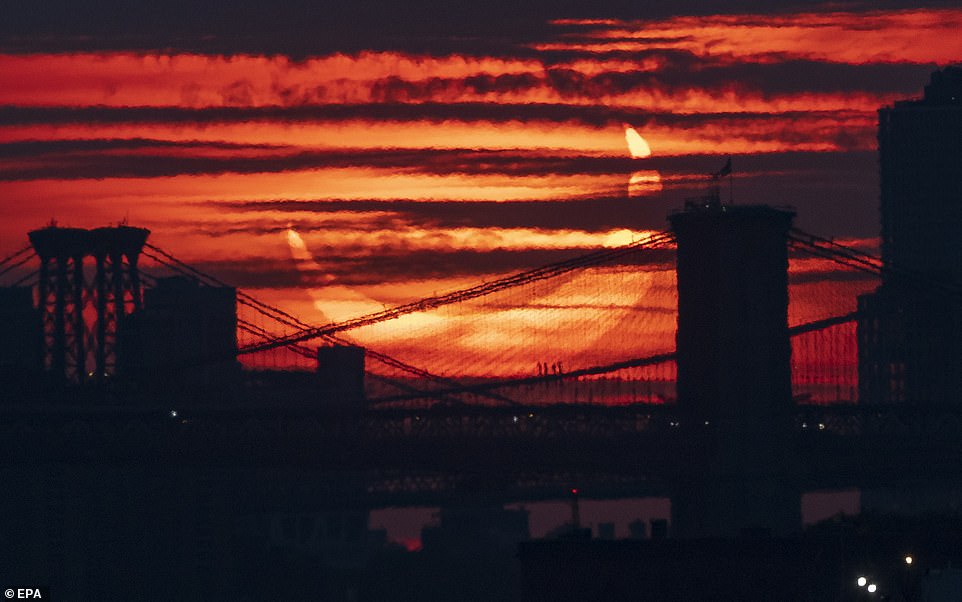 Pictured: the partial solar eclipse rises into an orange-tinged sky behind the Brooklyn Bridge and the east river in Manhattan, as seen from Bayonne, New Jersey on June 10, 2021

The ‘ring of fire’ solar eclipse occurs when the Moon is at its furthest from Earth and is therefore too far away to completely cover the sun, leaving a ring of light.

The ring of fire was best viewed from Qaanaaq, a town in Northwest Greenland, but was also visible across much of Canada and Russia.

What is an annular eclipse and how does the stunning display happen?

Diagram of an annular eclipse

The spectacular eclipse is when a ‘burning ring’ appears in the Earth’s sky.

It happens when the Earth, Sun and Moon align as the Moon is at the furthest point away from Earth in its orbit.

This means it is unable to fully obscure the Sun, causing a ‘burning ring’ to appear in the sky.

This is shown in part B of the diagram on the left.

The fascinating light display happens every six months or so, but has not been visible from the UK since 2003.

The next time Britons will be able to see it will be on 10 June 2021, when it will be visible across the whole country.