NASA is just hours away from launching a spacecraft that will deliberately smash into an asteroid, in a first-of-its-kind mission to see if this defense could stop a giant space rock from wiping out life on Earth.

Double Asteroid Redirection Test (DART), a box-shaped space probe, is patiently waiting atop a SpaceX Falcon 9 rocket at Vandenberg Space Force Base in California, where it will soar into space at 1:20am ET.

NASA plans to host a livestream of the launch on its channel starting at 12:30 ET on Wednesday.

‘All systems and weather are looking good for tonight’s Falcon 9 launch of @NASA’s DART into an asteroid-intercepting interplanetary trajectory,’ Elon Musk’s SpaceX shared on Twitter today.

DART is a 1,344-pound craft that will spend the next 10 months traveling to a small asteroid Dimorphos, located 6.8 million miles from Earth, at 13,500 miles per hour – it will meet the target in October 2022.

The idea of the mission is to see if a giant spacecraft to push a asteroid off its trajectory toward Earth and if all goes as planned, this will be NASA’s weapon of choice in a real world event.

DART ‘is something of a replay of Bruce Willis’s movie, ‘Armageddon,’ although that was totally fictional,’ Bill Nelson, NASA’s administrator, said in an interview.

In this image released by NASA, the SpaceX Falcon 9 rocket with the Double Asteroid Redirection Test, or DART, spacecraft onboard, is seen during sunrise, November 23, 2021

NASA emphasizes that the asteroids in question pose no threat to our home planet, but were chosen because they can be observed from ground-based telescopes here on Earth.

‘This could be the existence of the Earth, Nelson said in a Wednesday interview.  ‘If we have the capability on an inbound asteroid that could threaten our existence, as did an asteroid back in the time of the dinosaurs that hit in what is now the Yucatan Peninsula and wiped out the dinosaurs.

‘So we definitely have a personal interest in being able to ram an asteroid at high velocity.

‘That in the future we saw an inbound asteroid on the trajectory to Earth, we could send a probe out there, ram it and very slightly alter its trajectory so that it missed Earth by the time it got here.’ 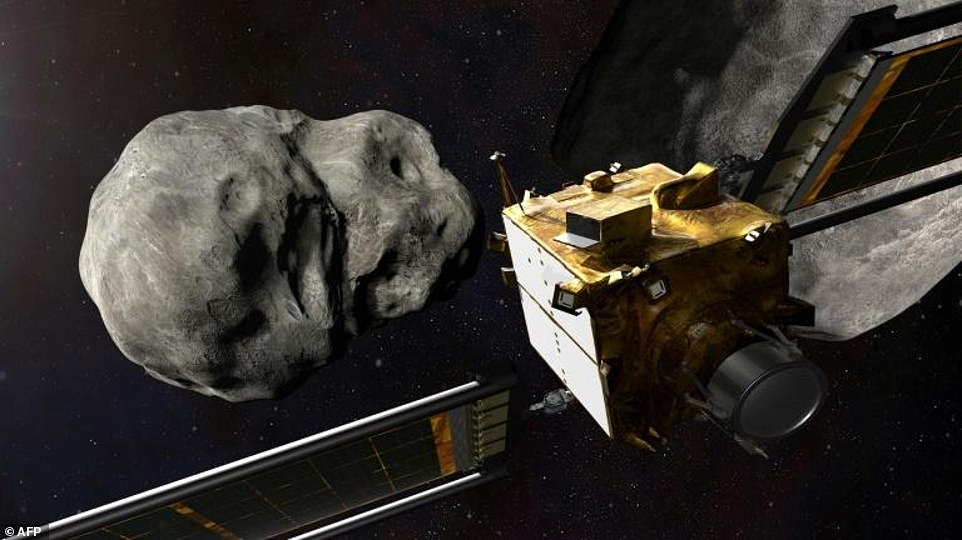 This artist’s illustration obtained from NASA on November 4, 2021 shows the DART spacecraft from behind prior to impact at the Didymos binary system. In the 1998 Hollywood blockbuster ‘Armageddon,’ Bruce Willis and Ben Affleck race to save the Earth from being pulverized by an asteroid

Dimorphos measures about 525 feet, the size of two Statues of Liberty, and is circling a much larger asteroid called Didymos, which is 2,500 feet in diameter- the pair are orbiting a distant sun. 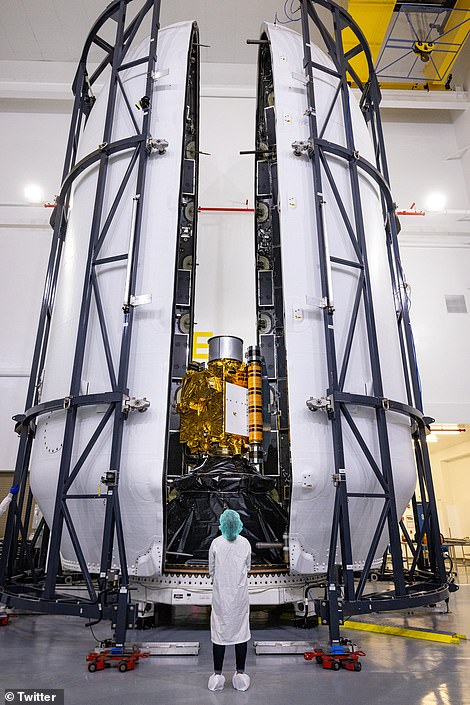 DART is a 1,344-pound craft that will spend the next 10 months traveling to a small asteroid Dimorphos

When DART collides with Dimorphos, the plan is to change the speed of the asteroid by a fraction of a percent, but the space rock should not be destroyed in the process.

Nancy Chabot of the Johns Hopkins Applied Physics Laboratory, which built DART, said in a statement: ‘It’s just going to give it a small nudge.

‘It’s only going to be a change of about 1 percent in that orbital period, so what was 11 hours and 55 minutes before might be like 11 hours and 45 minutes.’

Andy Rivkin, DART investigation team lead, said that the current orbital period is 11 hours and 55 minutes, and the team expects the kick will shave around 10 minutes off Dimorphos’ orbit.

NASA will then collect data on how much the asteroid’s orbit was altered following impact.

The trajectory of Didymos could also be slightly affected, but it would not significantly alter its course or unintentionally imperil Earth, scientists say.

As DART speeds toward Dimporphos, NASA scientists will turn their telescope lenses toward the crash site to see if the mission was a success.

The two asteroids will appear as tiny dots of reflected sunlight against the black backdrop of space and NASA will track the time between the pair of flickering lights.

One light indicates Dimorphos has passed in front of Didymos  and another, which specifies that Dimorphos orbited behind its parent asteroid. 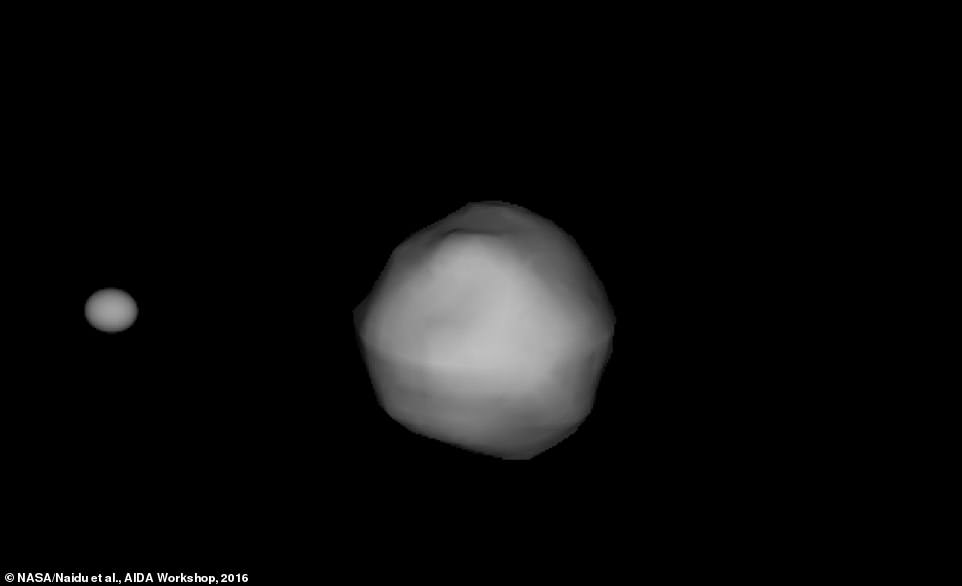 Dimorphos measures about 525 feet, the size of two Statues of Liberty, and is circling a much larger asteroid called Didymos, which is 2,500 feet in diameter- the pair are orbiting a distant sun 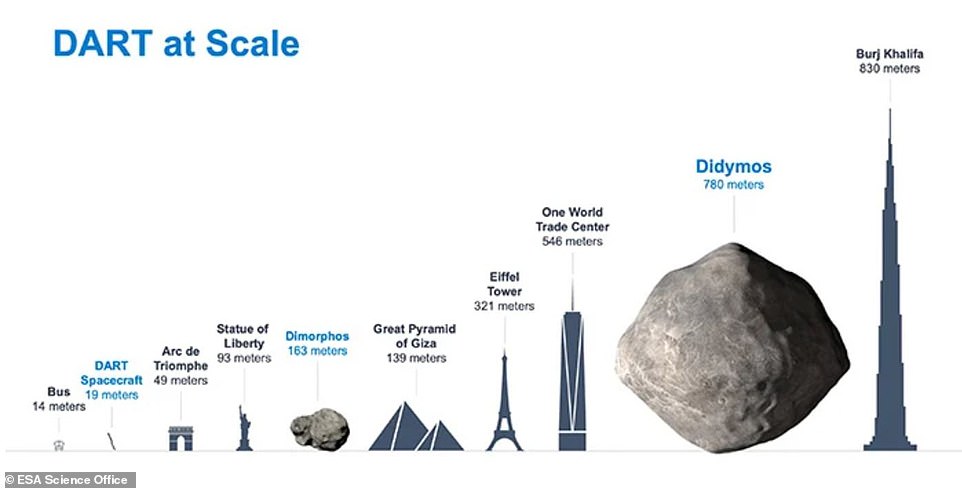 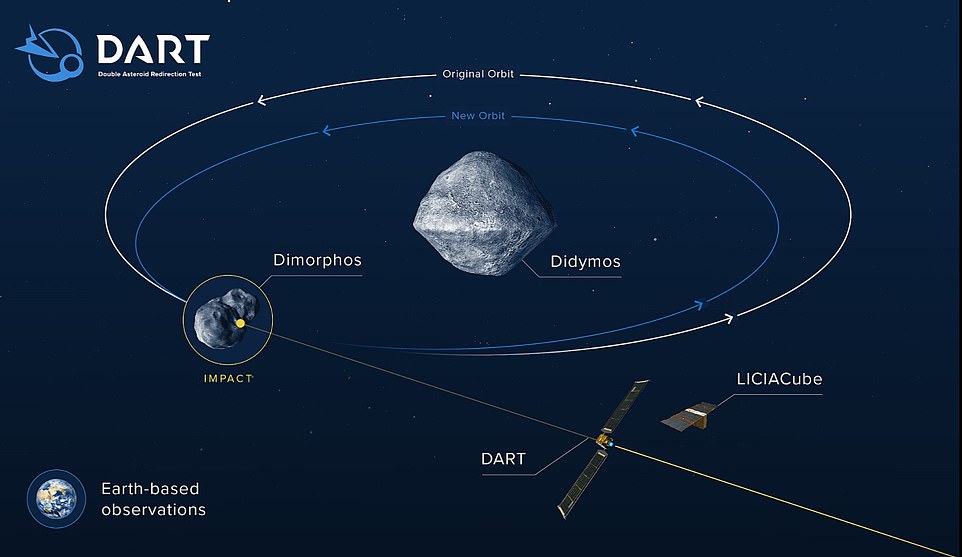 Nancy Chabot of the Johns Hopkins Applied Physics Laboratory, which built DART, said in a statement: ‘It’s just going to give it a small nudge. ‘It’s only going to be a change of about 1 percent in that orbital period, so what was 11 hours and 55 minutes before might be like 11 hours and 45 minutes’

If Dimorphos’s orbit around Didymos is extended by at least 73 seconds, DART will have successfully performed its mission.

NASA’s Planetary Defense Coordination Office is most interested in those larger than 460 feet in size, which have the potential to level entire cities or regions with many times the energy of average nuclear bombs.

There are 10,000 known near-Earth asteroids 460 feet in size or greater, but none has a significant chance to hit in the next 100 years.

One major caveat: only about 40 percent of those asteroids have been found to date.

After impact in October 2022, post-impact observations from Earth-based optical telescopes and planetary radars will measure the change in Dimorphos’ orbit around Didymos, according to NASA.

DART (pictured) is the first part of NASA’s asteroid defense strategy, designed in collaboration with the European Space Agency to protect Earth from a possible impact from a ‘hazardous asteroid’

The space agency provided details of the DART mission, which carries a price tag of $330 million, in a briefing for reporters earlier this month.

Lindley Johnson, NASA’s Planetary Defense Officer, said in a statement: ‘Although there isn’t a currently known asteroid that’s on an impact course with the Earth, we do know that there is a large population of near-Earth asteroids out there.

‘The key to planetary defense is finding them well before they are an impact threat.

‘We don’t want to be in a situation where an asteroid is headed towards Earth and then have to test this capability.’