NASA has tried to play down claims by Russian space officials an ISS leak was sabotage.

Speaking on Monday, Dmitry Rogozin, the head of Russian space agency Roskosmos, said that an official investigative report had confirmed their theory.

‘It concluded that a manufacturing defect had been ruled out which is important to establish the truth,’ he said.

Rogozin said the commission’s main line of inquiry was that the hole had been drilled deliberately, a position that has been voiced in the past.

‘Where it was made will be established by a second commission, which is at work now,’ he said.

Officials are hoping that secondary investigation will identify the people or persons responsible.

However, NASA today issued its own statement playing down the sabotage claims.

‘This conclusion does not necessarily mean the hole was created intentionally or with mal-intent. NASA and Roscosmos are both investigating the incident to determine the cause. ‘ 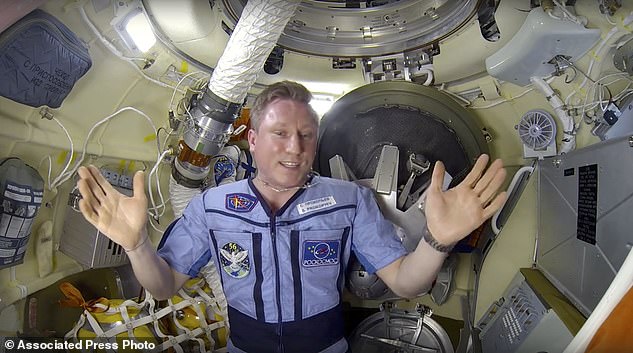 On October 11, American Astronaut Nick Hague and Russian Cosmonaut Alexey Ovchinin will launch to the International Space Station on a Russian Soyuz MS-10 spacecraft from the Baikonur Cosmodrome in Kazakhstan.

Administrator Bridenstine is scheduled to attend the launch and plans to meet with Mr. Rogozin.

This will be their first in-person meeting. They had a telephone call on September 12 during which they discussed the International Space Station leak.

The small hole in the wall of a Russian-made Soyuz capsule docked onto the ISS was located on August On Aug. 29th and quickly sealed up.

Officials suggested a number of possible reasons for the appearance of the hole.

Initially, it was thought the damage could have been caused by a micrometeorite piercing the spacecraft.

An anonymous source said the hole was drilled by a worker who hid their mistake with a seal instead of reporting it. 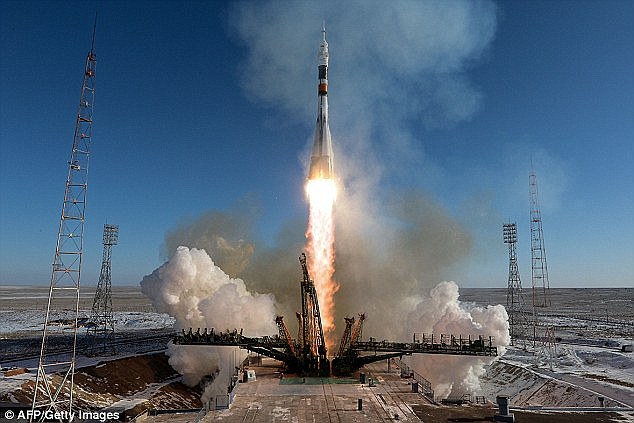 The Russian media speculated that a US astronaut might have sabotaged the spacecraft to delay a possible early return to earth due to alleged sickness of one member of the ISS crew.

The men later released a joint statement which said: ‘The Administrator and the General Director noted speculations circulating in the media regarding the possible cause of the incident and agreed on deferring any preliminary conclusions and providing any explanations until the final investigation has been completed.

A tiny hole appeared in a Russian space capsule locked to the ISS on 29 August.

Space agency chief Dmitry Rogozin said on September 4 the hole was caused by a drill and could have been made with a ‘wavering hand’.

‘They affirmed the necessity of further close interaction between NASA and Roscosmos technical teams in identifying and eliminating the cause of the leak, as well as continuation of normal ISS operations and NASA’s ongoing support of the Roscosmos-led Soyuz investigation.

‘They acknowledged the entire crew is dedicated to the safe operation of the station and all docked spacecraft to ensure mission success.

‘The Administrator and the Roscosmos General Director agreed to conduct their first face-to-face meeting at the Baikonur Cosmodrome on or about October 10 when the NASA Administrator will visit Russia and Kazakhstan in conjunction with the upcoming Soyuz crew spacecraft launch of American astronaut Nick Hague and Russian cosmonaut Alexy Ovchinin.’ 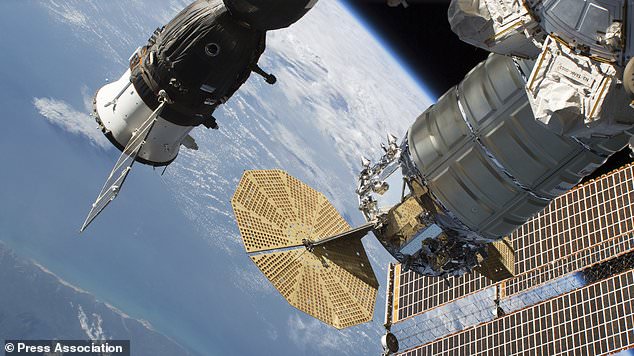 Previously, Rogozin – who once oversaw the space industry as deputy prime minister – admitted it had become difficult to work with NASA.

‘Problems with NASA have certainly appeared but not through the fault of NASA,’ he said, blaming unnamed American officials for telling the US space agency what to do.

He also claimed that SpaceX founder Elon Musk sought to squeeze Russia out of the space launch services market and complained about the US military drone X-37.

‘Americans have this thing, the X-37,’ Rogozin said. ‘We don’t understand its purposes. Rather, we do understand, but we have not received an official explanation.

‘Essentially, this thing can be used as a weapons carrier.’