It was the year that NASA sent four spacecraft to land on Venus in a pioneering exploration mission.

But 1978 was also the year engineers devised a makeup set for their top female astronauts containing mascara, lip gloss and blusher.

The US space agency has confounded Twitter users after sharing an archive image of the cosmetics kit alongside a quote from astronaut Sally Ride.

It read: ‘The engineers at NASA, in their infinite wisdom, decided that women astronauts would want makeup – so they designed a makeup kit.

‘You can just imagine the discussions amongst the predominantly male engineers about what should go in a makeup kit.’

Outcry: NASA has confounded Twitter users after sharing an archive image of the cosmetics kit (pictured) alongside a quote from astronaut Sally Ride

The image has clocked up thousands of likes, comments and re-tweets with many Twitter users stunned that NASA engineers had apparently prioritised makeup when cargo weight was at a premium.

A recent study by the Kennedy Space Center suggested it cost the equivalent of it cost $272,000 (£196,600) in today’s money per kilogram for the Space Shuttle to carry cargo to the International Space Station.

Taking to Twitter, Violet Byrne wrote: ‘It cost how much per ounce to send something up in the shuttle and they prioritized makeup?’

Lisa Fenwick added: ‘Unthinkable to orbit the earth without makeup,’ while others were convinced the picture must have been a ‘joke’.

Viral: The image has clocked up thousands of likes, comments and re-tweets with many Twitter users stunned that NASA engineers had apparently prioritised makeup

One quipped: ‘I can imagine how funny it would be to hear engineer men discuss makeup,’ with a fellow Twitter user observing it was ‘funny and sad at the same time’.

Others pointed out that the case, also containing makeup remover and lipstick, was a prototype and never made it into space – although personal hygiene kits containing essentials such as deodorant and toothpaste have been used on spaceflight as far back as the 1960s.

Ride, who became the first woman to go into space in 1983, later revealed in an interview that she was once asked whether 100 tampons would be ‘the right number’ for a week-long mission in space. 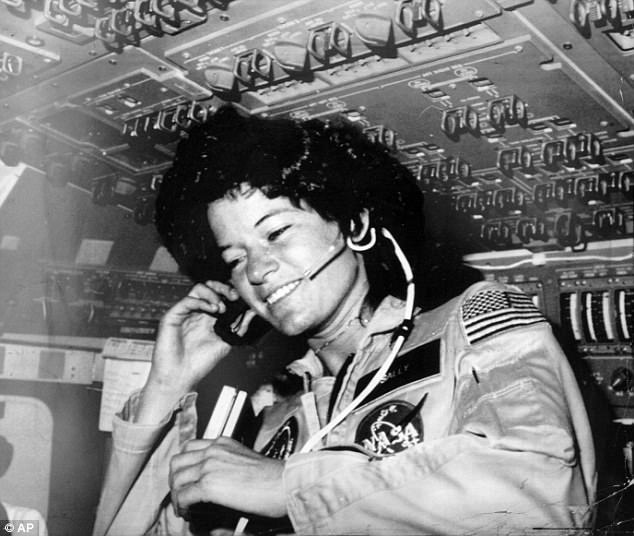 Trailblazer: Sally Ride, whose comments about the makeup kit have gone viral this week, became the first American woman in space in 1983. She died in 2012

Retired astronaut Rhea Seddon has also revealed in a recent blog post that she and fellow women astronauts were once asked whether they wanted makeup on board.

She wrote: ‘If there would be pictures taken of me from space, I didn’t want to fade into the background so I requested some basic items.

‘All agreed that a small kit with items of our choosing would be a “preference item,” that is, stowed only if requested.’

In January 2016 NASA announced that, for the first time in its history, its latest cohort of astronauts was 50 per cent female.