NASA’s asteroid-chasing spacecraft is swinging by Earth today on its way to a space rock.

Launched a year ago, Osiris-Rex was on track to pass within about 11,000 miles (17,700 kilometers) of the home planet Friday afternoon – above Antarctica.

Those with telescopes were advised to eyes set on the sky at 5.52 pm BST (12.52pm ET) in order to have a chance of seeing the vessel before it departs.

It needs Earth’s gravity as a slingshot to put it on a path toward the asteroid Bennu.

NASA’s asteroid-chasing spacecraft is swinging by Earth on Friday on its way to a space rock. Launched a year ago, Osiris-Rex was on track to pass within about 11,000 miles (17,700 kilometers) of the home planet Friday afternoon – above Antarctica

HOW TO SEE IT

Stargazers in both the north and south hemispheres had a chance to see REx.

Those with telescopes were advised to eyes set on the sky at 5.52 pm BST (12.52pm ET) in order to be in with a chance of seeing the vessel before it departs.

The spacecraft is set to appear within the constellations of Cetus and Pisces for most observers.

However, everyone looking to say goodbye to Rex is encouraged to use Nasa’s Horizon database to calculate exactly where your telescope should be facing.

Osiris-Rex should reach the small, roundish asteroid next year and, in 2020, collect some of its gravel for return to Earth.

If all goes well, scientists should get the samples in 2023.

Friday’s flyby is a quick hello: The spacecraft will zoom by at about 19,000 mph (31,000 kph). NASA has taken precautions to ensure Osiris-Rex – about the size of an SUV – does not slam into any satellites.

‘Everything looks great! Thanks for the well wishes,’ the University of Arizona’s Dante Lauretta, chief scientist for Osiris-Rex, said late Thursday via Twitter.

Ground telescopes have been trying to observe the spacecraft while it’s in the neighborhood.

NASA expected to be out of contact with Osiris-Rex for about an hour during the flyby.

Nasa’s Osiris-Rex spacecraft will be visible from earth before it propels itself towards an asteroid. Rex will get as close as 11,000 miles (18,000 km) above Earth’s surface in order to generate enough gravitational force to slingshot itself in the direction of Bennu

HOW WILL THE MISSION WORK?

The spacecraft launched on September 8 at 19:05 EST aboard an Atlas V rocket.

The spacecraft was going to be too close for the Deep Space Network for communication relay.

Three cameras on the spacecraft will point towards Bennu, giving Osiris-Rex a clear view from all distances.

PolyCam is a high-resolution camera that will acquire the first images of Bennu and perform an initial mapping of the asteroid.

MapCam is a medium-resolution camera that will map the asteroid in colour and search for satellites and dust plumes.

SamCam will document the sampling process.

The spacecraft will store the images captured by Ocams and send them to the Osiris-Rex team every few days.

Bennu is just 1,640 feet (500 meters) or so across and circles the sun in an orbit slightly wider than ours.

Osiris-Rex will go into orbit around the asteroid and seek the best spot for grabbing a few handfuls of the bite-size bits of rock.

It will hover like a hummingbird as a mechanical arm briefly rests on the surface and sucks in samples stirred up by nitrogen gas thrusters.

This is the first U.S. attempt to bring back samples from an asteroid.

Japan already has visited an asteroid and returned some specks. 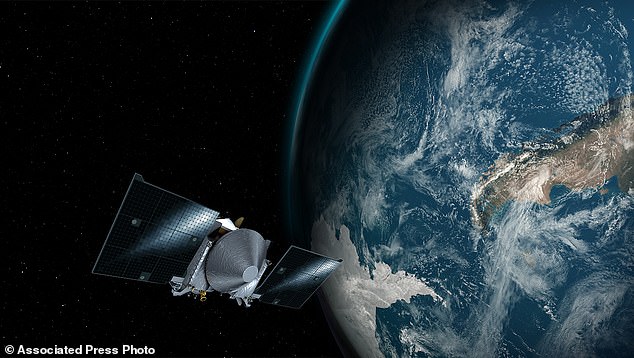 Osiris-Rex should reach the small, roundish asteroid next year and, in 2020, collect some of its gravel for return to Earth. If all goes well, scientists should get the samples in 2023