NASA’s DART activates its camera to show the Dimorphos 6.8 million miles from Earth

NASA’s DART spacecraft has its sights set on the asteroid Dimorphos that appears like a bright dot in the blackness of space.

Double Asteroid Redirection Test (DART), a box-shaped space probe, activated its camera around 5:30pm ET to see its target and nearly an hour later, NASA announced the craft has locked the asteroid with its autonomous navigation system.

The craft is crashing into the asteroid at 15,000 miles per hour at 7:14pm ET in an attempt to knock the space rock from its orbit.

Such a mission may evoke memories of a Hollywood disaster movie such as Armageddon, but this is very much real and is actually part of the US space agency’s first ever planetary defense test.

The space probe will use what is called  kinetic impact, which involves sending one or more large, high-speed spacecraft into the path of an approaching near-earth object.

By striking Dimorphos head on, NASA hopes to push it into a smaller orbit, shaving 10 minutes off the time it takes to encircle Didymos, which is currently 11 hours and 55 minutes — a change that will be detected by ground telescopes in the days or weeks to come. 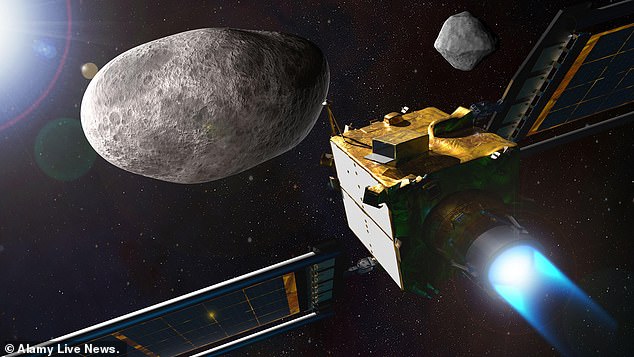 Double Asteroid Redirection Test (DART), a box-shaped space probe, has activated its camera that will capture it crashing into the asteroid at 15,000 miles per hour at 7:14pm ET in an attempt to knock the space rock from its orbit

Bill Nelson, NASA’s administrator, said in a November interview that DART ‘is something of a replay of Bruce Willis’s movie, ‘Armageddon,’ although that was totally fictional.’

As the craft propels itself autonomously for the mission’s final four hours like a self-guided missile, its imager will start to beam down the very first pictures of Dimorphos, before slamming into its surface.

Dimorphos completes an orbit around Didymos every 11 hours and 55 minutes. It was discovered in 1996 by the Spacewatch survey at Kitt Peak.

The asteroid is classified as both a potentially hazardous asteroid and a near-Earth object.

Orbiting Didymos is a ‘moonlet’ called Dimorphos, which was found in 2003.

‘What we’re looking for is loss of signal. And what we’re cheering for is a loss of the spacecraft,’ said Bobby Braun of Johns Hopkins Applied Physics Laboratory.

Minutes later, a toaster-sized satellite called LICIACube, which already separated from DART a few weeks ago, will make a close pass of the site to capture images of the collision and the ejecta — the pulverized rock thrown off by impact.

The craft launched last November and is nearly to the end of its epic journey to the small asteroid Dimorphos, 525-foot in diameter, which orbits a larger one called Didymos.

Didymos and Dimorphos are currently making their closest approach to Earth in years, passing at a distance of about 6.7 million miles from our planet.

An asteroid the size of Dimorphos could cause a continent-wide destruction on Earth, while the impact of one the size of the larger Didymos would be felt worldwide.

NASA emphasizes that the asteroids in question pose no threat to our home planet, but were chosen because they can be observed from ground-based telescopes here on Earth. 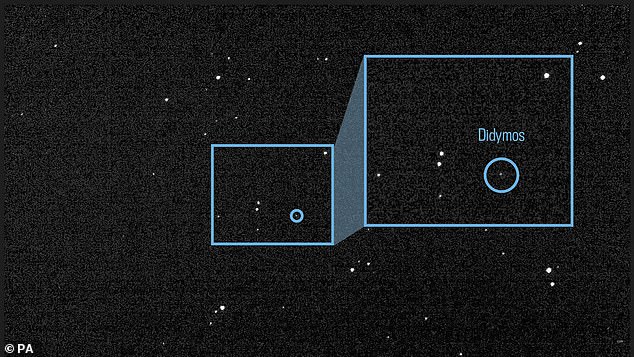 The Double Asteroid Redirection Test was launched last November ahead of a year-long journey to crash into the small asteroid Dimorphos, which orbits a larger one called Didymos

Telescopes will be watching and studying from afar, including NASA’s new $10 billion James Webb observatory, while DART will also return images to Earth at the rate of one per second as it heads towards its ‘deep impact’.

After the feed cuts out when the spacecraft explodes, a 30-pound Italian cubesat that was released by DART several days ago will record the aftermath and ensuing crater.

Dimorphos currently takes around 11 hours and 55 minutes to circle Didymos but the impact is expected to reduce this to about 11 hours and 45 minutes. Telescope measurements will confirm this in the weeks and months ahead.

The theory is that if an asteroid was on a collision course with Earth, you would only need to change its velocity by a small amount to alter its path so that it misses us, provided this was done far enough in advance.

NASA, however, knows that there is a possibility it could miss the asteroid.

Rome-based Virtual Telescope Project has also teamed up with several observatories in South Africa, and will be showing the target asteroid in real-time at the moment of the scheduled impact. 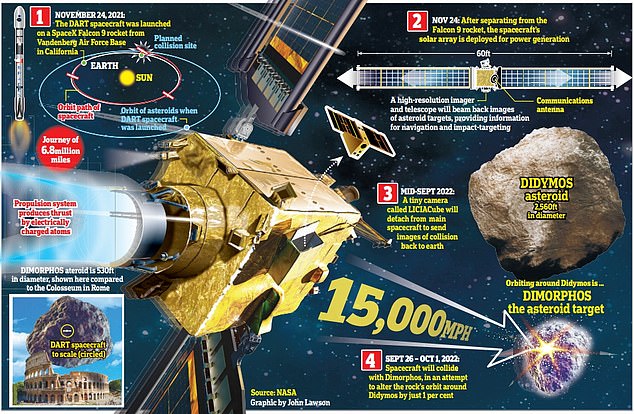 Brace for impact: NASA’s first ever ‘planetary defense’ spacecraft – sent to deflect an asteroid 6.8 million miles from Earth – is set to hit its target on Monday, September 26. The graphic above shows how the mission will work

Astronomers say that anybody tuning it to watch the impact may well be able to spot changes in brightness of the asteroid as a result of the collision.

Nancy Chabot of Johns Hopkins Applied Physics Laboratory, which is managing the project, said in a statement: ‘This isn’t going to destroy the asteroid. It’s just going to give it a small nudge.’

Dimorphos completes an orbit around Didymos every 11 hours and 55 minutes ‘just like clockwork’, she added.

DART’s goal is a crash that will slow Dimorphos down and cause it to fall closer toward the bigger asteroid, shaving 10 minutes off its orbit.

The change in the orbital period will be measured by telescopes on Earth. The minimum change for the mission to be considered a success is 73 seconds.

The DART technique could prove useful for altering the course of an asteroid years or decades before it bears down on Earth with the potential for catastrophe.

NASA considers any near-Earth object ‘potentially hazardous’ if it comes within 0.05 astronomical units (4.6 million miles) and measures more than 460ft in diameter.

More than 27,000 near-Earth asteroids have been cataloged but none currently pose a danger to our planet.