The 4-pound helicopter, which arrived on Mars in February in conjunction with the Perseverance rover, flew 525 feet (160meters) for 77.4 seconds.

It landed roughly 440 feet (133.5m) away from Perseverance and managed to take another image of its own shadow, 14 days after its seventh flight.

The 4-pound helicopter, which arrived on Mars in February in conjunction with the Perseverance rover, flew 525 feet (160meters) for 77.4 seconds

Both Ingenuity’s seventh and eighth flights went off without a hitch, but its sixth flight took some ‘unexpected motions,’ the US space agency said previously.

The unwanted turns were due to an ‘image processing issue,’ but NASA said  at the time the helicopter ‘landed safely and is ready to fly again.’

The helicopter first deployed from Perseverance on April 3, starting a 30-day clock to make its first powered flight.

Ingenuity, which is just 18-inches tall, made its first flight on April 19, 2021, making history as the first powered controlled flight on another planet.

Since then it has completed eight successful flights, the first five as part of a ‘technical demonstration’ to prove something could fly on Mars.

The subsequent flights are part of an extended mission support role, helping Perseverance.

NASA has not yet said when Ingenuity will make its ninth flight, but given its history, it can be expected to happen sometime within the next few weeks.

While airborne, Ingenuity keeps track of its motion using an onboard inertial measurement unit (IMU) – that tracks acceleration and rotation rates.

By integrating this information over time, it is possible to estimate where it is, how fast it is moving, and how it is oriented in space.

The onboard control system reacts to the estimated motions by adjusting control inputs rapidly – at a rate of 500 times per second.

The $2.7 billion Perseverance is currently heading south from its landing spot on the Jezero Crater, where it landed 125 sols (Martian days) ago, on February 18.

So far, it has driven 0.32 miles within the crater, NASA said, where it is performing a number of tasks, including searching for evidence of ancient life. 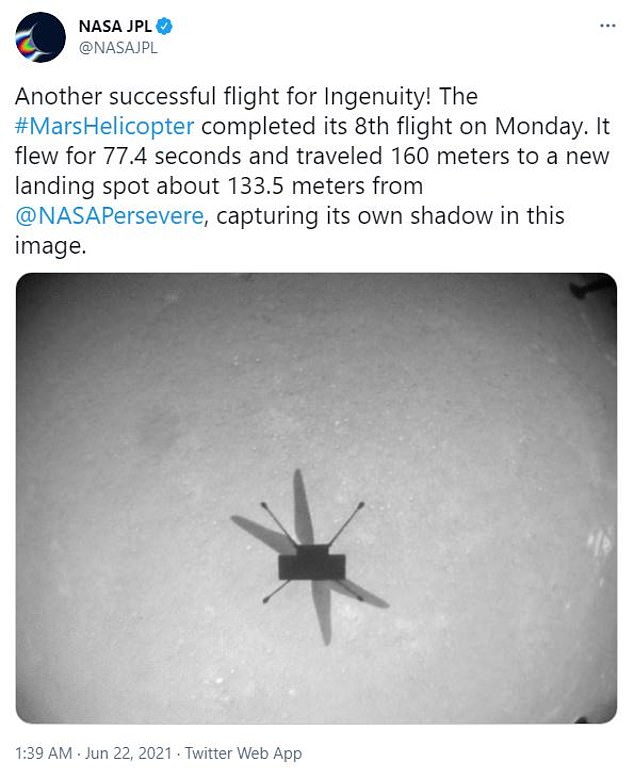 It landed roughly 440 feet (133.5m) away from Perseverance and managed to capture its own shadow, 14 days after its seventh flight

Despite encountering an anomaly on its sixth flight, NASA’s Ingenuity helicopter has successfully completed its seventh and eighth flights