NASA has unfolded the giant mirror of its James Webb Space Telescope ‘like a piece of origami artwork’ one last time ahead of its launch to space in October.

The orbiting observatory has been designed as a successor to the highly successful Hubble space telescope and can see from the near ultraviolet to the near infrared.

The US-space agency confirmed that for the last time while it is on Earth, the world’s largest and most powerful space telescope opened its iconic primary mirror.

It has to be folded ‘like a piece of origami artwork’ to fit within the rocket fairing that will take it out of Earth’s atmosphere and send it a million miles to its final orbit.

Supported by NASA, the European Space Agency (ESA) and the Canadian Space Agency (CSA), it has a massive 21ft 4 inch mirror that was commanded to fully expand and lock itself into place, replicating the process that will happen in space.

This event marked a key milestone in preparing the observatory for launch on an Ariane 5 rocket from the ELA-3 launch site in Kourou, French Guiana in October.

NASA’s James Webb Space Telescope is undergoing tests at Northrop Grumman in Redondo Beach, California. The world’s largest and most powerful space telescope ever built unfolded its giant golden mirror for the last time on Earth

NIRSpec (Near InfraRed Spectrograph) will also perform spectroscopy over the same wavelength range.

MIRI (Mid-InfraRed Instrument) will measure the mid-to-long-infrared wavelength range from 5 to 27 micrometers.

FGS/NIRISS (Fine Guidance Sensor and Near Infrared Imager and Slitless Spectrograph), is used to stabilise the line-of-sight of the observatory during science observations.

The latest unfolding is part of the final run of tests before the mirror is deployed to its final orbit, at a stable point between the Sun and the Earth.

The conclusion of this latest test represents the team’s final checkpoint in a long series of tests.

They have been designed to ensure Webb’s 18 hexagonal mirrors are prepared for a long journey in space, and a life of discovery.

All of the telescope’s many movable parts have now confirmed they will perform as expects when exposed to conditions expected during the launch.

‘The lightweight mirrors, coatings, actuators and mechanisms, electronics and thermal blankets when fully deployed form a single precise mirror that is truly remarkable,’ he added.

‘This is not just the final deployment test sequence that the team has pulled off to prepare Webb for a life in space, but it means when we finish, that the primary mirror will be locked in place for launch.

‘It’s humbling to think about the hundreds of dedicated people across the entire country who worked so hard to design and build the primary mirror, and now to know launch is so close.’ 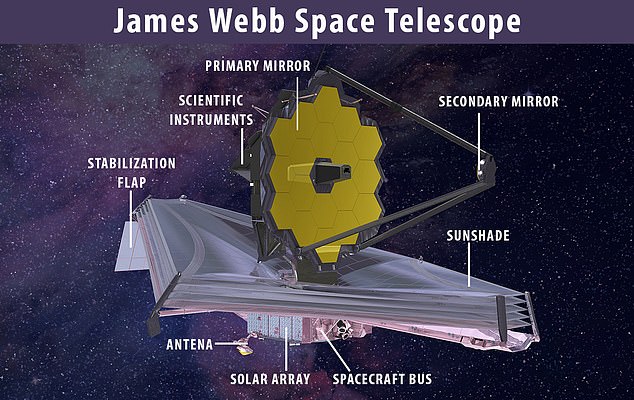 Making the testing conditions close to what the telescope will experience in space helps to ensure the observatory is fully prepared for its science mission.

When in orbit between the Earth and the Sun it will be about one million miles away from Earth, significantly further than the 340 miles Hubble is from the planet.

Commands to unlatch and deploy the side panels of the mirror were relayed from Webb’s testing control room at Northrop Grumman, in Redondo Beach, California. 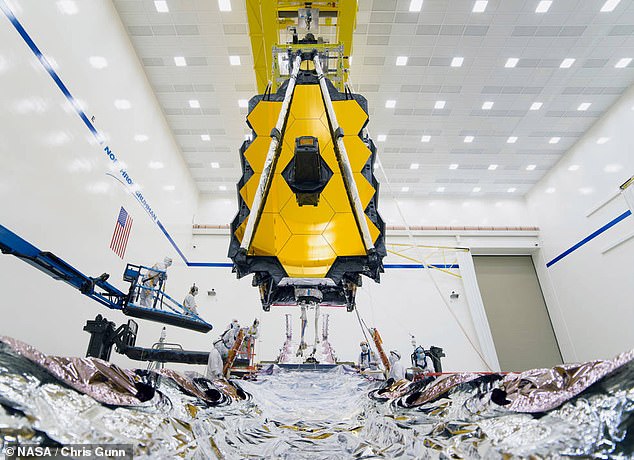 Scientists may find ALIENS by 2026 thanks to the Webb telescope

The existence of life on another planet could be proved as early as 2026 thanks to the James Webb telescope.

It has the ability to detect signatures made by living creatures and Ohio State researchers say it could find ‘life’ on another planet in under 60 hours.

Graduate student Caprice Phillips said the results of her study show that we may ‘realistically find signs of life in the next 5 to 10 years.’

Phillips calculated that when the James Webb Space Telescope launches in October, it could feasibly detect ammonia around gas dwarf planets after just a few orbits.

The software instructions sent, and the mechanisms that operated are the same as those used in space.

Special gravity offsetting equipment was attached to Webb to simulate the zero-gravity environment in which its complex mechanisms will operate.

All of the final thermal blanketing and shielding designed to protect its mirrors and instruments from interference were in place during testing.

To observe objects in the distant cosmos, and to do science that’s never been done before, Webb’s mirror needs to be so large that it cannot fit inside any rocket available in its fully extended form.

Like a piece of origami artwork, Webb contains many movable parts that have been specifically designed to fold themselves to a compact formation.

This formation is considerably smaller than when the observatory is fully deployed.

This allows it to just barely fit inside a 16-foot rocket fairing, with little room to spare.

To deploy, operate and bring its golden mirrors into focus requires 132 individual actuators and motors in addition to complex backend software to support it.

A proper deployment in space is critically important to the process of fine-tuning Webb’s individual mirrors into one functional and massive reflector, NASA explained. 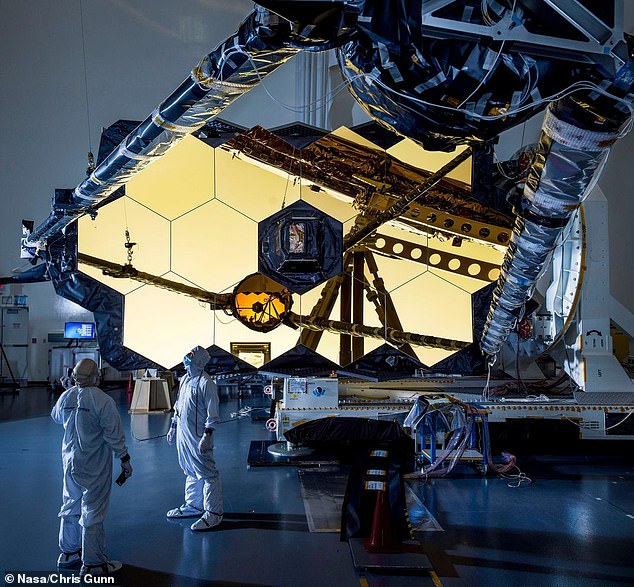 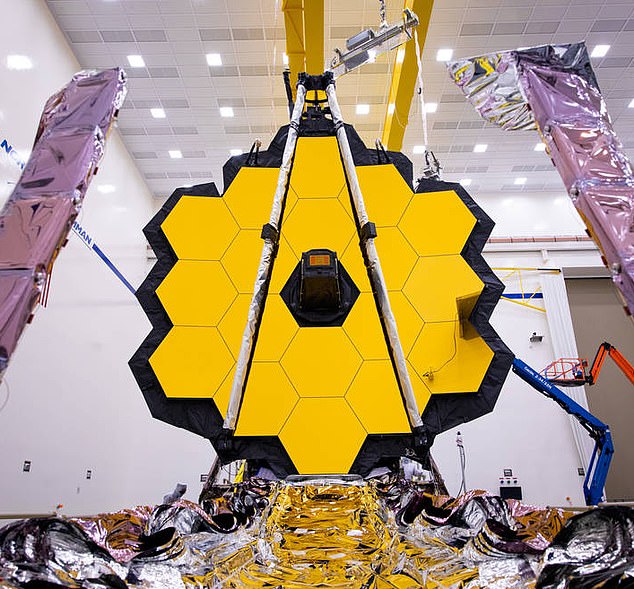 Before planets around other stars were first discovered in the 1990s, these far-flung exotic worlds lived only in the imagination of science fiction writers.

But even their creative minds could not have conceived of the variety of worlds astronomers have uncovered.

Many of these worlds, called exoplanets, are vastly different from our solar system’s family of planets.

Seeing these distant worlds isn’t easy because they get lost in the glare of their host stars.

Webb is equipped with special optical systems which use masks to block out as much starlight as possible.

This will allow them to study faint exoplanets and to uncover new worlds.

Once the wings are fully extended and in place, extremely precise actuators on the backside of the mirrors position and bend or flex each mirror into a specific prescription.

Testing of each actuator and their expected movements was completed in a final functional test earlier this year.

‘Pioneering space observatories like Webb only come to fruition when dedicated individuals work together to surmount the challenge of building something that has never been done before,’ said Ritva Keski-Kuha, deputy optical telescope element manager for Webb at Goddard.

‘I am especially proud of our teams that built Webb’s mirrors, and the complex back-end electronics and software that will empower it to see deep into space with extreme precision.

‘It has been very interesting, and extremely rewarding to see it all come together.

‘The completion of this last test on its mirrors is especially exciting because of how close we are to launch later this year.’

These include extending and then restowing two radiator assemblies that help the observatory cool down, and one full extension and restowing of its deployable tower.

The James Webb Space Telescope will be the world’s premier space science observatory when it launches in 2021.

Webb will solve mysteries in our solar system, look beyond to distant worlds around other stars, and probe the mysterious structures and origins of our universe and our place in it.