NASA’s long-delayed James Webb telescope has a 12 percent chance of actually launching on time, says new study from the US government

A Government Accountability Office report is casting serious doubt on whether NASA will be able to meet a launch date for its long-delayed space telescope.

In its report, first highlighted by Ars Technica, the agency says that technical problems with the telescope’s primary contractor, Northrop Grumman, give it a 12 percent chance of meeting its slated launch of March 2021.

More likely, according to the GAO, is that the telescope will launch about six months later in July 2021.

Named after the second administrator of NASA, the replacement flagship telescope (pictured) has also run well over its enormous $8 billion budget

Among the issues, according to Ars Technica, are critical components of  the instrument’s construction like the bolts used by Northrop Grumman.

Ars Technica notes that some of them did not meet strength requirements and would need to be replaced.

Other issues included problems with flaps meant to stabilize the observatory and misfiring actuators that could lead to a complete failure of the telescope’s mission objectives.

For those who have been following the protracted saga of NASA’s James Webb telescope – a next-generation space telescope that promises to provide unprecedented insight into the reaches of our universe – news of another delay will likely not come as a surprise.

The instrument, billed as a successor to NASA’s Hubble Telescope, has been in development for more than a decade and has until recently alluded firm launch dates.

‘Now estimated to cost $9.7 billion, the project’s costs have increased by 95 percent and its launch date has been delayed by over 6.5 years since its cost and schedule baselines were established in 2009,’ wrote the GAO. 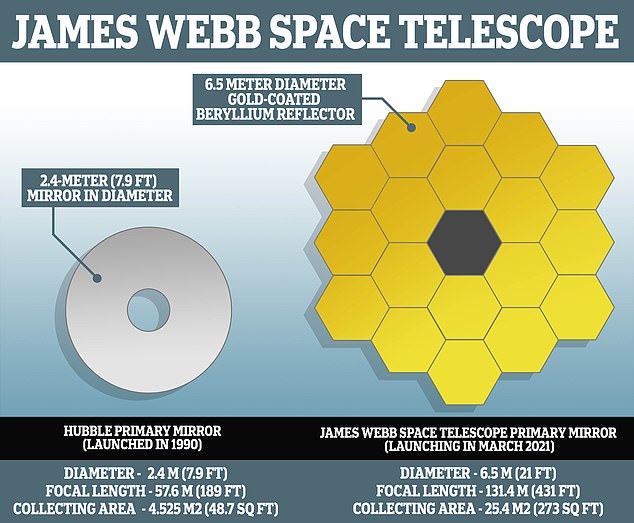 In August last year, NASA announced that it had successfully assembled the craft, marking the biggest milestone of its long road to completion.

Once completed, the telescope will be used to look back to the first galaxies born in the early universe more than 13.5 billion years ago, and observe the sources of stars, exoplanets, and even the moons and planets of our solar system.

It will use the most advanced technologies to make observations including infrared light that will be able to suss out details of planets and moons within our solar system most distant galaxies.