Astronauts on the International Space Station (ISS) are preparing to take one small bite for man, but one giant bite for cookie-kind when they bake cookies for the first time ever in outer space.

Food isn’t typically cooked, per say, on the ISS, but rather rehydrated or reheated before consumption. But thanks to brand new technology — and some ready-to-go cookie dough — the space station will get its first-ever fresh baked goods before 2019 comes to a close.

The exciting innovation isn’t just a treat for the men and women who get to eat the cookies, either: Former NASA astronaut Mike Massimino, 56, told DailyMail.com that it’s also sure to be a fascinating science experiment in how baking works differently in microgravity.

One small bite for man… Later this year, astronauts aboard the International Space Station will bake a cookie in space for the first time 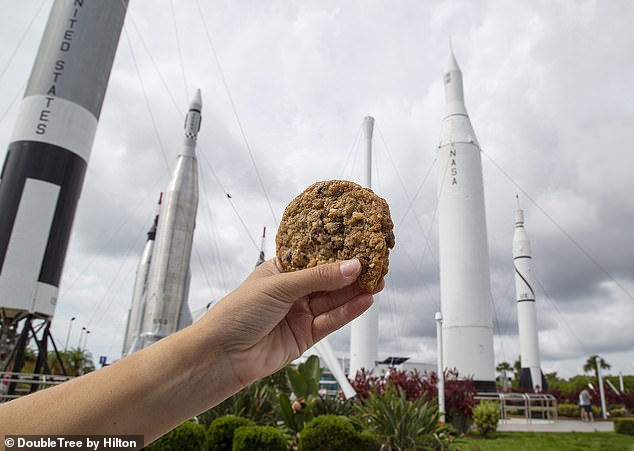 Just call it a rocket chip cookie! DoubleTree by Hilton is sending up the cookie dough, which will be baked in a specially-designed oven built by Zero G Kitchen

Before now, food in space has either been sent up dehydrated (and then rehydrated) or pre-cooked and shelf-stabilized — meaning astronauts could heat something up, but not make it fresh.

NASA’s Mike Massimino on how digestion changes in space

‘Your digestion’s a bit different in space,’ Massimino told Dailymail.com.

There’s a bit of motion sickness for the first day or so, he explained, and then it’s a matter of food moving through the body.

‘Gravity does help food get through our system. So that’s not gonna be working as well in zero gravity,’ he said.

‘My first flight we were encouraged to eat dry fruit and stuff that would help you go.

‘My second flight, we were working closely with the Russians at that point, and they would use supplements like Metamucil. So we’d start taking that stuff ahead of time and get on a regular cycle. And that helps.’

That’s all changing with a special oven that has been built by husband and wife team, Ian and Jordana Fichtenbaum, of Zero G Kitchen. Their oven has been designed to bake a cookie in space, using dough provided by DoubleTree by Hilton, which is expected to be quite a different experience from cooking a sweet treat here on Earth.

For one, there is a natural air movement on the this planet that doesn’t exist in space and has to be recreated. And in microgravity, cookie dough is going float around the inside of an oven if it’s not held in place — so custom baking trays had to be built.

But now that obstacle has been figured out, astronauts will get to eat fresh-baked cookies in orbit for the first time in history — and Massimino says that’s a big deal.

‘A cookie is a reminder of home,’ the former NASA astronaut said at a launch event on Wednesday.

‘Food is more than just sustenance. It’s also a way to share time and experience with the people around you. And it also leads to a sense of high morale if you enjoy your food.’ 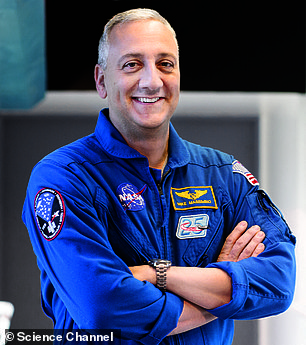 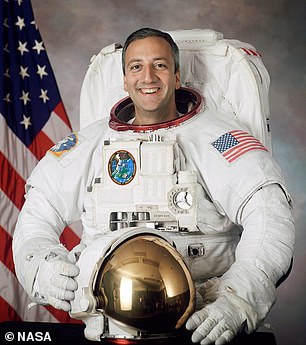 The expert: Former astronaut Mike Massimino, the first astronaut to tweet from space, spoke about the innovation with DailyMail.com 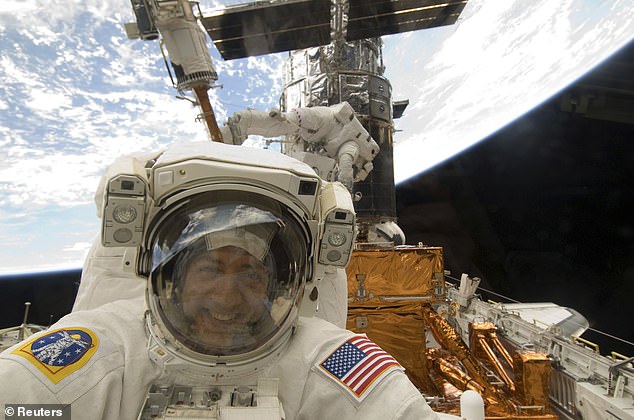 To infinity and beyond! Massimino went on two spaceflights, in 2002 and 2009 (pictured). In 2002 his crew set a record for spacewalk time, and in 2009 he sent the first tweet from space

Massimino insisted that space food isn’t actually all that bad — in fact, he said, he was one of only two astronauts he knows of to have gained weight in space.

His favorites were shrimp cocktail and macaroni and cheese, though he also liked Italian staples like lasagna, ravioli, and tortellini.

Giving dishes a kick — like with some extra Tabasco sauce — also helped with the flavor, since astronauts get a bit stuffy in space and that compromises their sense of smell and taste.

As for dessert, there was always candy like M&Ms and bite-size Milky Ways on board, as well as a stash of bite-size biscotti that Massimino brought himself.

‘We have pudding, we have chocolate fudge cake. And we can get like an apple cobbler. Mostly the stuff needs some kind of wetness,’ he told DailyMail.com.

But fresh-baked cookies on board will definitely be a game-changer.

‘I don’t know how many cookies are gonna be available up there but I think this is gonna be a special treat. It’s gonna certainly be something that crew will look forward to,’ he said, noting that even the smell of baked goods will be exciting. 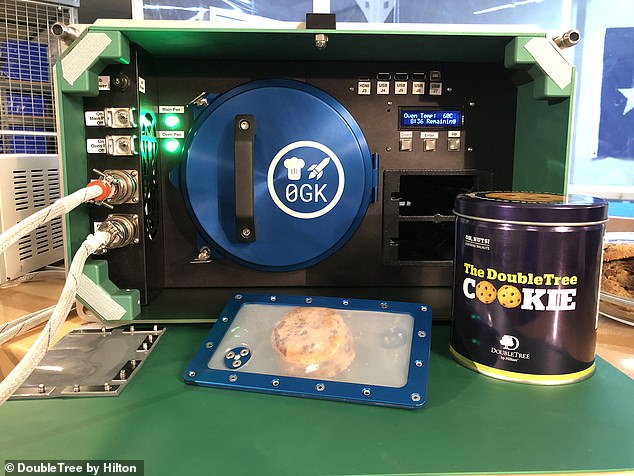 Sweet microgravity! The special cookie oven being sent to space can bake one cookie at a time, and has a special cooling rack that fits two cookies 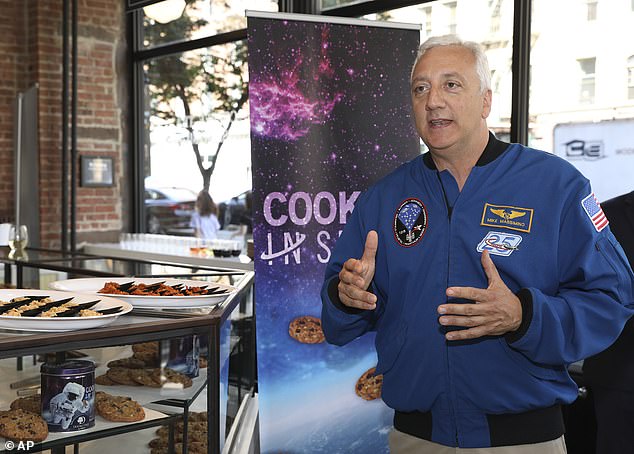 Ask the experts: Massimino said the cookies will be ‘a special treat,’ but also said the science experiment of baking in space will be interesting, particularly when it comes to their shape

‘You smell things… you smell each other, mainly. So I think this will be a nice difference,’ he said.

Visitors of the NASA visitor center gift shops, science museums, and even Disney World may be familiar with this treat, a Neapolitan ice cream bar with all the moisture sucked out.

‘I will never eat that stuff,’ he told DailyMail.com. ‘I had to taste it one time on a kids show — if you’re over 10 I don’t think you can eat that stuff. I think it’s disgusting.

‘I don’t know any astronaut that’s ever eaten it. I don’t know where it came from. But none of us is gonna eat that.’

But the innovation isn’t just for the enjoyment of the astronauts, it’s also — as most things in space are — a science experiment, since no one yet knows how something might bake differently in microgravity with artificial convection.

‘How’s a baked good gonna behave? What shape is it gonna be? Is it gonna taste the same?’ he asked, speculating on whether a cookie might come out puffier or more spherical than it would on Earth.

‘So it’s interesting because it does have a science education piece to it, and also your creature comfort hospitality component as well,’ he added.

‘We’ve done a lot of studies on bone loss, and muscle loss, and changes in physiology. All of the experiments we have have a payoff, but you don’t get to eat them!’

The experiment also marks something of a milestone for the Hilton brand, which first became involved with the idea of space travel more than 60 years ago, when Conrad Hilton announced plans to build a hotel on the moon back in 1958. 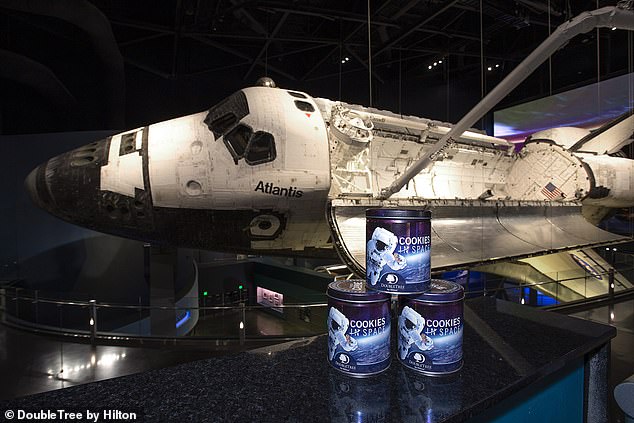 A decade later, his son Barron insisted that the 100-room subterranean Lunar Hilton Hotel — complete with piano bar and observation dome — would be built in his lifetime.

While that out-of-this-world idea never game to fruition, the brand is now officially making its way space following this big announcement, which sees the company teaming up with Zero G Kitchen and NanoRacks, a provider of commercial access to space.

And while this project has yet to be completed, Massimino is already thinking about the next foodie step, which, as far as he is concerned, is figuring out how to cook pizza in orbit.

He admitted that on his last mission, he even place an order for pizza while still in space, so that it would be delivered to his hotel room as soon as he landed.

The former NASA astronaut admitted he wouldn’t mind some ‘food you could grab and bite into,’ like burgers and sandwiches, either.