The US space agency confirmed that the SUV-sized rover has started to test the ancient lakebed in the Jezero crater by focusing its science instruments on rocks.

A camera called WATSON on the end of the rover’s robotic arm has taken detailed shots of the rocks, with extra data coming from a pair of zoomable cameras.

The Perseverance team tweeted: ‘The time has come: I’m switching from on-scene photographer to science investigator. Did this ancient lakebed ever have life? The tools I brought will help begin the hunt. I’m a bot on a mission.’

The rover arrived on Mars on February 18 and since landing has focused on testing its instruments, as well as recording and relaying data on Ingenuity flights.

NASA’s Perseverance Mars rover used its dual-camera Mastcam-Z imager to capture this image of ‘Santa Cruz’ a hill about 1.5 miles (2.5 kilometers) away from the rover

WHAT IS MASTCAM-Z USED TO FILM THE INGENUITY FLIGHT

The main purpose of Mastcam-Z, a camera mounted on a mast attached to Perseverance, is to take photos and video in high definition.

It is also able to capture panoramic, colour and 3D images of features in the atmosphere and on the surface.

It has a zoom lens so it can magnify distant targets, making it perfect to track the first Ingenuity flight.

It is mounted at the eye level of a 6 and a half foot tall person with two cameras about 9.5 inches apart.

NASA says it is the ‘main eyes’ of the Perseverance rover.

Now that Ingenuity has moved from a technical demonstration, to taking up the new role as a scout for Perseverance, the ‘science can begin,’ the agency explained.

Using its suite of cameras, Perseverance has been taking images of rocks on the floor of the crater, which was once a lakebed billions of years ago.

What insights they turn up will help scientists create a timeline of when an ancient lake formed there, when it dried, and when sediment began piling up in the delta that formed in the crater long ago.

Understanding this timeline should help date rock samples – to be collected later in the mission – that might preserve a record of ancient microbes.

A camera called WATSON on the end of the rover’s robotic arm has taken detailed shots of the rocks for scientists to study.

A pair of zoomable cameras that make up the Mastcam-Z imager on the rover’s ‘head’ worked to survey the terrain, and a laser instrument called SuperCam has zapped some of the rocks to detect their chemistry.

These instruments and others allow scientists to learn more about Jezero Crater and to home in on areas they might like to study in greater depth.

One important question scientists want to answer is whether these rocks are sedimentary like sandstone, or igneous  and formed by volcanic activity.

Each type of rock tells a different kind of story, NASA explained.

Some sedimentary rocks – formed in the presence of water from rock and mineral fragments like sand, silt, and clay – are better suited to preserving biosignatures, or signs of past life.

Igneous rocks, on the other hand, are more precise geological clocks that allow scientists to create an accurate timeline of how an area formed.

One complicating factor is that the rocks around Perseverance have been eroded by wind over time and covered with younger sand and dust.

Perseverance Mars rover viewed these rocks using its Mastcam-Z imager. Stitched together from 21 images. The bottom version is a colour anaglyph made for viewing through red-blue 3D glasses

On Earth, a geologist might trudge into the field and break a rock sample open to get a better idea of its origins, said Ken Farley, Perseverance project scientist.

‘When you look inside a rock, that’s where you see the story,’ he added.

While Perseverance doesn’t have a rock hammer, it does have other ways to peer past millennia’s worth of dust.

When scientists find a particularly enticing spot, they can reach out with the rover’s arm and use an abrader to grind and flatten a rock’s surface, revealing its internal structure and composition. 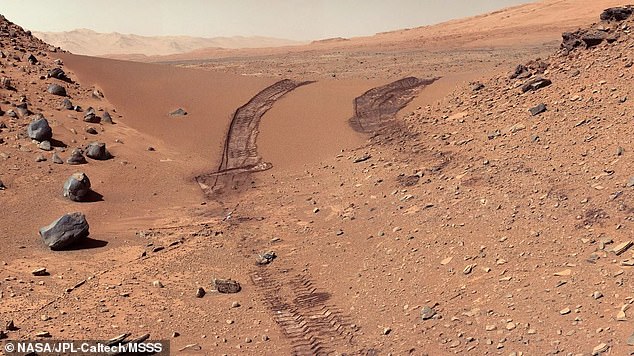 Once they’ve done that, the team gathers more detailed chemical and mineralogical information using other instruments on the arm.

This includes Planetary Instrument for X-ray Lithochemistry (PIXL) and Scanning for Habitable Environments with Raman & Luminescence for Organics & Chemicals (SHERLOC).

‘The more rocks you look at, the more you know,’ Farley said, adding that the more the team knows, the better samples they can ultimately collect with the drill.

The best ones will be stored in special tubes and deposited in collections on the planet’s surface for eventual return to Earth. 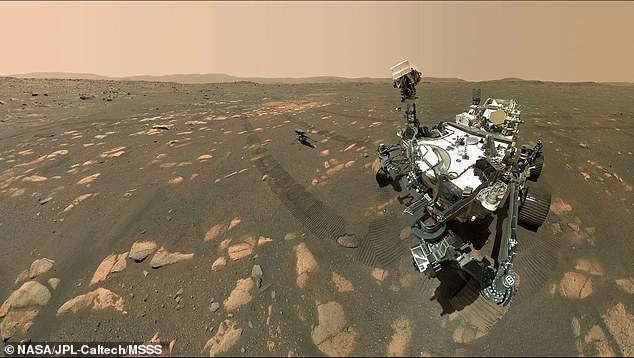 NASA’s Perseverance Mars rover took a selfie with the Ingenuity helicopter, seen here about 13 feet (3.9 meters) from the rover. This image was taken by the WATSON camera on the rover’s robotic arm on April 6, 2021

A key objective for Perseverance’s mission on Mars is astrobiology, including the search for signs of ancient microbial life.

The rover will characterise the planet’s geology and past climate, pave the way for human exploration of the Red Planet, and be the first mission to collect and cache Martian rock and regolith (broken rock and dust).

Subsequent NASA missions, in cooperation with ESA (European Space Agency), would send spacecraft to Mars to collect these sealed samples from the surface and return them to Earth for in-depth analysis.