Launched in 1977, Voyager 2 is a little less than 11 billion miles (about 17.7 billion kilometers) from Earth, or more than 118 times the distance from Earth to the Sun.

NASA said the craft has detected an increase in cosmic rays that originate outside our solar system, a sign it closing in on the edge of the solar system.

‘We’re seeing a change in the environment around Voyager 2, there’s no doubt about that,’ said Voyager Project Scientist Ed Stone, based at Caltech in Pasadena.

‘We’re going to learn a lot in the coming months, but we still don’t know when we’ll reach the heliopause.

‘We’re not there yet — that’s one thing I can say with confidence.’

Since 2007 the probe has been traveling through the outermost layer of the heliosphere – the vast bubble around the Sun and the planets dominated by solar material and magnetic fields.

Voyager scientists have been watching for the spacecraft to reach the outer boundary of the heliosphere, known as the heliopause.

Once Voyager 2 exits the heliosphere, it will become the second human-made object, after Voyager 1, to enter interstellar space. 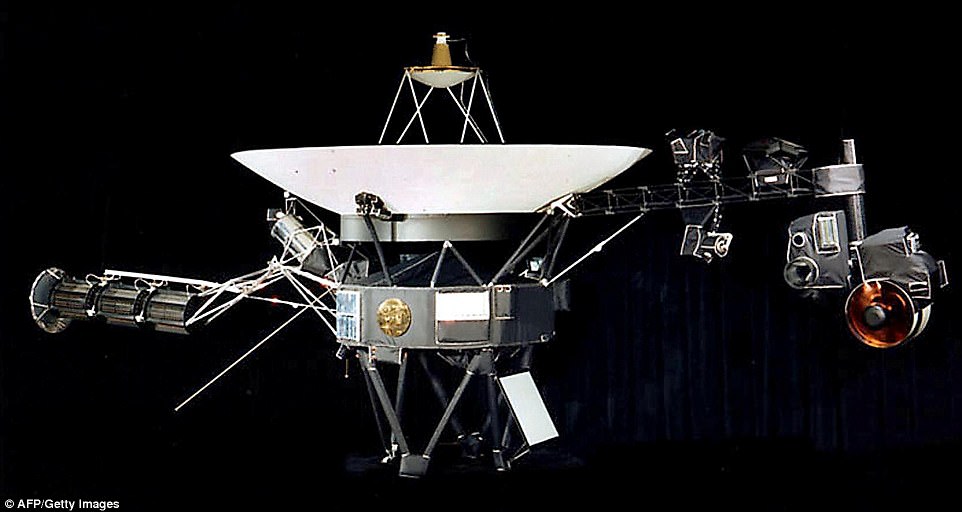 One of the twin Voyager spacecraft, which is now 13 billion miles from Earth. Engineers this week tried to fire up a set of thrusters on the craft – and they worked perfectly.

Since late August, the Cosmic Ray Subsystem instrument on Voyager 2 has measured about a 5 percent increase in the rate of cosmic rays hitting the spacecraft compared to early August, NASA said.

Cosmic rays are fast-moving particles that originate outside the solar system.

The Voyager spacecraft were built by NASA’s Jet Propulsion Laboratory in Pasadena, California, which continues to operate both.

Each spacecraft carries a golden record on board – a record that includes sounds, pictures and messages of Earth.

Continuing on their more-than-37-year journey since their 1977 launches, they each are much farther away from Earth and the sun than Pluto.

In August 2012, Voyager 1 made the historic entry into interstellar space, the region between stars, filled with material ejected by the death of nearby stars millions of years ago. 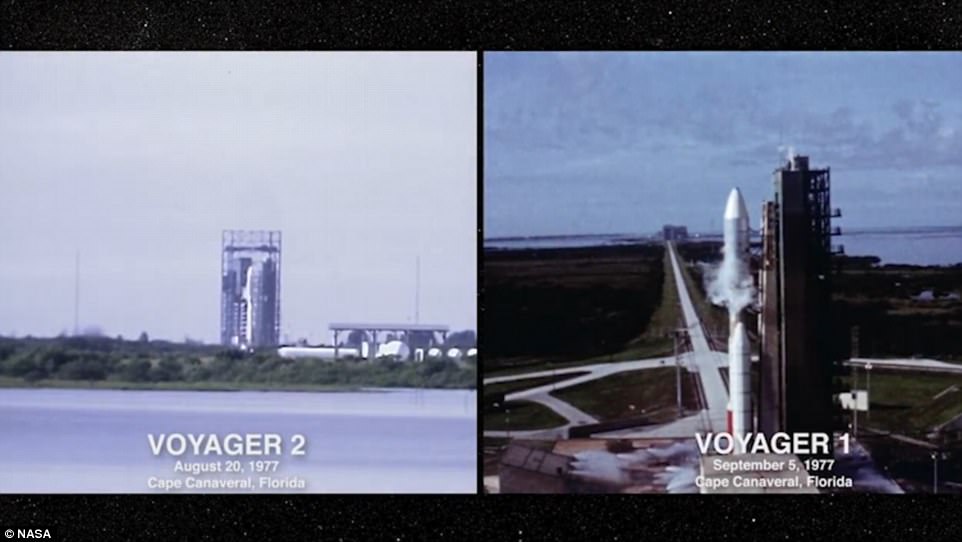 Humanity’s farthest and longest-live spacecraft, Voyager 1 and 2, are celebrating 40 years of operation and exploration this month. Nasa launched the Voyager 1 spacecraft on September 5 1977, and the Voyager 2 on August 20 1977 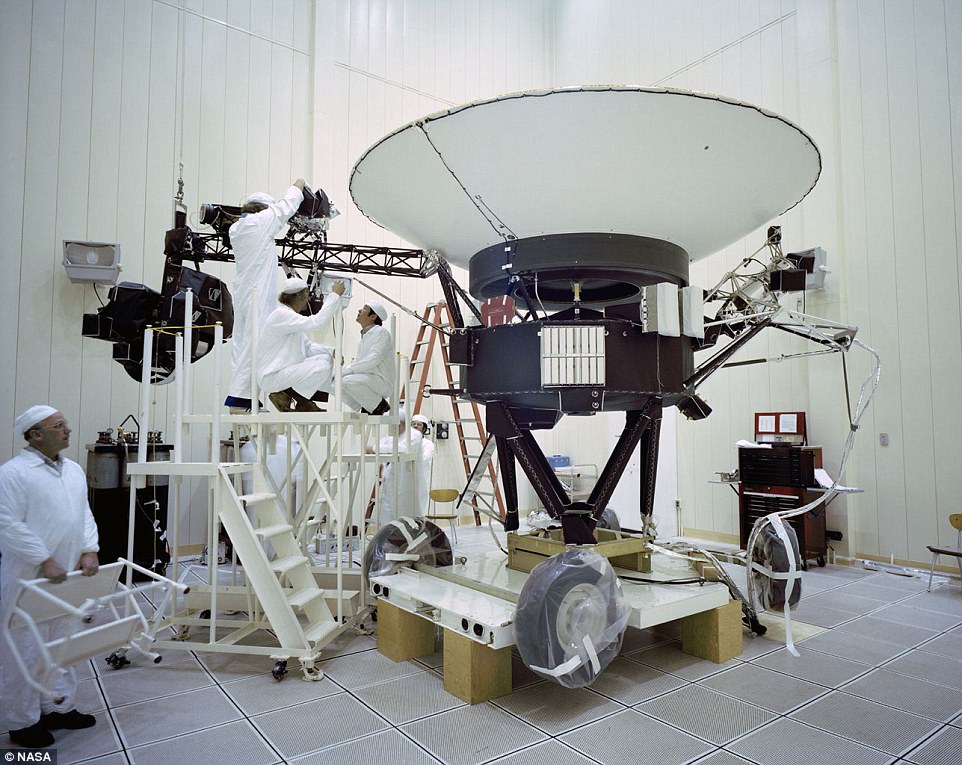 This archival photo shows engineers working on the Voyager 2 spacecraft on March 23, 1977. Voyager 2 is the only spacecraft to have flown by all four outer planets – Jupiter, Saturn, Uranus and Neptune

Scientists hope to learn more about this region when Voyager 2, in the ‘heliosheath’ — the outermost layer of the heliosphere where the solar wind is slowed by the pressure of interstellar medium — also reaches interstellar space.

Both spacecraft are still sending scientific information about their surroundings through the Deep Space Network, or DSN.

The primary mission was the exploration of Jupiter and Saturn.

After making a string of discoveries there — such as active volcanoes on Jupiter’s moon Io and intricacies of Saturn’s rings — the mission was extended.

Voyager 2 went on to explore Uranus and Neptune, and is still the only spacecraft to have visited those outer planets.

The adventurers’ current mission, the Voyager Interstellar Mission (VIM), will explore the outermost edge of the Sun’s domain. And beyond.

In May 2012, Voyager 1 experienced an increase in the rate of cosmic rays similar to what Voyager 2 is now detecting. That was about three months before Voyager 1 crossed the heliopause and entered interstellar space.

However, Voyager team members note that the increase in cosmic rays is not a definitive sign that the probe is about to cross the heliopause. 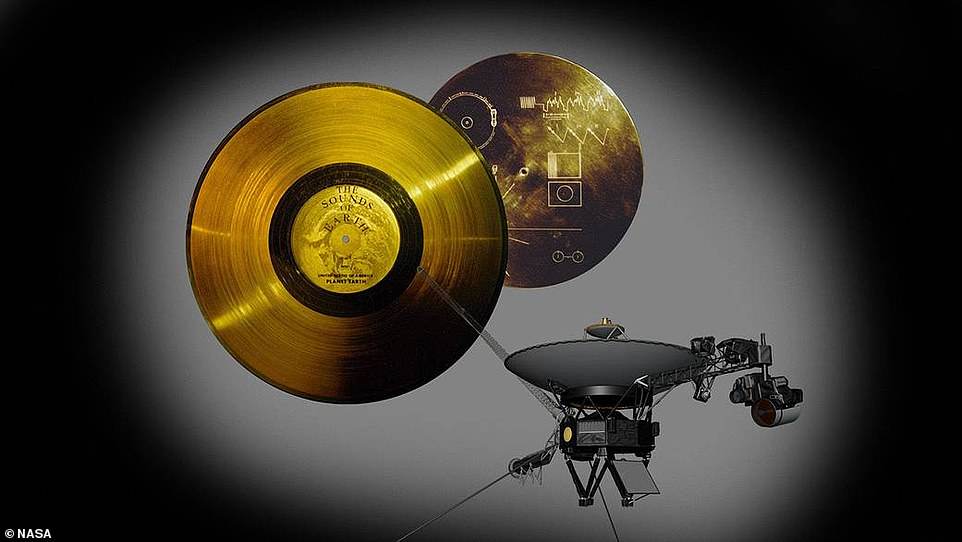 Each spacecraft carries a golden record on board – a record that includes sounds, pictures and messages of Earth.

The fact that Voyager 2 may be approaching the heliopause six years after Voyager 1 is also relevant, because the heliopause moves inward and outward during the Sun’s 11-year activity cycle.

Solar activity refers to emissions from the Sun, including solar flares and eruptions of material called coronal mass ejections.

During the 11-year solar cycle, the Sun reaches both a maximum and a minimum level of activity.

Last year NASA engineers fired up a set of thrusters on the Voyager 1 craft – and they worked perfectly.

The spacecraft, which has been flying for 40 years, relies on small devices called thrusters to orient itself so it can communicate with Earth.

These thrusters fire in tiny pulses, or ‘puffs,’ lasting mere milliseconds, to subtly rotate the spacecraft so that its antenna points at our planet.

Now, the Voyager team is able to use a set of four backup thrusters, dormant since 1980. 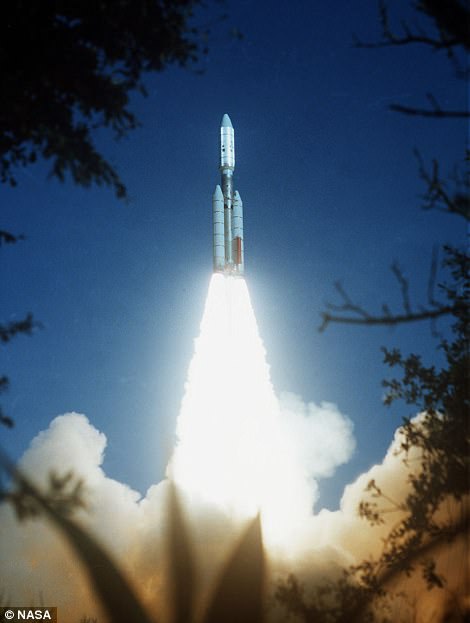 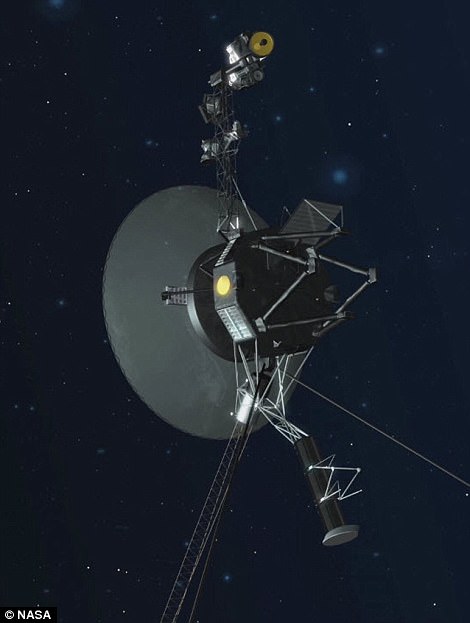 Voyager 2 was launched on August 20, 1977, from the Nasa Kennedy Space Center at Cape Canaveral in Florida, propelled into space on a Titan/Centaur rocket (pictured left). Pictured right is an artist/s  concept depicting one of the twin Voyager spacecraft 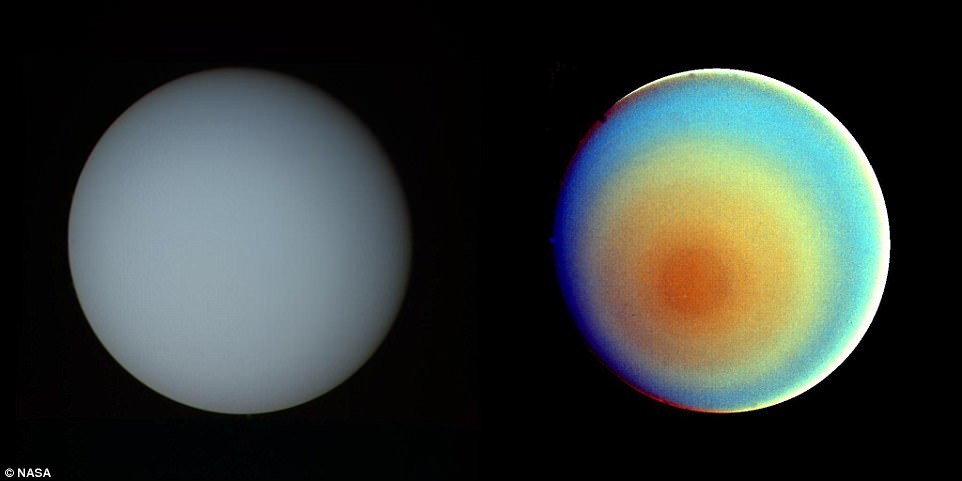 These two pictures of Uranus – one in true colour (left) and the other in false colour – were compiled from images returned January 17, 1986, by the narrow-angle camera of Voyager 2

‘With these thrusters that are still functional after 37 years without use, we will be able to extend the life of the Voyager 1 spacecraft by two to three years,’ said Suzanne Dodd, project manager for Voyager at NASA’s Jet Propulsion Laboratory, Pasadena, California.

Since 2014, engineers have noticed that the thrusters Voyager 1 has been using to orient the spacecraft, called ‘attitude control thrusters,’ have been degrading.

Over time, the thrusters require more puffs to give off the same amount of energy.

The thruster test went so well, the team will likely do a similar test on the TCM thrusters for Voyager 2, the twin spacecraft of Voyager 1.

The attitude control thrusters currently used for Voyager 2 are not yet as degraded as Voyager 1’s, however. 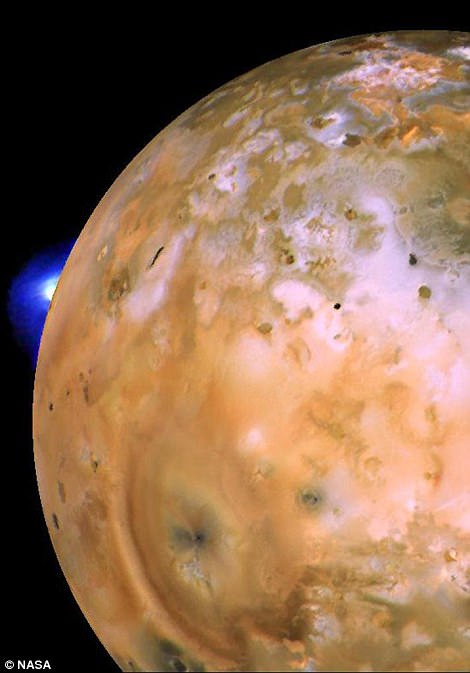 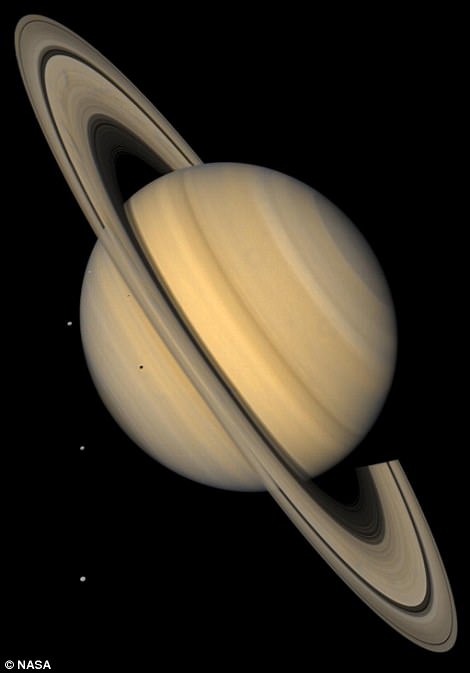 Voyager 1 took this stunning image of Io (pictured left) showing an active plume of Loki on limb. Pictured right is an image of Saturn taken in Voyager’s blue and violet filters and processed to recreate an approximately natural colour and contrast

Mr Ed Stone, Voyager project scientist, said: ‘None of us knew, when we launched 40 years ago, that anything would still be working, and continuing on this pioneering journey.

‘The most exciting thing they find in the next five years is likely to be something that we didn’t know was out there to be discovered.’

The Voyagers’ power decreases by around four watts a year, meaning engineers have having to operate the spacecraft under ever-tighter power constraints.

Ms Suzanne Dodd, Voyager project manager, said: ‘The technology is many generations old, and it takes someone with 1970s design experience to understand how the spacecraft operate and what updates can be made to permit them to continue operating today and into the future.’

Unfortunately, Nasa predicts that it will have to turn off the last science instrument by 2030.

But even after the spacecraft go silent, they will continue their journey, completing an orbit within the Milky Way every 225 million years. 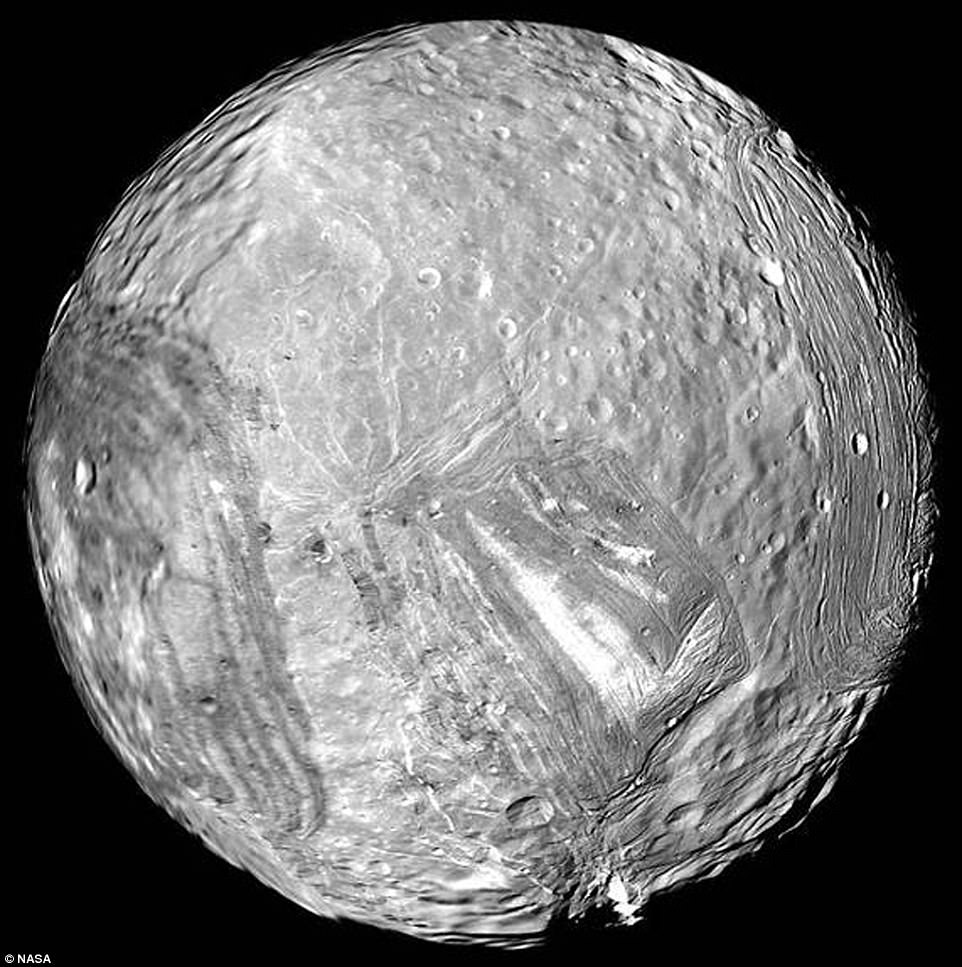 Uranus’ icy moon Miranda is seen in this image from Voyager 2 on January 24, 1986. Unfortunately, Nasa predicts that it will have to turn off the last science instrument by 2030. But even after the spacecraft go silent, they will continue their journey, completing an orbit within the Milky Way every 225 million years 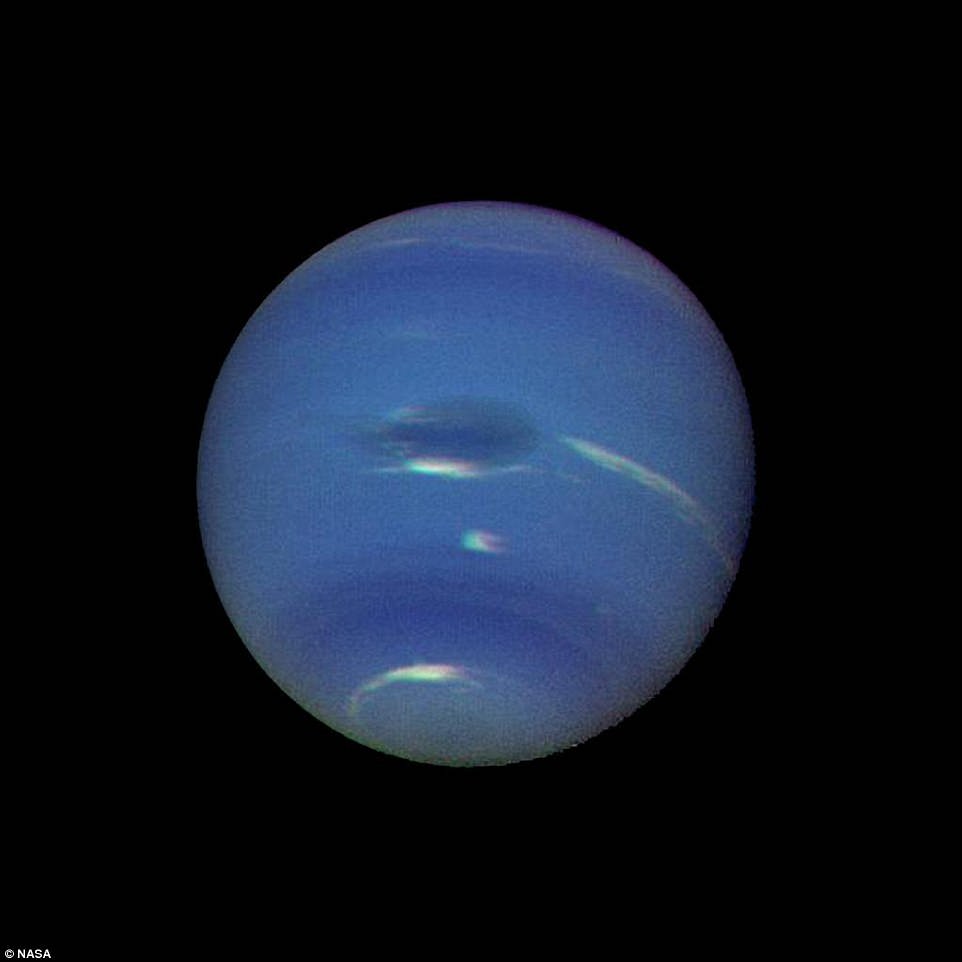