NASCAR Xfinity driver Conor Daly has lost one of his sponsors because of a racial slur made by his racing driver father in the 1980s before he was even born.

Lilly Diabetes said in a statement on Friday that it was pulling sponsorship of Daly’s No.6 car in the NASCAR Xfinity race at Road America, citing the racially insensitive remark made by his father Derek Daly that surfaced this week.

The company said in a statement that its sponsorship was intended to raise awareness for treatment options and resources for people living with diabetes.

‘Unfortunately, the comments that surfaced this week by Derek Daly distract from this focus, so we have made the decision that Lilly Diabetes will no longer run the No. 6 at Road America this weekend,’ Lilly said.

Lilly Diabetes has pulled its sponsorship of Conor Daly’s No. 6 car in the NASCAR Xfinity race at Road America after a racially insensitive remark made by the driver’s father in the 1980s resurfaced

Primarily an IndyCar driver, Conor Daly will make his NASCAR debut at the rural Wisconsin road course on Saturday with Roush Fenway Racing.

‘The last (24 hours) have been quite an unnecessarily difficult ride for my family. There is A LOT I want to say… but I’m still here and still racing,’ Daly wrote on Twitter on Friday night.

He found himself caught up in controversy this week after his father Derek and Indianapolis Colts radio voice Bob Lamey both admitted to using the N-word.

The elder Daly, who is a former Indy 500 and Formula One driver, was fired from his job as a WISH-TV racing analyst this week following the news that he had used the N-word in an interview 30 years ago.

It resurfaced after longtime Indianapolis Colts radio voice Bob Lamey used the word during a training camp last week as he retold the story of Daly’s radio interview from the 1980s.

Lamey abruptly retired in the wake of the comments. 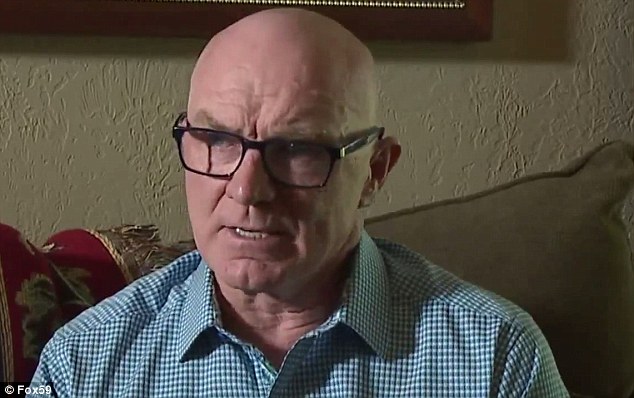 Derek Daly, who is a former Indy 500 and Formula One driver, was fired from his job as a WISH-TV racing analyst this week following the news that he had used the N-word in an interview 30 years ago 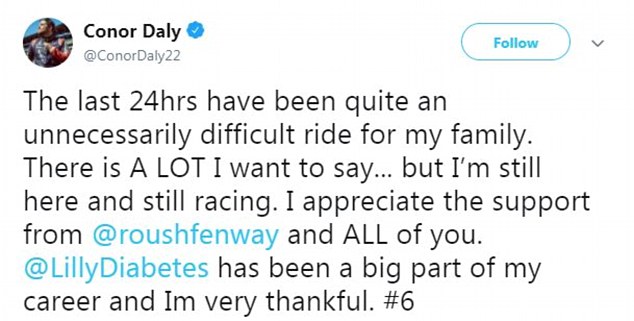 In a statement , Daly said he admitted to using the slur during the interview. Daly, who had just moved to the US at the time, said the term had a different meaning and connotation in his native Ireland.

He said he was ‘mortified” when he learned how the term was used in America and has never used it since then.

Daly’s 26-year-old Conor wasn’t born when he made the comment.

‘Finally, I want everyone to know I deeply regret and sincerely apologize for what I said more than three decades ago,’ the elder Daly said in his statement.

‘We remain committed to our mission of supporting people with diabetes,’ Lilly said.

Conor thanked Roush Fenway and Twitter followers for their support in the wake of the controversy. He also thanked his former sponsor.

‘Lilly Diabetes has been a big part of my career and I’m very thankful,’ Daly wrote.