Nasty Nick? Only thing he did aggressively was eat a banana: JANE FRYER watches a calm Nick Kyrgios

So here we are on day eight of Wimbledon where – despite abusing linesmen, umpires, opponents, spitting at the crowd, racking up record fines, being called a ‘bully’ and ‘evil’, and refusing to apologise for any of it – Nick Kyrgios was promoted to the hallowed Centre Court to battle it out with 20-year-old Brandon Nakashima for a place in the quarter-finals.

And from the minute he swaggers out in his red Nike Airs, jewellery gleaming, cap on backwards and his heavily-tattooed arms rippling in the sun, you can see why.

Because Kyrgios is box office gold and, despite – or perhaps because of his often appalling behaviour – the crowd adores him.

They don’t care that many in the tennis world consider him a total disgrace – among them the BBC’s Andrew Castle who bizarrely, in more than three hours of commentary which includes 35 aces from the Australian, struggled to say a good word about ‘Nasty Nick’. 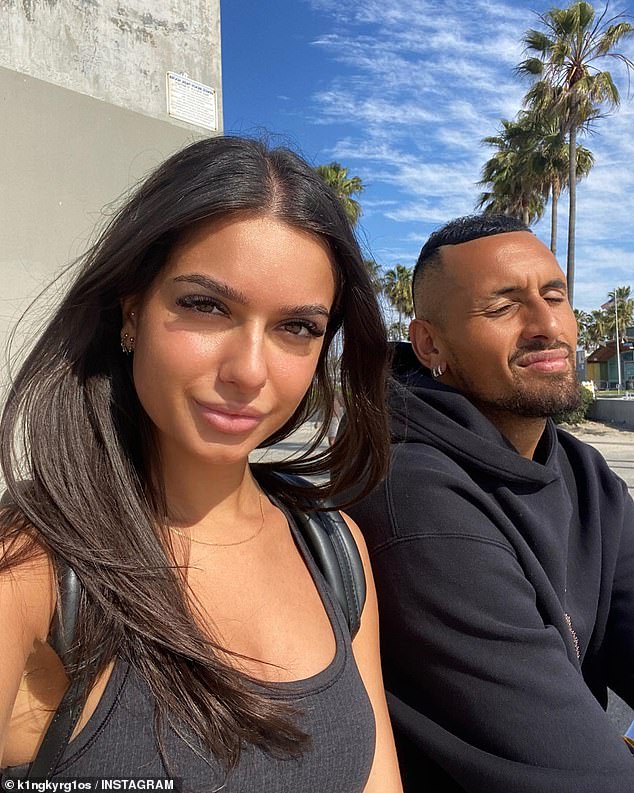 Kyrgios and his girlfriend of seven months Costeen Hatzi, whom he describes as ‘the best girlfriend in the world’

No, they can’t keep their eyes off his fluid strokes and showboat tennis. They admire his diamante earrings and crane to read the inspirational messages such as ‘Give a man a mask and he will become his true self’ and the name of his girlfriend of seven months Costeen Hatzi – whom he describes as ‘the best girlfriend in the world’ – inked across his body.

But perhaps most of all, they’re waiting for the next outrageous, utterly unforgivable but totally gripping explosion. And waiting…

Because after all the histrionics last week, today it’s blessedly subdued. Just a low-level confrontation with the umpire about the state of the court – which seems to perk Kyrgios up no end. And a lot of fuss about a shoulder pain that some, especially curmudgeonly Castle, dismiss as a distraction to put off his opponent.

Of course, there’s no denying that Kyrgios adores any attention on him. But after a couple of dramatic shoulder rubs from the physio, the rest is just brilliant tennis.

It starts slowly – and rather haltingly – but gets better and better. Stylish and always unexpected – for once, he is really focusing on the game in hand. Ace after stunning ace. Bouncing about. Lobbing one shot through his legs as Nakashima battles valiantly back. 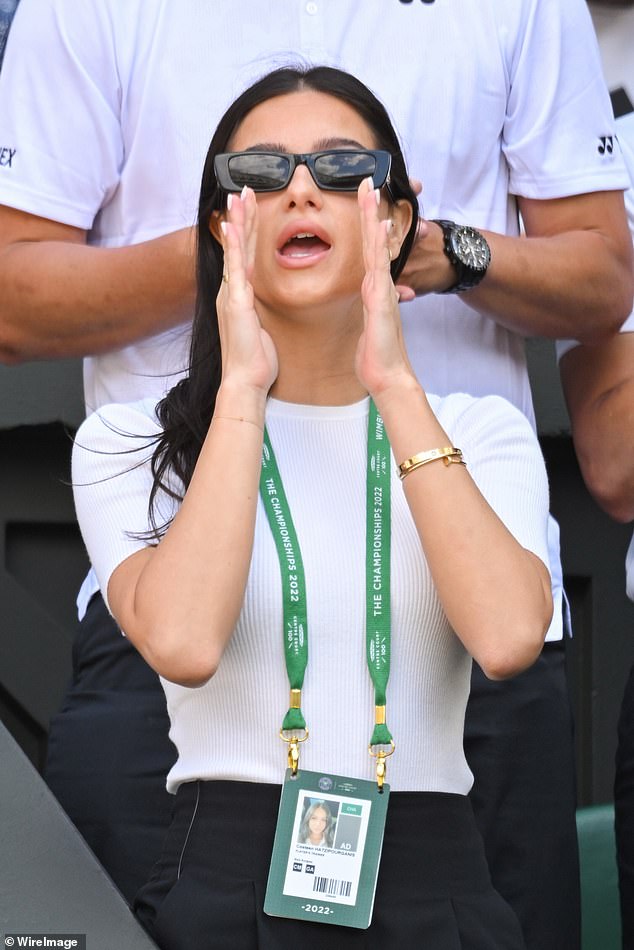 Usually, Kyrgios seems to put more effort into being brutish than into his play. He’s thrown chairs, made offensive comments about his opponents’ girlfriends and some rather obscene gestures with a bottle of water.

But today, nothing. He doesn’t even hurl a racket! The only time he looks vaguely aggressive is when he’s eating a banana. In fact, according to a very agitated Twitter, the most annoying person today is not Kyrgios, but Castle, who somehow manages to be both unduly judgy and wittery at once.

He just doesn’t seem to know when to stop as he criticises everything from Kyrgios’s lack of concentration, his supposed attention-seeking, his suspect shoulder injury, his entourage – even the number of towels he uses and his failure to stack then neatly afterwards get a mention. Oh shush Andrew! He’s not working in a laundrette, he’s trying to win a place in the quarter-final.

Which, of course, he duly does. And then makes some very stylish comments about his promising young opponent and lets slip that he once had to be dragged out of a pub at 4am to play Rafael Nadal the next day. ‘I’ve come a long way, that’s for sure,’ he says.

All of which is rather discombobulating when we’re expecting the ‘bad boy of tennis’.

Lord knows what’s happened. Maybe it’s the dogged calm of impressive young Nakashima who, unlike poor old Stefanos Tsitsipas on Saturday, simply refuses to be flustered and will surely be a star of the future.

Perhaps Kyrgios tried a spot of pre-match meditation to keep calm as he despatched his 137mph serves. Or possibly, aged 27, he’s finally growing up? Whatever, it’s clearly working. Maybe he could give Andrew Castle some tips.