The veteran journalist asked the Deputy Prime Minister and Labor MP Joel Fitzgibbon on Monday morning about whether Sydney was locked down early enough amid rising Covid-19 case numbers, when the interview took an unexpected turn.

Mr Fitzgibbon began by speaking about importance of Australia’s vaccine rollout, but in the same breath he steered the conversation away from the pandemic and asked why Mr Joyce, who is from NSW, supports Queensland in the State of Origin.

‘The other big story this morning Nat, well the question is, why is it that Barnaby Joyce is a Queensland supporter?’ he asked.

Queensland lost to the NSW at the State of Origin at Suncorp Stadium on Sunday evening.

Ms Barr tried to get the interview back on track, but the newly-appointed deputy leader insisted on answering the question.

Speaking over the top of the host, Mr Joyce said: ‘I can answer that question.’

‘Let’s get back on to the news,’ she replied.

‘I can answer that question,’ the 54-year-old replied, before launching into a speech about his footy prowess.

‘I played my first game of league in Queensland, for the Charleville Railways mate,’ he said, fist-pumping the air.

Despite Ms Barr’s interjections, he continued to explain how his team’s main opponents were the ‘Charleville All-White’s, who were mostly Aboriginal, which was a very interesting day on the football paddock’. 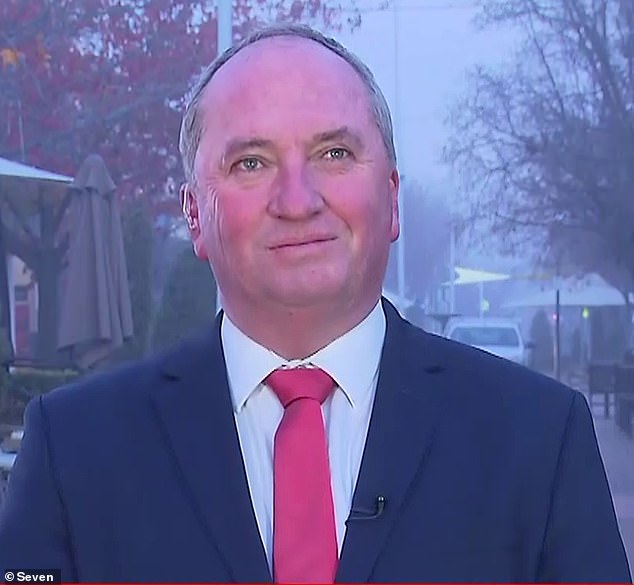 ‘Okay, let’s get on to the vaccination rollout,’ the host finally said. ‘We were the envy of the world, but now the world is opening up.’

Mr Joyce finally answered the question and said he takes ‘comfort in the fact that in the last night days we’ve vaccinated one million people’.

Health Minister Greg Hunt and the federal government on Friday said about 7million people have been vaccinated since February.

NSW recorded 18 new Covid cases on Monday, with all but one linked to the current cluster in Sydney’s eastern suburbs. The total number of infections in the state is 126.

Queensland recorded three new locally transmitted cases on Monday – one new case is believed to the Alpha strain and linked to the cluster involving the Portuguese Family Centre in Brisbane.

Victoria and the Northern Territory also recorded new cases over the weekend.