A militant vegan activist credited in the production of acclaimed vegan documentary Dominion has been exposed as a milk chocolate-loving fraud.

Natalie Cruz – who goes by the name Natalie Shanti – has been a vocal campaigner for the vegan movement and has protested against non-vegans on busy city streets.

She has also been an online champion for the vegan movement and is known among vegan circles to be a die hard believer who has allegedly trolled non vegans.

Natalie Cruz – who goes by the name Natalie Shanti – has been a vocal campaigner of the vegan movement and appears in the credits of the vegan documentary Dominion. 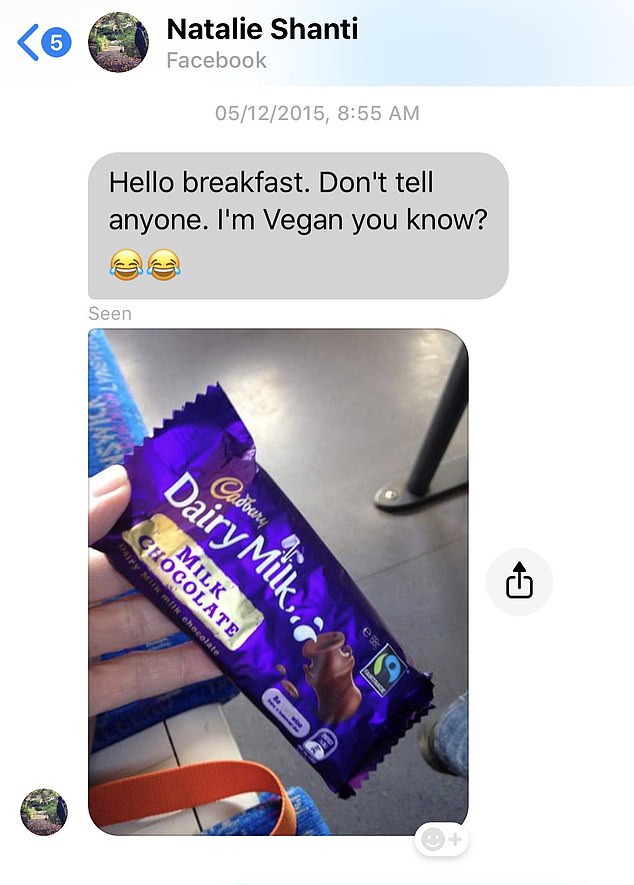 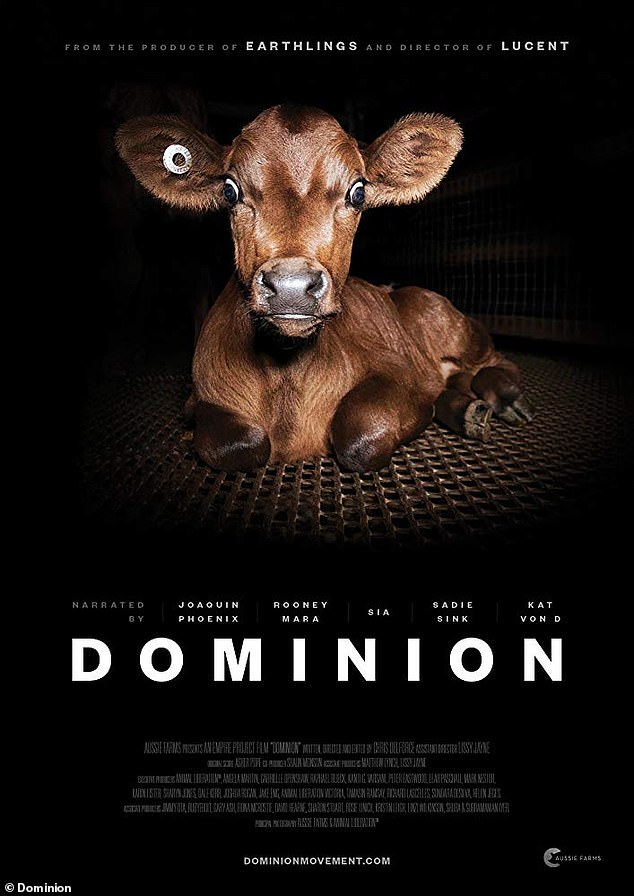 In 2017, Ms Cruz and her mates ambushed the screening of an episode of Masterchef in Melbourne.

During that protest, Ms Cruz  held a poster of a shark with the banner ‘I am not an ingredient, I am someone’.

‘We want vegan contestants to go on the show and prove to the audience that you can cook amazing and nutritious meals without using meat or dairy,’ Ms Cruz said at the time.

Ms Cruz claims to be an ethical vegan, whose followers not only avoid consuming meat and other animal-derived substances, including eggs and milk, but oppose the use of animals for any purpose.

But in a series of exchanges provided to Daily Mail Australia by an old friend of Ms Cruz, the self-proclaimed vegan confessed she wasn’t the real deal.

The source, who asked not to be identified due to fear of reprisals from real vegans, said Ms Cruz confided in her after she was caught out buying dairy products.

In a message sent in September 2015, she confessed she’s not really a vegan, despite long claiming to be one.

‘I am at home mostly, but when I’ve been going out I’ve been eating whatever. It’s just too hard to try and cater around the veganism stuff if I’m going to functions and people’s places etc,’ she stated.

As the pair bonded, the alleged vegan went on to divulge she enjoyed eating milk chocolate for breakfast and criticised the vegan movement she has become a champion for.

‘Silly vegans,’ she calls them in one message.

‘I am sorry about all the ridiculous vegan nazis,’ she states in another.

And: ‘Silly annoying vegans,’ in yet another crack.

She later referred to one as a ‘psycho’. 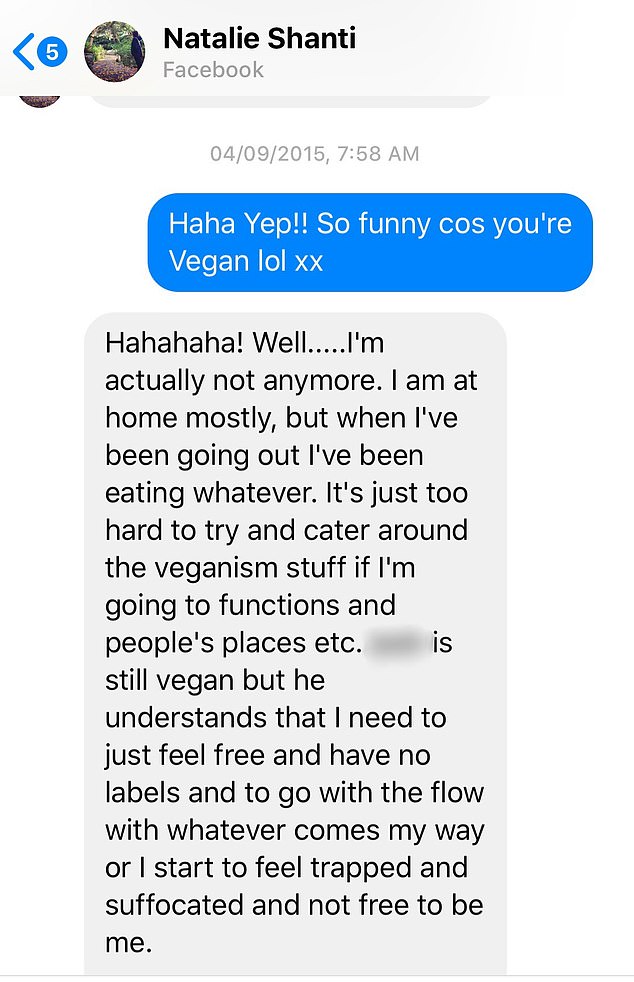 In a 2015 message, Natalie Cruz – who goes by the name Natalie Shanti – confessed that she wasn’t actually a real vegan despite telling everyone she was 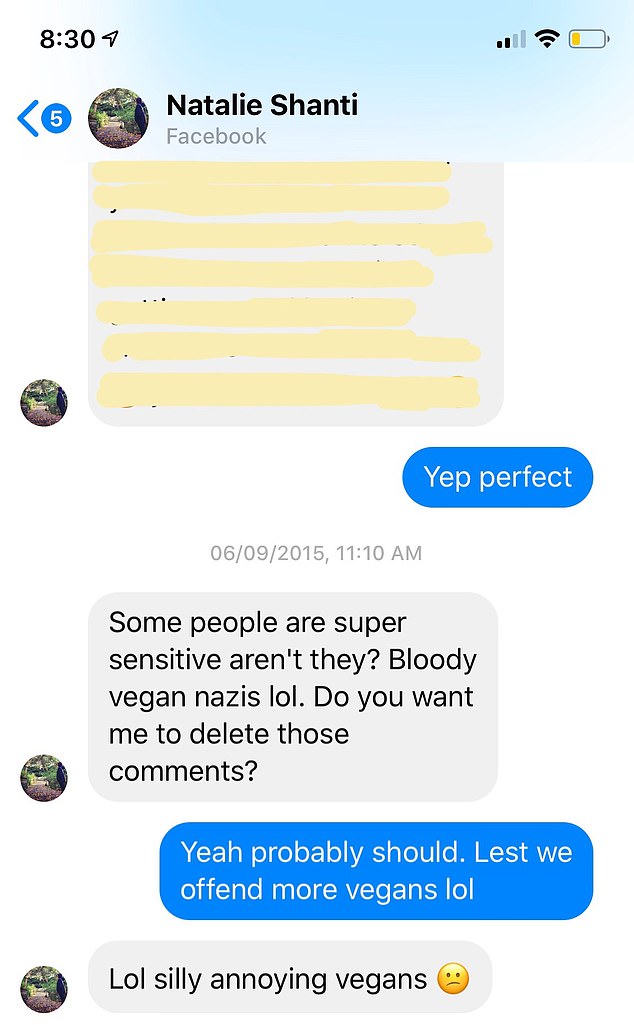 Vegan Nazis: Natalie Cruz – who goes by the name Natalie Shanti – in grey – criticises vegans in a message to a friend, labeling them ‘Nazis’ 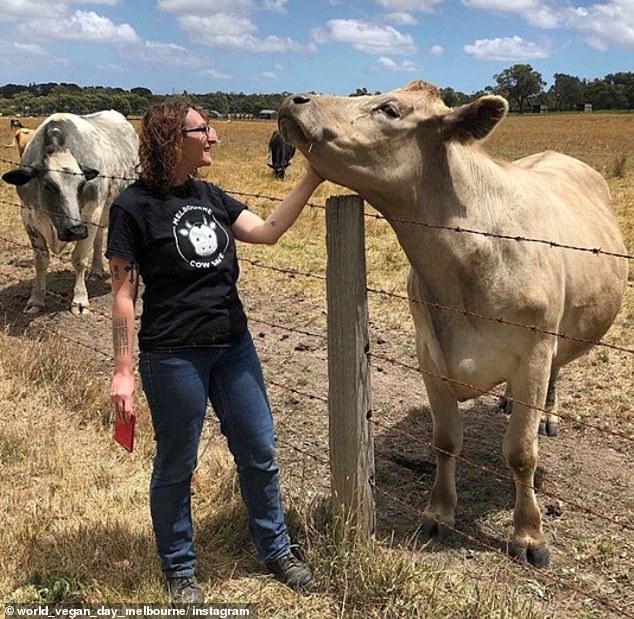 Natalie Cruz- who goes by the name Natalie Shanti – has criticised the milk industry, but has enjoyed the odd block of milk chocolate herself

Ms Cruz has been contacted by Daily Mail Australia by email, text message and phoned repeatedly, but did not respond.

In an Instagram post on World Vegan Day in August last year, it was claimed Ms Cruz had been a vegan for just three years.

‘I became vegan as I moved to the country from the city and saw everything that was happening with my own eyes,’ she stated. ‘We visited dairy farms where our friends worked and watched them call trucks to come and pick up their Bobby Calves because they can’t produce milk and were “useless” so they were heading to slaughter.

‘Learning about the industry and seeing everything with my own eyes made me realise that I didn’t want to contribute to this violence and suffering anymore.’

But Daily Mail Australia has been told Ms Cruz went as far as to buy the source groceries containing meat and dairy products when she was ill and accepted an ice-cream while out on another occasion.

The source came forward after seeing her name at the closing credits for Dominion, which began sourcing crowd funding in 2015 at about the same time Ms Cruz was slagging off vegans, which she claimed to be.

The controversial film used used drones, hidden and handheld cameras to: ‘expose the dark underbelly of modern animal agriculture, questioning the morality and validity of humankind’s dominion over the animal kingdom’.

Narrated by Hollywood big shot Joaquin Phoenix, who features in the upcoming movie: The Joker, the film is a gut wrenching watch for even the biggest of meat eaters and has been lauded by vegans across the world.

Ms Cruz has earned a respectable following in recent years via her blog nat-wanderlust.com and Instagram page.

She is also an organiser at Melbourne Cow Save, which aims to inform the community about ‘the suffering and torture of Cows and Calves in the meat, dairy, leather and pet food industries’. 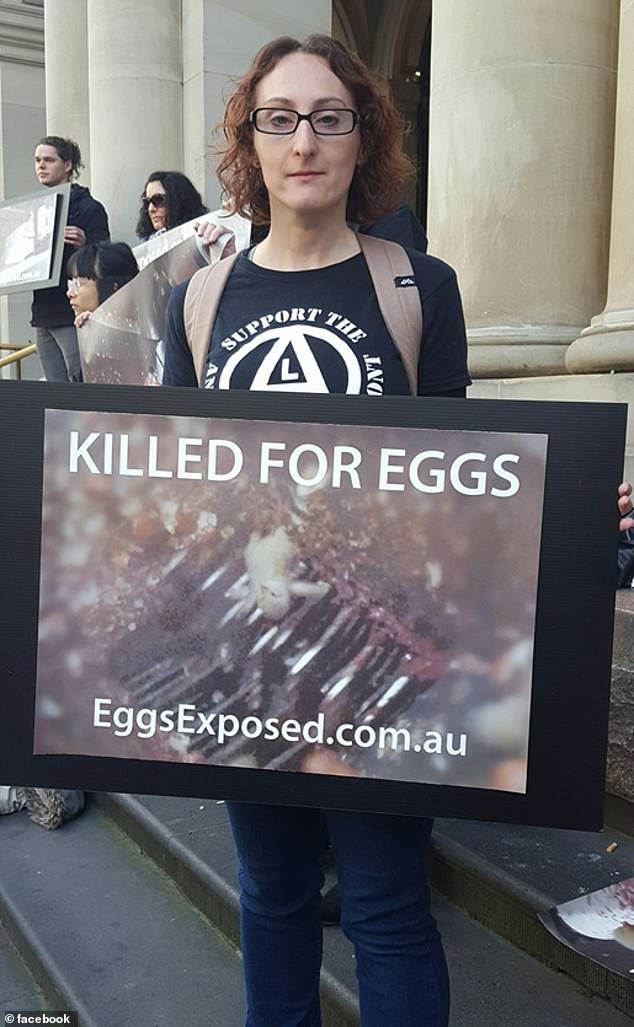 Vegan protester Natalie Cruz – who goes by the name Natalie Shanti – takes to the streets to preach her view of the world. She pretended for years to be a vegan while enjoying dairy products 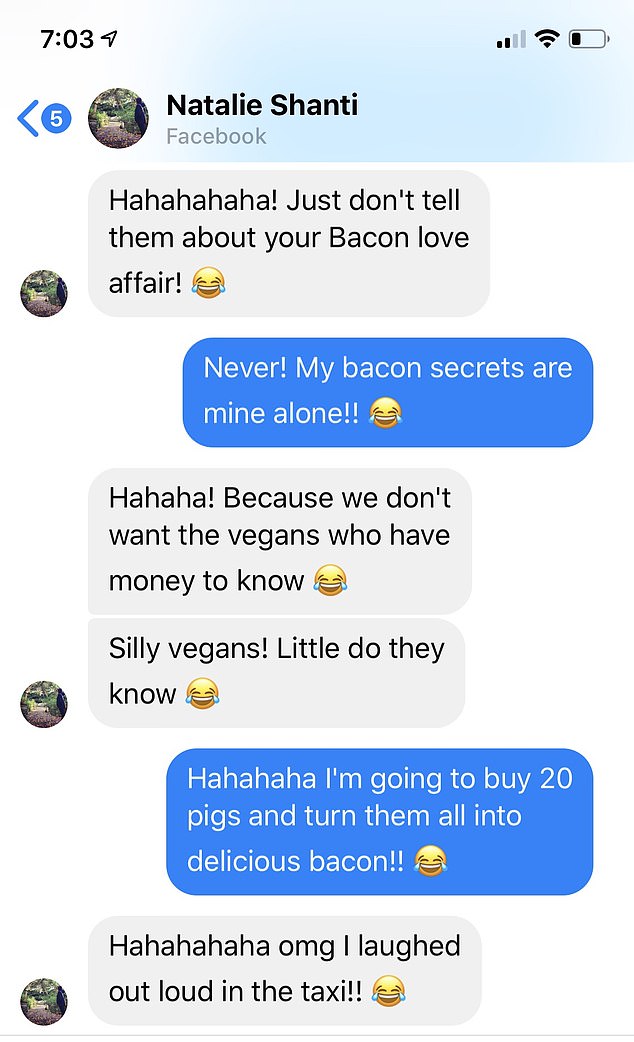 Natalie Cruz- who goes by the name Natalie Shanti – messages a friend. Her texts appear in the grey coloured boxes 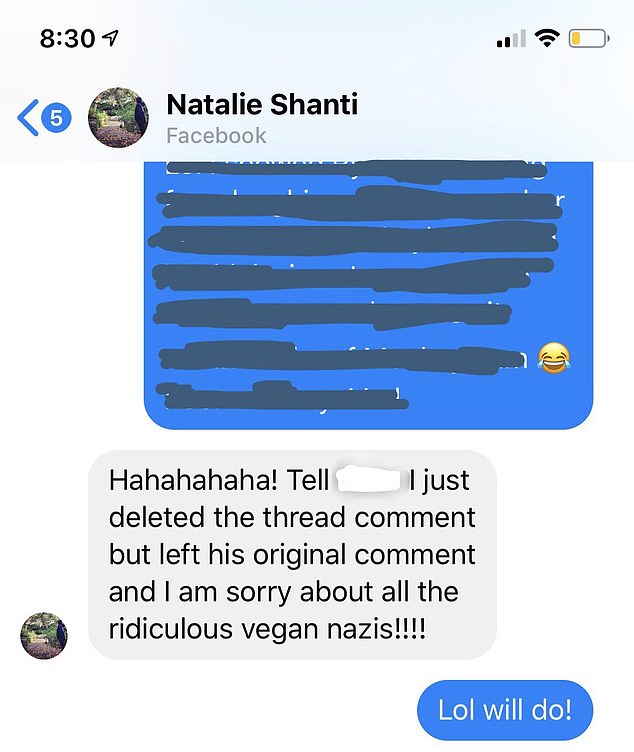 ‘These militant vegans are zealots. Busting up farms and such, it’s disgusting,’ the source said.

‘The fact she pretended to be vegan while hanging sh*t on them is bad enough. She’s very well known in the vegan world. She’s very high profile. And those people in that world have known her for a good 10 years or so. And all that time they thought she was a staunch vegan. ‘

The revelations are sure to annoy both vegans and non-vegans, whom have been targeted by Ms Cruz’s militant comrades in recent times across the country.

Last year customers enjoying a meal at Outback Jacks, in Northbridge Perth, were shocked as members of the militant vegan activist group Direct Action Everywhere barged in to slam their love of meat.

One activist chanted ‘it’s not food’ while the rest of the group responded, ‘it’s violence’.

Mr Barilaro announced in July that trespassers would be hit with fines of up to $220,000 per person and $440,000 for corporations, effective from August 1.

Last Sunday in New Zealand, vegan activists dressed in black stormed a supermarket and formed a human barricade to cordon off the store’s meat section.

Frustrated shoppers responded by hurling abuse towards the protesters and branded them ‘disgusting’ before demanding they leave the store. 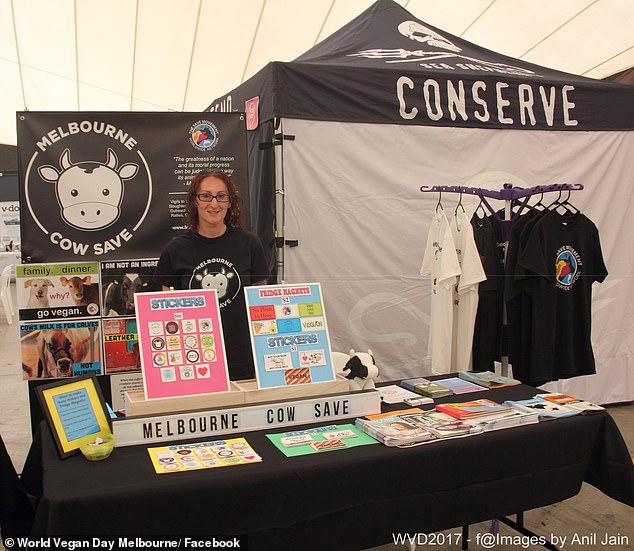 Natalie Cruz – who goes by the name Natalie Shanti – attends the counter at a vegan activist stall. She confided in a friend that she hadn’t been a real vegan 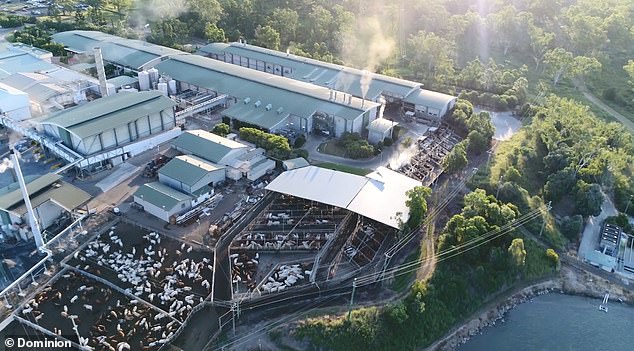 A scene from the controversial doco Dominion, which Natalie Cruz – who goes by the name Natalie Shanti – was credited as helping to make