‘My hope with having a show like #NandJByDesign on @TLC, where we go into people’s homes and welcome viewers into ours, is that we can start to break down barriers & normalize the way our family looks & the way our family loves,” Berkus wrote with the image that he shared on Friday night.

This came after the husband of a Duggar daughter launched an unprovoked attack on the two designers and the entire LGBTQ community while once again taking aim at TLC.

Dillard posted a number of comments on Twitter after coming across a post promoting the new reality series N and J by Design, which chronicles the life of the two gay interior design experts.

Reality star and father Nate Berkus (left) tweeted a People Magazine cover photo featuring his co-star husband Jeremiah Brent (right) and their two children, celebrating his modern family after former TLC personality Derick Dillard went on a homophobic rant directed at him; The two are shown here with their three-year-old daughter, Poppy, who is also on their show

‘My hope with having a show like #NandJByDesign on @TLC, where we go into people’s homes and welcome viewers into ours, is that we can start to break down barriers & normalize the way our family looks & the way our family loves,” Berkus wrote with the image that he shared on Friday night

The post that set Dillard off was accompanied by a photo of the men with their older child, three-year-old daughter Poppy, which prompted Dillard to write:

‘What a travesty of family. It’s sad how blatant the liberal agenda is, such that it both highlights and celebrates a lifestyle so degrading to children on public television as if it should be normal.’

Since the show taped, Berkus, 46, and Brent, 43 welcomed a new child into their family, a son named Oskar, one month ago. Berkus included a People Magazine cover photo of all four of them, together, in his response to Dillard’s verbal assault.

This is not the first time Dillard has bashed an openly gay reality star on social media, having gone after transgender teenager and TLC star Jazz Jennings as well on multiple occasions in the past. 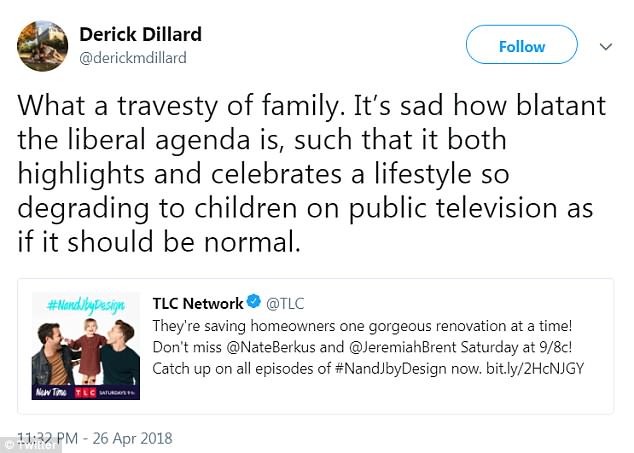 Religious write: ‘It’s sad how blatant the liberal agenda … celebrates a lifestyle so degrading to children on public television as if it should be normal,’ wrote Dillard (above) 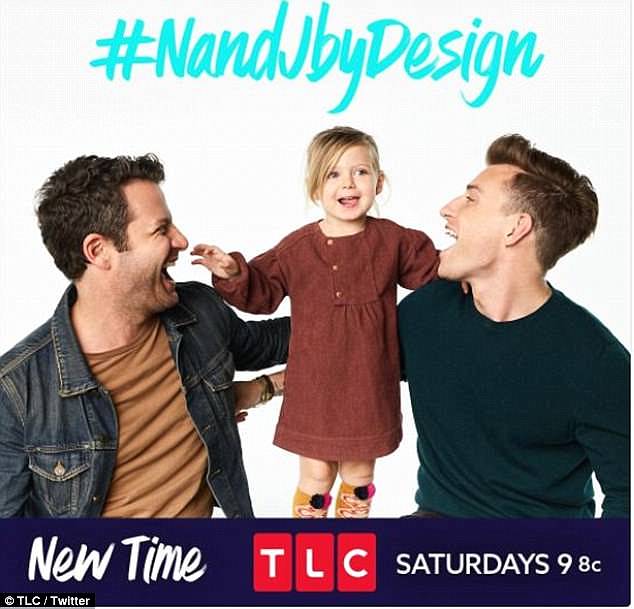 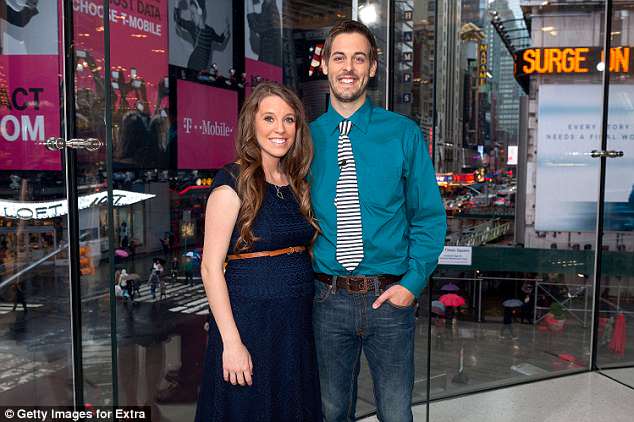 Back at it: Derrick Dillard criticized the new TLC reality show N and J By Design because it features a gay couple and their child (Derrick Dillard and wife Jill in 2014 above)

TLC refused to comment on those attacks at first, but eventually made the decision to remove Dillard from the Duggar family’s reality show.

When asked about Dillard’s latest attack on one of the network’s LGBTQ stars a TLC spokesperson had no comment.

Dillard shared some more of his thoughts in the comments section.

One woman asked Dillard what the point of the attack was given that Berkus’ lifestyle has no impact on how he leads his life.

‘They affect this poor child, as well as what perversions are celebrated,’ Dillard responded. ‘If it were adultery, I doubt a network would be so quick to focus on the reality of it as if it were OK.’

Another woman noted that she too is a Christian and was upset with Dillard’s post given that one of he basic tenets of their religion is to never judge another person or attack them because they believe they are a sinner.

‘I’m not bashing the people, I’m just calling out the public agenda at play and how a network chooses what they highlight,’ Dillard said.

‘Christians should love all as Christ loved all. Take advantage of capitalism: boycott what you don’t believe in, but don’t boycott relationships.’

There was also a young woman who fired off Bible verses which admonished Dillard’s actions, responding the the initial tweet by writing: ‘James 4:12, b****.’

This is the verse that asks: ‘Who are you to judge your neighbor?’

Dillard fired back by stating: ‘So I guess we shouldn’t have judges in our court system? Should we not be allowed to challenge what’s best for the welfare of children, especially when their guardian chooses to be in the public eye and put a child in the public eye?’

His well-versed counterpart was ready with a response as well, tweeting: ‘Bro, how do you feel about strangers judging your public eye family? Accusing you and your in-laws of abusing children? Matthew 7:2.’ 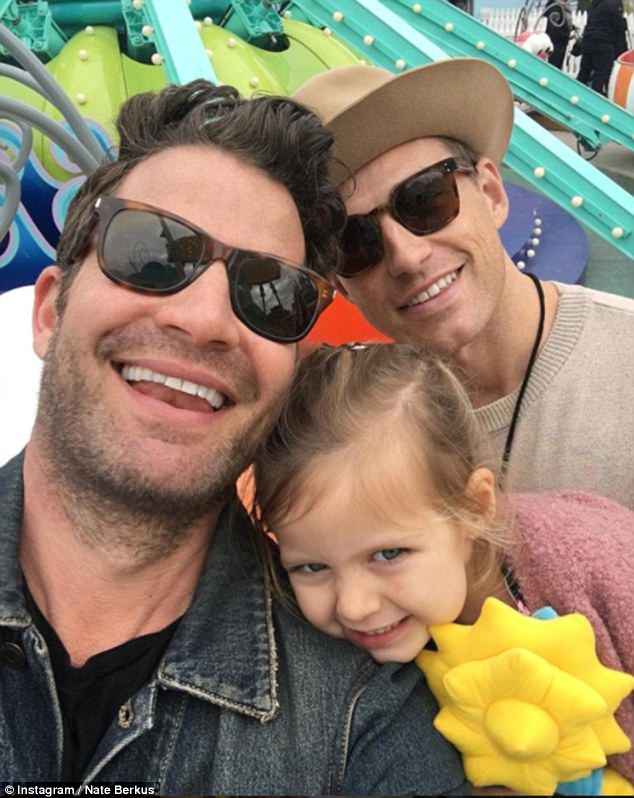 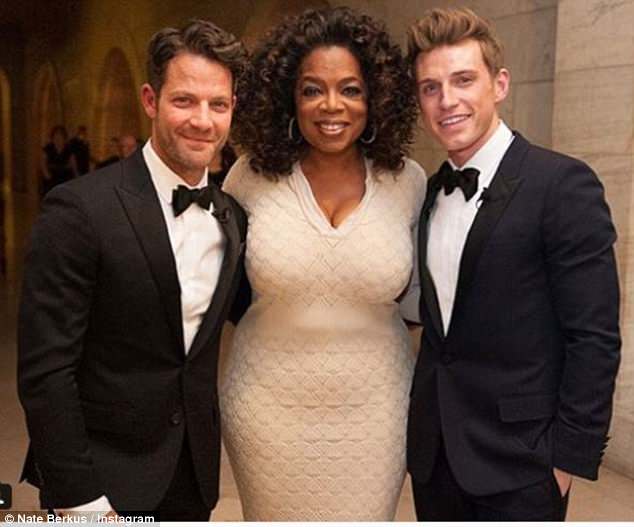 Op-nope: When asked about Dillard’s latest attack on one of the network’s LGBTQ stars a TLC spokesperson had no comment (Berkus and Brent with Oprah Winfrey)

Family also came up in another tweet, with one person asking: ‘Still waiting on your public comments denouncing and degrading Josh’s REPEATED actions just as much as you do everyone else. I want to see just as many posts from you about murderers, police brutality, infidelity, child molesters, etc. Why are homosexuals your pet project?’

In response to this, Dillard wrote: ‘Those things are already recognized evils among society, except the murder of the unborn, which is why I’m adamant about that issue as well.’

He then later explained that his main problem with homosexuality is the way that it is ‘celebrated’ by society.

It was not all negative responses however, with one follower tweeting: ‘Very true. Counting On needs to continue to show Godly living in a sinful world.’

To this Derrick replied: ‘Yes.’ Counting On is the name of the TLC show Dillard used to appear on. 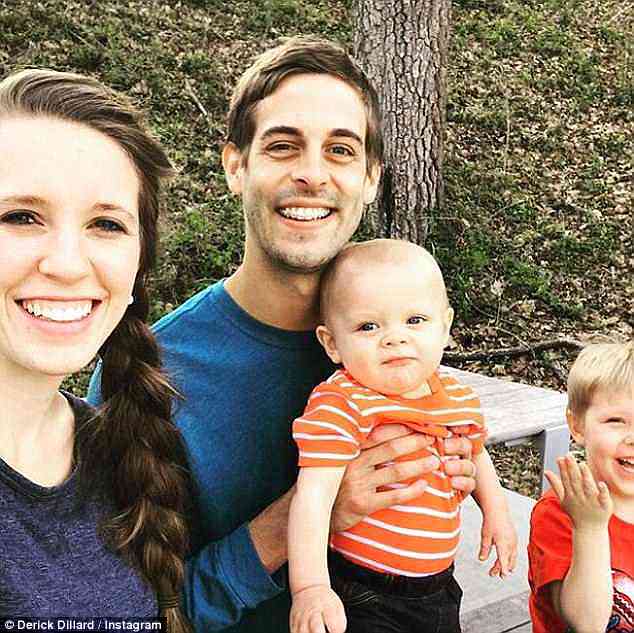 Dillard, who is married to Jill Duggar and has two children, left TLC around the same time he began frequently attacking transgender teen Jazz Jennings

‘I’m not bashing the people, I’m just calling out the public agenda at play and how a network chooses what they highlight,’ Dillard said

This latest incident began in a manner that was remarkably similar to Dillard’s past Twitter attacks.

Last August, an innocuous tweet from TLC on a Wednesday night that let their followers know a new episode of the program ‘I Am Jazz’ was about to begin managed to set Dillard off.

He quickly retweeted TLC, commenting: ‘What an oxymoron… a “reality” show which follows a non-reality. “Transgender” is a myth. Gender is not fluid; it’s ordained by God.’

Dillard was widely admonished in the wake of that tweet by both his religious and non-religious followers, and TLC was eventually forced to comment on the situation after refusing to speak about the subject throughout the day.

‘Derick Dillard’s personal statement does not represent the views of TLC,’ said the network.

Soon after he posted those comments on Twitter, one follower wrote: ‘Is it necessary for a grown man to throw shade at a teenage girl?’

Dillard then defended his actions, replying: ‘I want to be clear. I have nothing against him. I only have issue with the words and definitions being propagated here.’

These attacks on a minor teenager were not enough to get Dillard cut from the family show in August, but by November he and the network had parted ways, with Dillard claiming he left and TLC suggesting it was a network decision.

When one individual asked Dillard on Friday what he would do if one of his children were gay, the former reality star responded: ‘We’d love them just the same.’