Former Collingwood coach Nathan Buckley has called out Cats players for lying about what coach Chris Scott told them in an on-field huddle moments after their victory over GWS on Saturday.

When Geelong stars Tom Hawkins, Jeremy Cameron and Mitch Duncan were asked about what Scott said to the team, Hawkins and Cameron claimed they couldn’t recall, while Duncan said he wasn’t present.

And Buckley was having none of it.

‘I call bulls**t on them not knowing what their coach said,’ the Collingwood great said on Fox Footy.

‘I reckon you’re on to something, Browny [co-commentator Johnathan Brown], he would’ve said, ‘You’re gonna get asked questions about this. We aren’t going to go there.”

Geelong won 88-35 in a dominant performance that was credited to a changed playing style to the one seen in the first seven rounds of the competition.

In those matches the Cats played a more expansive brand of footy, but on Saturday they reverted back to the safer structure they’ve become known for, with more emphasis on possession rather than scoring. 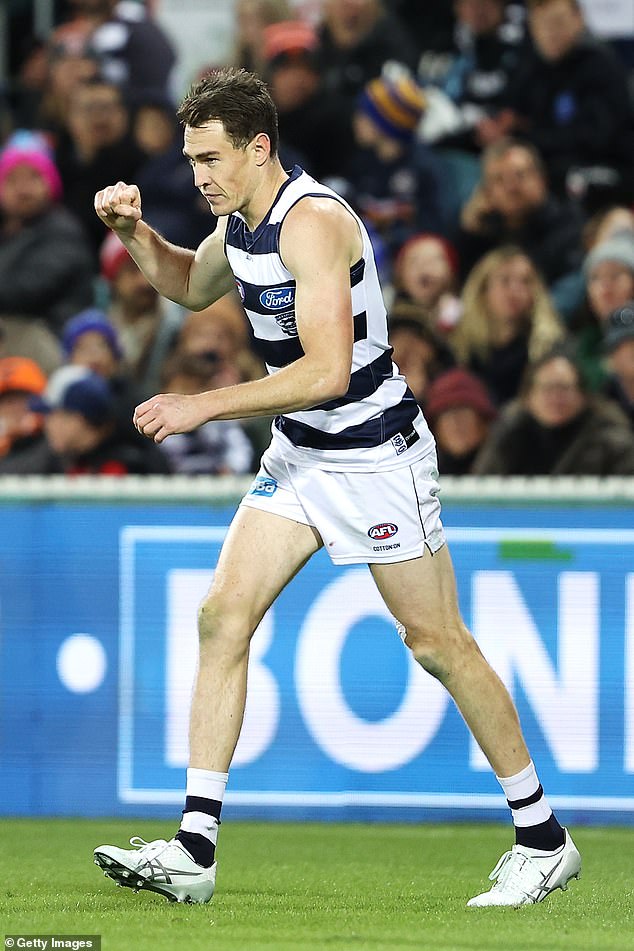 After the game coach Chris Scott summoned his side in for a quick debrief, with players somehow forgetting the entire speech just minutes later.

‘What did he [Scott] say to you just then when he pulled you guys all together?’ former Hawthorn star Ben Dixon asked.

‘If I’m being totally honest I’m not sure,’ said Jeremy Cameron.

‘I was actually giving a ball to a kid so I didn’t hear it either,’ Mitch Duncan laughed.

Buckley believes Scott  told players not to talk to the media about the switch in playing style.

The coach discussed the chances of the Cats moving away from their conservative tactics back in February as he reacted to criticism that while the game plan worked well during the regular season, it needed to change if the team was to break through for another grand final win.