The glamorous blonde, 29, was spotted flashing what appeared to be an engagement ring as she watched her 33-year-old beau play his 100th test match at the Gabba in Queensland on Saturday.

Nathan debuted his relationship with Emma in 2017, shortly after his messy split with ex-wife Mel Waring rocked the cricket community.

Ring-a-ding-ding! Cricketer Nathan Lyon’s girlfriend Emma McCarthy. 29, (pictured) was spotted flashing what appeared to be an engagement ring as she watched him play his 100th game at the Gabba on Saturday.

Nathan and Mel split after the sportsman was caught kissing Emma in late 2017 in Perth while he was still with Mel.

She detailed their heart-breaking split in a post on her blog, Life of Lyons, in March 2018.

The single mother said her pain was ‘real and deep’ and she recounted nights when she would lie in bed with her children and cry. 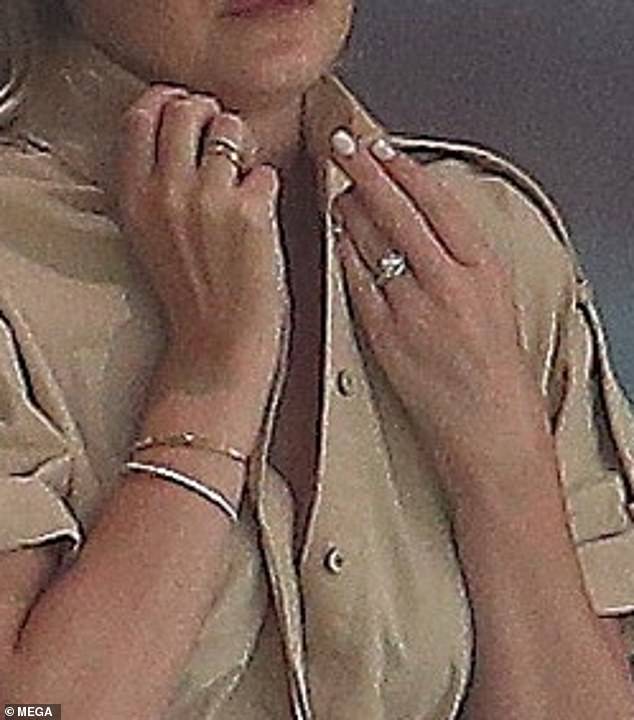 What a rock! Emma proudly wore the weighty diamond sparkler as she cheered on her beau from the grandstands

‘I didn’t ask for this, this wasn’t the way my life was supposed to be. He was my forever, he was my whole world,’ she wrote.

‘Until the very end I was 100 per cent devoted to our life and I loved every part of him and our world. This was like a bomb, it went off from behind.

‘I had to deal with [it] in a very public, humiliating and confronting way. A part of me died.’