A moonstruck nation celebrated the 50th anniversary of humanity’s first footsteps on another world Saturday, gathering in record heat at races and other festivities to commemorate Apollo 11’s ‘giant leap’ by Neil Armstrong and Buzz Aldrin.

Nostalgia is rife among some of those celebrating, with many sharing anecdotes and memories online of their first impressions watching Neil Armstrong bound along the lunar surface for the first time.

And now, NASA astronaut Stan Love has insisted it won’t be long before we see the incredible feat replicated once more, pledging that the US will ‘absolutely’ be able to land on the moon again by 2024.

NASA astronaut Stan Love has insisted it won’t be long before we see the incredible feat replicated once more, pledging that the US will ‘absolutely’ be able to land on the moon again by 2024 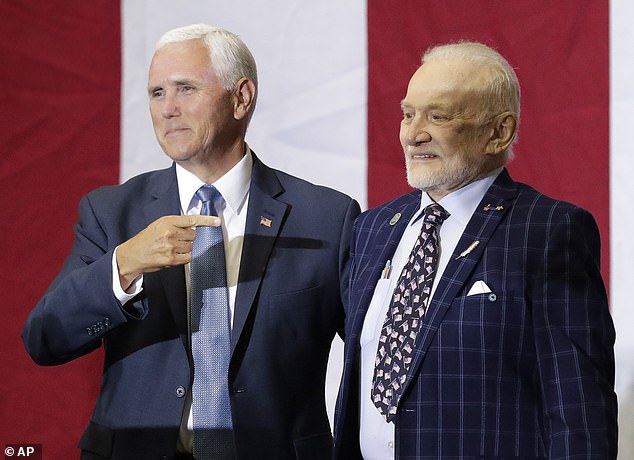 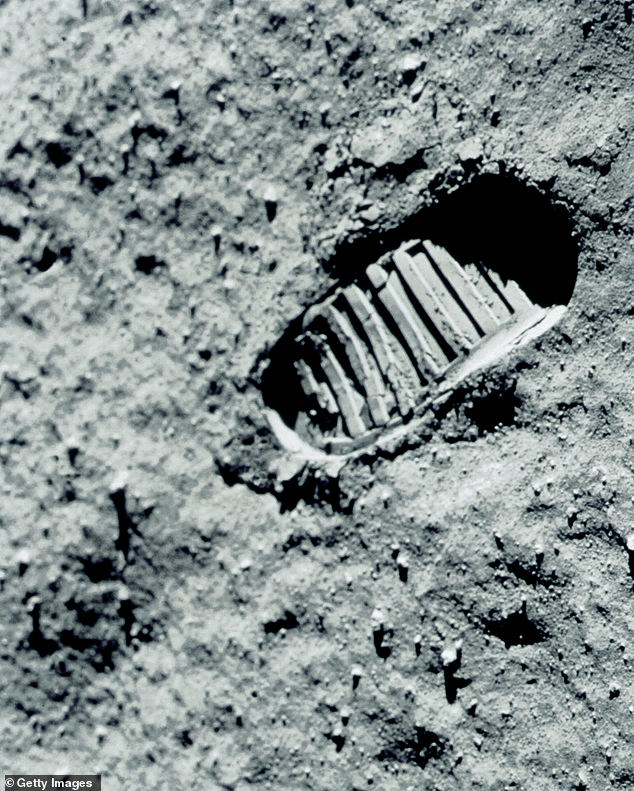 Neil Armstrong became the first man to ever step foot on the moon, quipping the famous line ‘One small step for man, one giant leap for mankind’ as he bound his way across the lunar desert 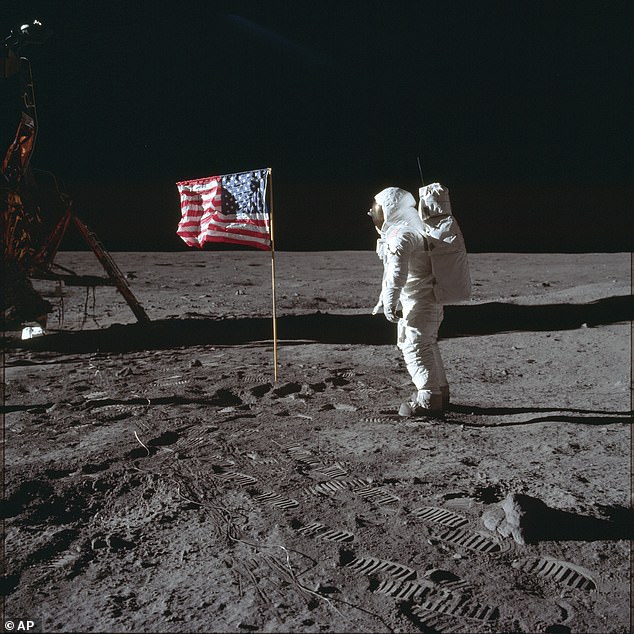 The Trump-backed Artemis program will seek to establish a sustainable human presence on Earth’s natural satellite. The project will also make history of its own by landing the first woman on the moon.

‘The moon landing is the next logical step,’ Love said in an interview with America’s News HQ, commemorating five decades since the moon landing.

At the same time halfway around the world, an American and two other astronauts blasted into space from Kazakhstan on a Russian rocket.

And in Neil Armstrong’s hometown of Wapakoneta, Ohio, nearly 2,000 runners competed in ‘Run to the Moon’ races. 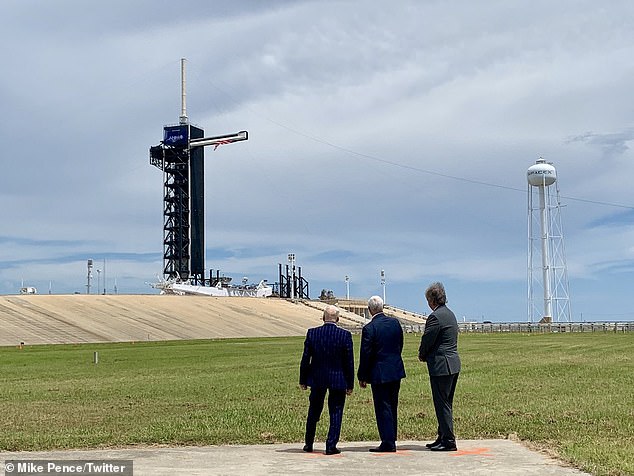 Aldrin (left) showed Vice President Mike Pence (center) the launch pad where he flew to the moon in 1969. At the same time halfway around the world, an American and two other astronauts blasted into space from Kazakhstan on a Russian rocket 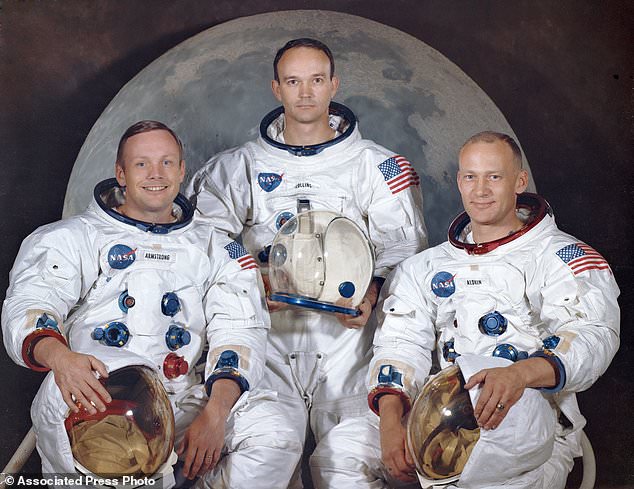 ‘We’re celebrating the 50th anniversary of perhaps the most historic event in my lifetime, maybe in anybody’s lifetime, the landing on the moon,’ said 10K runner Robert Rocco, 54, of Centerville, Ohio.

‘The ’60s were very turbulent. But that one bright wonderful moment was the space program.’

Four days after Apollo 11 blasted out from the John F. Kennedy Space Center, the spacecraft’s Eagle module – carrying Armstrong and Aldrin – was running drastically low on fuel and urgently needed to land on the moon’s surface.

The module’s autopilot mode had overshot the desired landing zone by some four miles, leaving the two men hurtling towards a crater filled with rocks and jagged terrain for what sure would’ve made for a fatal crash landing.

With the success of the mission literally in his hands, Armstrong switched off the Eagle’s autopilot mode and took manual control of its reigns.

Despite his heart-rate measuring at an erratic 150 BPM, Armstrong kept a cool head and a steady hand, guiding the Eagle away from the crater.

With just 17 seconds of fuel remaining, incredibly Armstrong was able to bring the Eagle in for landing on a smooth, flat patch of the moon’s surface, later dubbed the Sea of Tranquility.

The mission’s success held true on President John F. Kennedy’s pledge to land an American on the moon by the end of the decade, beating the Russians to the feat.

Armstrong was the first one to step out from the Eagle, coining the now iconic phrase: ‘That’s one small step for man, one giant leap for mankind.’

Reflecting on one of modern history’s most incredible moments, President Dona;d Trump said: ‘Few moments in our American story spark more pride than the Apollo 11 mission,’ in a Space Exploration Day message.

His statement reiterated the goal of sending astronauts back to the moon within five years and taking ‘the next giant leap – sending Americans to Mars.’ 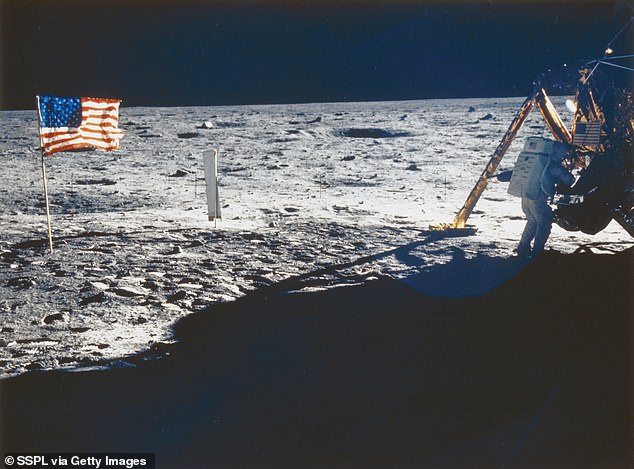 The Eagle lunar lander, carrying Armstrong and Aldrin, landed on the Sea of Tranquility on July 20, 1969 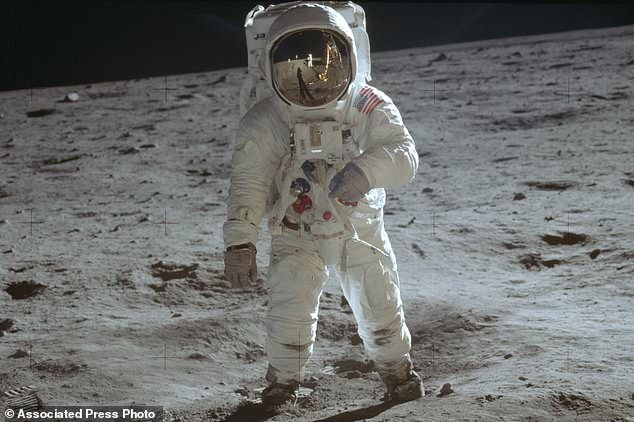 The mission’s success held true on President John F. Kennedy’s pledge to land an American on the moon by the end of the decade, beating the Russians to the feat 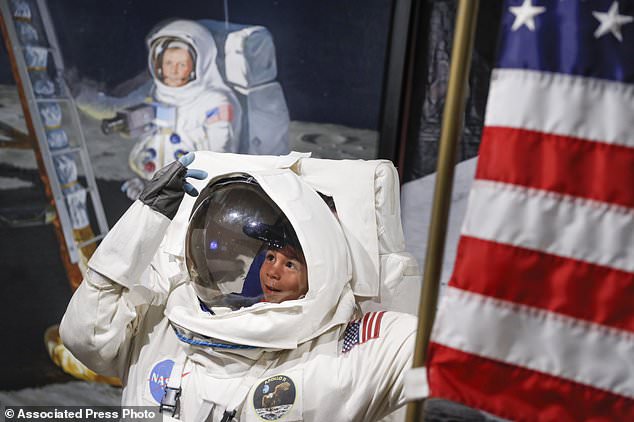 Visitors pose for photos beside a portrait of Neil Armstrong at the Armstrong Air & Space Museum, replicating one of modern history’s most iconic moments 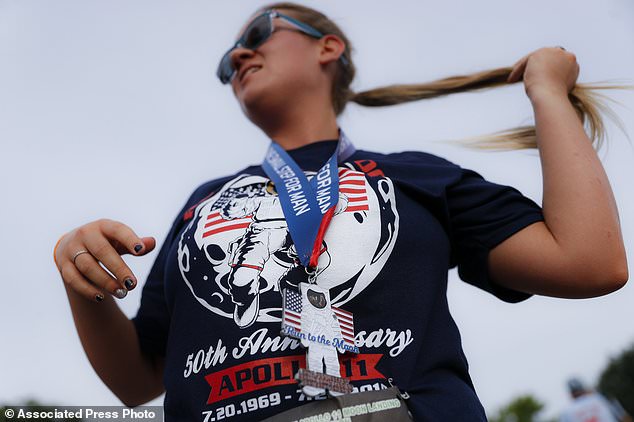 In Neil Armstrong’s hometown of Wapakoneta, Ohio, nearly 2,000 runners competed in ‘Run to the Moon’ races. One participant is pictured with her medal

Both astronauts and the Armstrong family met with Trump in the Oval Office on Friday, with Collins pushing for a direct mission to Mars and skipping the moon, and Aldrin expressing dismay at the past few decades of human space exploration.

On Saturday, Pence, Aldrin and Armstrong’s older son, Rick, visited the Apollo 11 launch pad, now leased by SpaceX, and the building now named for Armstrong where the astronauts suited up for lift-off on July 16, 1969.

In New York City, organizers moved a moon-landing party from Times Square into a hotel because of the heat wave. Youngsters joined former space shuttle astronaut Winston Scott there, as a giant screen showed the Saturn V rocket lifting off with the Apollo 11 crew in 1969. 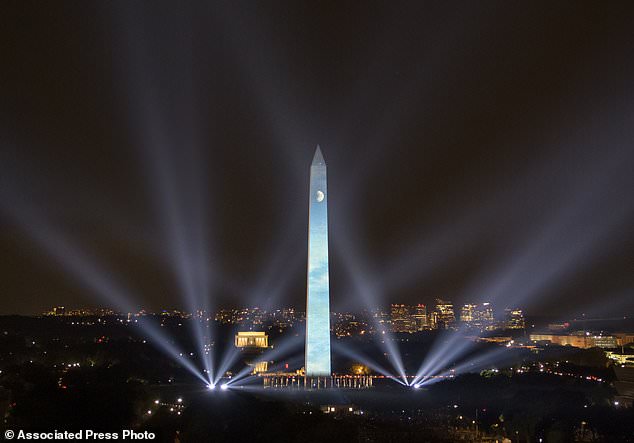 A 17-minute show, ‘Apollo 50: Go for the Moon’ took place in Washington on Friday night, which combined full-motion projection-mapping artwork on the Washington Monument and archival footage to recreate the launch of Apollo 11 and tell the story of the first moon landing 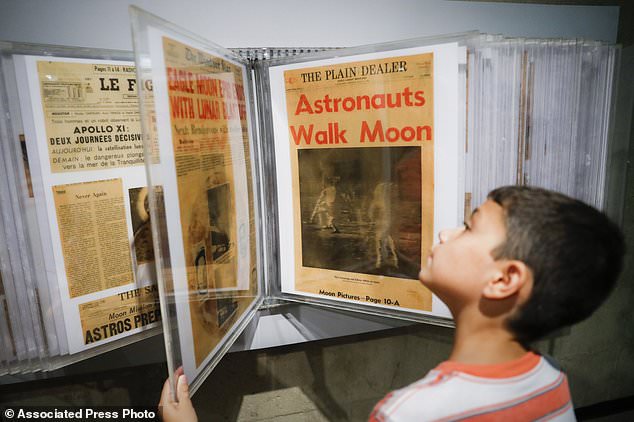 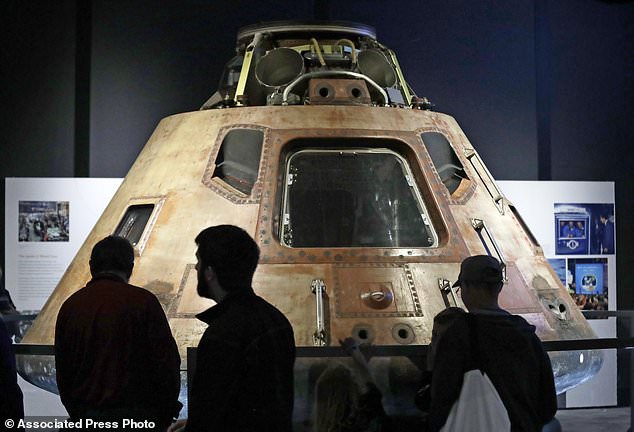 Visitors look at the NASA Apollo 11 command module Columbia, the centerpiece of Destination Moon: The Apollo 11 Mission exhibit at the Museum of Flight, Friday, July 19, 2019, in Seattle. The module functioned as a mother ship, carrying the crew of three astronauts and the second Apollo spacecraft, the lunar module, to orbit around the moon, and brought the astronauts back to Earth

Across the country in Seattle, Tim Turner was first in line at the Museum of Flight to see the Apollo 11 command module, Columbia, on display there. Collins orbited the moon alone in Columbia, as Armstrong and Aldrin descended to the gray, desolate surface.

Turner, who drove 75 miles from his home in Poulsbo, Washington, recalled watching the lunar landing on his family’s black-and-white TV in Tennessee, then going outside to gaze at the moon.

‘There was just excitement,’ Turner said. ‘It was just the novelty of it all. Good grief! It’s still amazing, the No. 1 feat of the 20th century, if not all of modern history, that first time there.’ 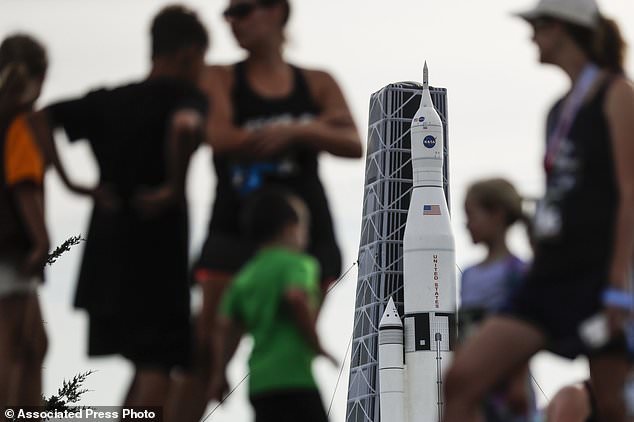 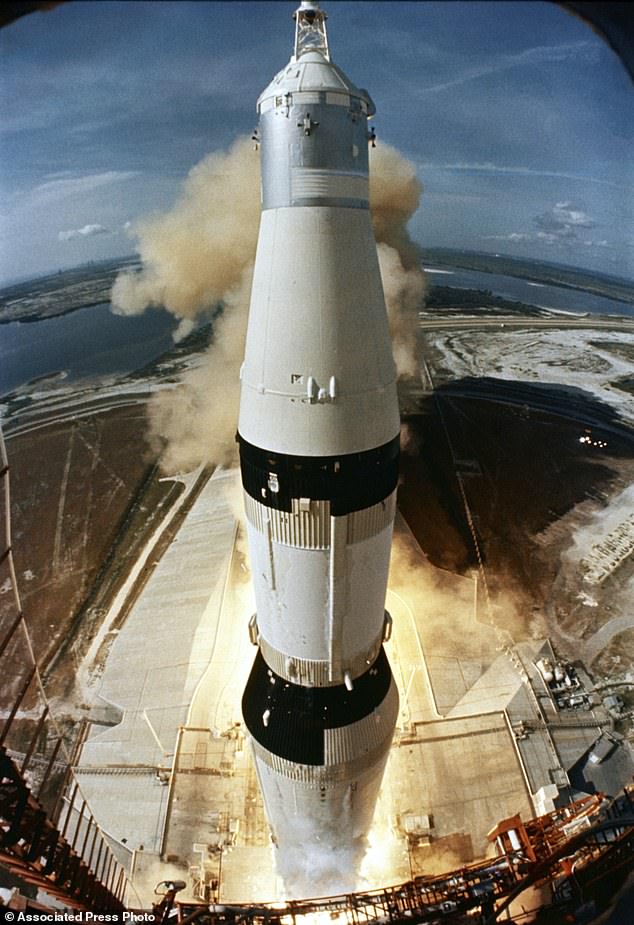 In this July 16, 1969 photo the 363-feet Saturn V rocket carrying the Apollo 11 crew, launches from Pad A, Launch Complex 39, at the Kennedy Space Center in Florida

Countdowns were planned across the country later in the day at the exact moment of the Eagle’s landing on the moon – 4:17 p.m. EDT – and Armstrong’s momentous step onto the lunar surface at 10:56 p.m. EDT.

The powdered orange drink Tang was back in vogue for the toasts, along with MoonPies, including a 55-pound, 45,000-calorie MoonPie at Kennedy’s One Giant Leap bash.

In the 100-degree heat of Kazakhstan, an American, Italian and Russian, rocketed into the night to the International Space Station.

Only one of the three – cosmonaut Alexander Skvortsov – was alive at the time of Apollo 11. The three already living on the space station also were born long after the moon landings.

The crew deliberately modeled its mission patch after Apollo 11’s: no astronaut names included to show the universal nature of space flight.

Morgan explained in a NASA interview that Apollo 11, and now his flight, represents ‘an accomplishment of the world and not one single country.’