National Association of Police Organizations has endorsed President Donald Trump in the 2020 presidential election, citing his ‘steadfast’ support for law enforcement in a climate of anti-police protests.

NAPO President Michael McHale announced the endorsement in a public letter to Trump on Wednesday, after leaders of the group met with the president on Monday.

‘Our endorsement recognizes your steadfast and very public support for our men and women on the front lines, especially during this time of unfair and inaccurate opprobrium being directed at our members by so many,’ the letter read.

‘We particularly value your directing the Attorney General to aggressively prosecute those who attack our officers,’ he wrote. 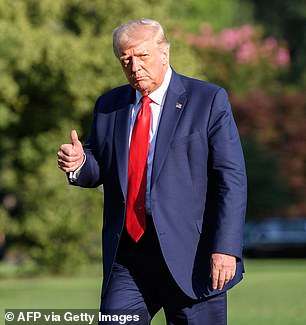 NAPO President Michael McHale (left) announced the endorsement in a public letter to Trump on Wednesday, after leaders of the group met with the president on Monday

The NAPO is an umbrella group representing more than 1,000 police associations and 241,000 sworn officers nationwide.

The group declined to endorse a candidate in the 2016 presidential election.

Trump has made ‘law and order’ a signature issue of his campaign, as calls mount to defund police departments and protests over the in-custody death of George Floyd have spilled into violence nationwide. 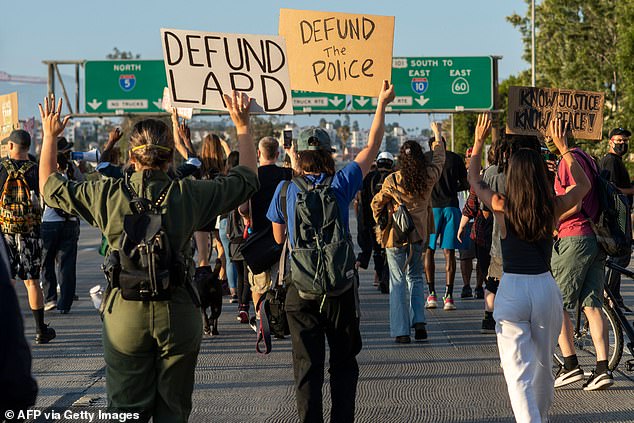 In footage of the incident tweeted by the NYPD Wednesday, a protester is seen swinging a long object down at the heads of a group of officers from a pedestrian walkway as they attempt to arrest someone at 10am.

Police photos of the aftermath showed a lieutenant with a bloodied face, a detective holding a bandage to his head, and a bicycle officer helping other officer dress a head wound. Their injuries are all said to be serious.

Monahan meanwhile, who is seen the video dressed in a white shirt, suffered a fractured his finger in the scuffle and other minor injuries, officials said.