National Crime Agency clears Leave.EU and Arron Banks after finding ‘no evidence that any criminal offences have been committed’

By Joe Middleton and David Wilcock, Whitehall Correspondent For Mailonline

The National Crime Agency (NCA) has said it has found ‘no evidence that any criminal offences have been committed’ after the Electoral Commission referred allegations against Leave.EU and businessman Arron Banks.

Britain’s FBI accepted a referral from the Electoral Commission of a number of alleged offences against Leave.EU, its chief executive Elizabeth Bilney, businessman Arron Banks and a company called Better for the Country Ltd.

It claimed that Mr Banks was not the true source of £8 million in loans, and that the company through which they were made, the Isle of Man registered Rock Holdings Ltd, should not have been used to make donations because it is registered outside the UK.

But, in a statement the NCA said it had ‘found no evidence that any criminal offences have been committed under PPERA or company law by any of the individuals or organisations referred to it by the Electoral Commission.

‘It will therefore take no further action against Mr Banks, Ms Bilney, Better for the Country Ltd or Leave.EU in respect of this specific matter’.

Banks, nicknamed the ‘Bad boy of Brexit’, has been dogged by claims he was backed by the Kremlin to help bring about the UK’s divorce from the EU – but he has repeatedly branded it ‘b*****s’.

After the announcement he tweeted ‘victory is sweet’ and said he would tack legal action against the Electoral Commission and Remainers over what he claimed was a ‘political witch-hunt led by anti-Brexit MPs’.

Banks, nicknamed the ‘Bad boy of Brexit ‘, has been dogged by claims he was backed by the Kremlin to help bring about the UK’s divorce from the EU – but he has repeatedly branded it ‘b*****s’ 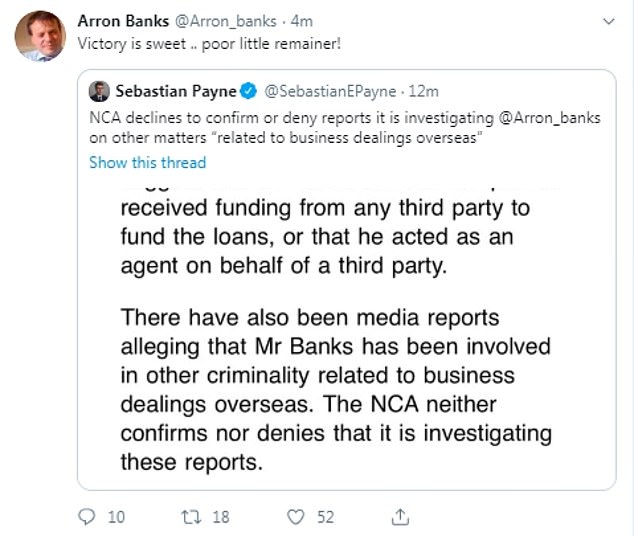 He added: ‘No overseas money was used in the Brexit campaign, it was my money.

‘We intend to issue a claim against the EC for the decision to refer this matter to the publicly. We calculate the losses well over £10million.’

Ms Bilney accused the Electoral Commission of being ‘biased’.

He said: ‘The appalling establishment campaign against Mr Banks must now end. Heads must roll – beginning with the Electoral Commission who, without evidence, suggested that criminal offences may have been committed. Disgusting.’

The Electoral Commission has said the Leave.EU case highlighted an ‘apparent weakness’ in the law which allowed foreign money into British politics. 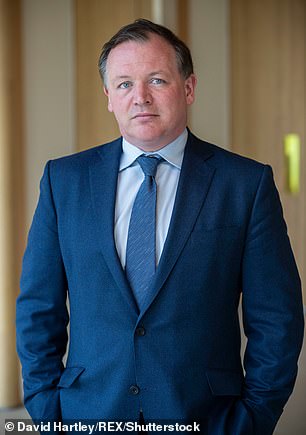 ‘We are concerned about the apparent weakness in the law, highlighted by this investigation outcome, which allows overseas funds into UK politics,’ a commission spokesman said.

‘Significant sums were spent on campaigning at the 2016 EU referendum and it is vital that voters have transparency over the way these campaigns were funded.

‘It is therefore right that suspected offences are investigated by the appropriate authorities, as the NCA has done in this case.’

Earlier this month the Metropolitan Police found that the Leave.EU campaign committed technical breaches of electoral law over its EU referendum spending return, but would face no further action.

The Electoral Commission referred the campaign to police over its spending during the 2016 poll and fined it a record-equalling £70,000.

The National Crime Agency added: ‘There have also been media reports alleging that Mr Banks has been involved in other criminality related to business dealings overseas.

The NCA neither confirms nor denies that it is investigating these reports.’