National Express has bounced back to profit as the gradual unwinding of travel restrictions generated a resurgence in bus and coach passengers.

The transport company posted a £15.8million profit for the first half of 2022, against a £24.1million loss last year when many services were suspended after countries imposed tough nationwide lockdowns.

Demand was further impacted by a growing cautiousness among people about travelling on public transport due to worries about being infected with coronavirus, prompting some to use their cars more often.

Recovery: National Express posted a £15.8million profit for the first half of 2022, against a £24.1million loss last year when many services were suspended

As these fears and restrictions have subsided, the group has seen a considerable recovery in passenger numbers, though this was somewhat slowed by the spread of the Omicron variant.

However, total half-year revenues expanded at their fastest rate in over a decade, jumping by a third against the same time last year to £1.32billion.

Just under half the rise in sales derived from the firm’s Spanish subsidiary ALSA, which benefited from record ridership volumes in Morocco and the strong popularity of long-haul routes.

This helped the segment’s underlying operating profit almost treble to €59.7million, only 9 per cent less than 2021 earnings.

By comparison, the company made a loss from its UK business despite coach revenues accelerating by 359 per cent thanks to a boom in demand for intercity travel and airport transfer services.

The division still managed to turn a profit in the second quarter after passenger levels shot up from March, subsequently reaching exceptionally high levels during the Platinum Jubilee celebrations and Glastonbury Festival. 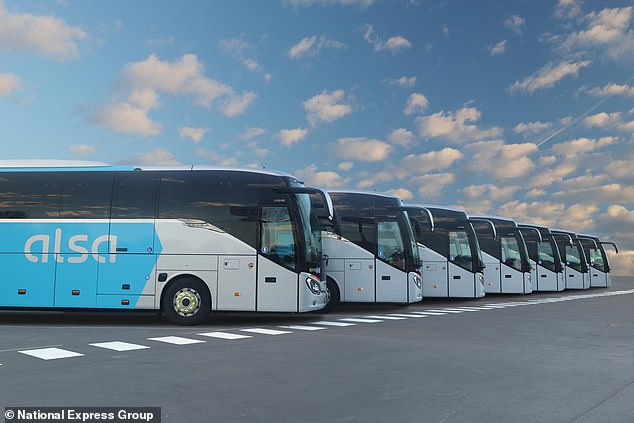 National Express predicts further growth from British coach travel this year, while over the medium term, it thinks the cost-of-living crisis could persuade more Britons to take bus journeys.

It also expects to gain another £150million in income from the 16 contracts it acquired in the first half of the period, half of which are within its North American shuttle business.

Revenues from its shuttle services surpassed pre-pandemic levels after growing by 28 per cent, 20 percentage points higher than at its school bus arm, which was impacted by driver shortages, leaving some contracted routes inoperational.

Chief executive Ignacio Garat said the company is ‘taking all the steps we can to mitigate the industry-wide shortage,’ with average salaries being hiked by up to 12 per cent for the upcoming school year.

National Express does expect the hike in wage costs to be offset by the renewal of contracts and filling of driver vacancies, yet it warned that margins in its North American business are anticipated to drop in 2023.

Nonetheless, the significant recovery in demand, contract wins, and potential contract gains worth more than £2billion has led the transport operator to uphold full-year guidance, with its UK division expected to post positive earnings.

Garat added: ‘The path ahead will not be without challenges. We believe, however, that we are well positioned in an inflationary environment, resilient to slowing economic growth.’

National Express shares were up 1.6 per cent to 181.9p on late Thursday afternoon, although their value has dropped by over 27 per cent in the past six months.