The word stereotype was first introduced as a modern phenomenon by a political correspondent, Walter Lipman in 1922. It was a way of describing something en masse as a characteristic or typical way to be, either in a positive or negative manner.

One of the most popular cliches connected with this mass-perceived belief system is ‘only in insert country/city here’, meaning that a particular place is unique in its own prejudiced or playful way when, in fact, the same thing probably happens in every country around the world.

Stereotypes still have a huge impact on everyday social life and commercial interpretations along with the advertising environment.

Some quickfire well-known and over-used stereotype instances are; The French are good cooks and romantic but the Italians eat well, even the Mafia, the Germans are beer drinkers but sell quality cars, the British drink tea at 5 pm along with the hooligans and the Polish drink vodka but have great plumbers.

All of these stereotypes are assumed and may or may not be true, positive or negative but are forever referred to in certain arguments.

Here are 10 examples of stereotyping when different nationalities go abroad:

Britain & British – The Brits abroad gather some odd looks and reactions from the locals when they ask for tea with milk and are easily identified in sunny climates because they all become lobster red, painfully sunburnt.

Still, to this day, English football fans create panic when abroad with the stigma of being hooligans. The British attitude towards sex and no touching or invading personal space is often associated with being British.

The Brits always say sorry a million times even if it is not their fault.

Obviously, also when you see a bunch of lads being loud and cheerful at the bar, especially wearing fancy clothes, many people naturally assume it’s “Brits on a stag do”, while places such as e.g. Krakow in Poland, receive a fair amount of stag goers from the other countries as well such as e.g.: Netherlands, Norway, France or even “stiff Germany”. 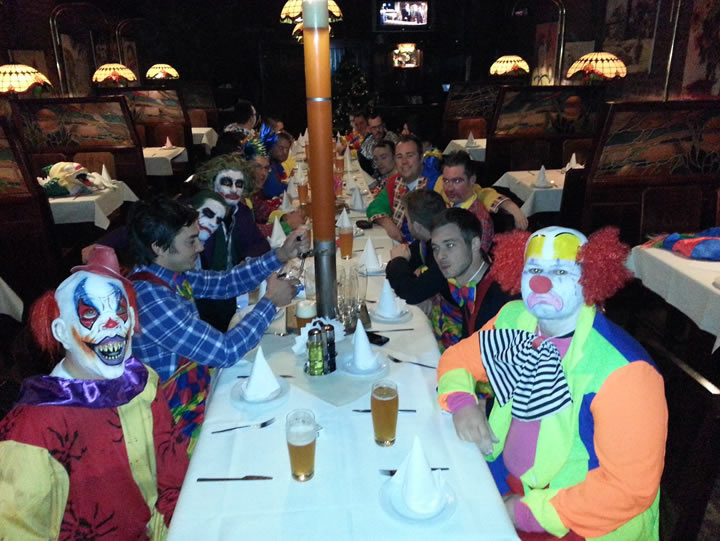 Krakow stag do – courtesy of PartyKrakow

Poland & Polish – Jesus boots & socks while on holiday and not only, wearing ankle socks with summer sandals even in winter will get you tagged as you’re from Poland, especially if you have a bag of sausages, a loaf of bread, and go mushroom picking.

While abroad, the Poles smile a lot but at home, they are complaining about everything.

Italy & Italians – Obsessed with eating and will go to great lengths to find a suitable Italian-ish restaurant or end up in a fast food venue in desperation.

Brightly colored designer clothing and extremely loud in conversation which is conducted with many hand gestures, Italians are so easy to pick out when abroad, also, renowned for not being able to speak another language, although not as bad as the Brits.

Spain & Spanish – The Spanish are even louder than Italians when speaking because they drink more than Italians and are blessed with the title of Latin Lover but terrible dancers, apparently.

Germany & Germans – A methodical and organized reputation precedes them when abroad, one nominated person is always early to the pool to claim all the best sunbeds and places if in a group and the activities planned a year ago are put into practice.

Huge consumers of beer just like the Brits when abroad but lack a sense of humor and funnily enough they, like the Poles, are prone to the summer sandals and socks stereotypical image but with a knee-high long sock in 30◦c plus.

France & French – A beret, a striped t-shirt, and a necklace of garlic is the mental image of a French person, some stag or sports groups may use this as a theme on tour plus an accordion player, of course, but most all is the rivalry with other nations, especially the Brits.

However, the positive stereotype is the wine, the French are wine drinkers extraordinaire.

America & Americans – The Americans and their obsession with guns, very little understanding geographically of Europe, as the Czech Ambassador had to explain to Americans that Chechnya is not the Czech Republic during the attacks. Americans are loud too, and always say God Bless America in conversation.

Japan & Japanese – Polite to the point of being too polite or Samurai assassins and can hold a grudge for decades. Always quiet and calm but forever taking pictures to then manufacture the products present in them.

The students are the most studious and everybody eats sushi all the time, all common stereotypes of which some are true.

Russia & Russians – Like the Polish, Russians are perceived as great vodka drinkers but they are not all communists as one may think. Russians abroad are presumed privileged, spies or oligarchs and they don’t buy Levi’s Jeans to sell on the black market, well, not anymore.

China & Chinese – If you are looking for pseudo brands like Bendi, Dakost or Bolex then talk to a Chinese person abroad, they will be wearing these similar items to the real thing that is almost a copy of the famous brand.

Chinese people revel in this form of presenting themselves in pseudo brands. Bad manners are also a negative common observation expressed by the host countries.

We have glossed over some common aspects of stereotypes when abroad and how other nations perceive and see each other, however, stereotyping goes deeper and spills into further groups, not just nations.

Every country has its own internal stereotypes such as the UK saying that Scottish folk is tight with money, whereas in Italy the same assumption is with people from Genoa and in Poland, people from Krakow do not like spending money.

The worldwide ongoing battle of the sexes is universal with the formidable mother-in-law stereotype labels and jokes everywhere.

In the UK it is common to hear sentences like, ‘that’s typical of the French if there is some kind of incident and the majority of Poles have a negative opinion of Russians. Further stereotype groups include gender, boys are blue and girls are pink.

Stereotyping has deep roots and reflects various histories which stand the test of time, probably because there is or was a grain of truth involved initially and has remained in the minds of people and culture, hence the mind’s eye images that are conjured up even if you have never met someone or been to that person’s country.

What do you immediately think when a new acquaintance reveals that he, she, or they are vegan? Yes, interesting isn’t it?