By Tom Rawstorne for the Daily Mail

The National Trust is today throwing its weight behind the Daily Mail’s drive for a greener Britain by offering free entry to five historic locations around the country to plant trees.

In support of our Be A Tree Angel campaign, Europe’s largest conservation charity has invited Daily Mail readers to take part in tree plantings – saving up to £20 on entrance prices.

The trust looks after around 12million trees and nearly half of the woodland in its care is ‘ancient’ – from 1600 or earlier.

The National Trust is today throwing its weight behind the Daily Mail’s drive for a greener Britain by offering free entry to five historic locations around the country to plant trees (Pictured: Clumber Park in Nottinghamshire)

These trees create crucial habitats for wildlife as well as being a key part of our forest heritage.

But Britain has lost almost half of its ancient woodland since the 1930s. The trust is working to reverse the decline by planting new native woodland trees.

Go into orb-it in the forest

If you go down to these woods today, you’re sure of a very big surprise.

The National Trust has put up these ‘spaceage’ orb tents among the trees at Low Wray beside Lake Windermere.

Suspended 20ft above the ground, the £100-a-night tents hold the weight of three adults. 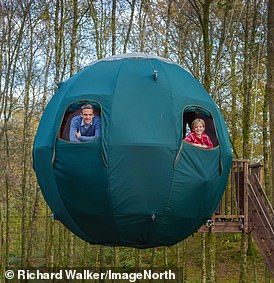 He said: ‘There’s something special – thrillingly elemental – about taking residence in a wood.

‘There’s a cacophony of night-time noises. When Martha asks what it might be, I say foxes, deer, or badgers. But rather than feel afraid, she seems energised to be up here safe and yet so close to nature.

‘We both fall asleep, warm and content, rocking gently in our lofty home.’

Luke Barley, of the charity, said: ‘Today our woodlands are at risk from climate change and an increasing number of pests and diseases.

‘Some of our most revered native trees such as ash and oak are suffering.

‘That’s why planting and caring for trees through the Be A Tree Angel campaign, and through our own work, is so vital.’

Trust colleague Carl Greenman said the move came as it worked to help families and children to re-connect with nature.

He explained: ‘Trees have such a sense of wonder for children.

‘We know that if children connect with nature early they are more likely to care for it as they grow up so it’s great to develop a child’s interest in plants and trees.’

As well as playing a crucial role in the fight against climate change, the charity’s 25,000 hectares of woodland – the equivalent of 30,000 football pitches – have provided an adventure playground for the nation for decades.

Tree camps, rope swings, Pooh sticks – aren’t those the memories from childhood we treasure the most?

But experts warn many children are missing out on these today.

Studies have found that only one in five children have a ‘connection to nature’ with time spent playing outside halving in a generation.

A 2017 survey by the trust found that today’s children spend an average of just an hour and 20 minutes outside each day – compared to two hours and 40 minutes for their parents and three and a half hours for their grandparents.

With its unique portfolio of properties and land across the country, the trust is playing a crucial part in helping children – and their parents – get back to nature.

Join the FREE fun at these five locations

Come along to Arlington Court on the edge of Exmoor in Devon on December 7 to celebrate 70 years in the National Trust’s care by lending a hand to plant 700 trees. The house was built in 1823 but it’s the grounds visitors really love, from the formal Victorian gardens to the lakeside walk and ancient heronry.

Quarry Bank, a cotton mill in Wilmslow, Cheshire, was once at the forefront of the industrial revolution. But now it needs your help to embrace a green revolution. Join rangers on December 19 or January 12 to plant trees to make this industrial heritage site leafier for the future.

Visitors can travel back in time to experience the two very different worlds of owner and worker when the mill was at its height of production. And you can imagine a future where nature has the upper hand.

Join National Trust rangers planting trees in the magnificent grounds of Clumber Park in Nottinghamshire between 1pm and 3pm on December 14 and 15. Clumber was once the country estate of the Dukes of Newcastle. Although the house was demolished in 1938, the Gothic-style chapel – often described as a ‘cathedral in miniature’ – and the walled kitchen gardens are still preserved in 3,800 acres of parkland and gardens.

Get digging to make room for new trees at a planting event on December 16 from 11am in the lush countryside surrounding Frog Firle Farm in the Cuckmere Valley, East Sussex. This haven for wildlife and wild flowers has fantastic views of the Seven Sisters chalk cliffs on the South Downs.

Patterson’s Spade Mill in Ballyclare, County Antrim, may have the right tools for tree-planting – spades have been made here since 1695 – but it still needs the people power for a planting on December 12 from 11am.

A limited number of free places are available. You need to be 18 to book but children are welcome if accompanied by an adult. Maximum of five people per booking. For more information, go to beatreeangel.co.uk