By Fran Ivens For This Is Money

House price growth slowed to just 4.4 per cent in November, down from annual property inflation of 7.2 per cent the month before, according to the latest Nationwide House Price Index.

The huge jump in mortgage rates after Kwasi Kwarteng’s ill-received mini-Budget, slammed the brakes on the property market and between October and November house prices fell by almost £4,500

This 1.4 per cent decline was the largest monthly fall since June 2020 and more than the 0.9 per cent fall recorded between September and October.

Nationwide: Year-on-year house price growth dropped to 4.4% in November, down from 7.2% in October

After the mini-Budget, mortgage lenders pulled their top deals en-masse and repriced those that were left, with average two and five-year fixes climbing above 6.5 per cent.

While fixed mortgage rates have come down recently, theyr emain substantially higher than a year ago. The current best five-year fixed rates are at about 4.85 per cent, compared to 2.5 per cent this time last year. Borrowers can check the best rate they could apply for based on home value and loan size, with our best mortgage rates calculator.

Commenting on the figures, Robert Gardner, Nationwide’s chief economist, said: ‘While financial market conditions have stabilised, interest rates for new mortgages remain elevated and the market has lost a significant degree of momentum.

‘Housing affordability for potential buyers and home movers has become much more stretched at a time when household finances are already under pressure from high inflation.’

Gardner continues that the market is likely to remain subdued in beyond the new year, as inflation and interest rates remain high.

‘The outlook is uncertain, and much will depend on how the broader economy performs, but a relatively soft landing is still possible,’ he said.

‘Longer term borrowing costs have fallen back in recent weeks and may moderate further, especially if investors continue to revise down their expectations for the future path of bank rate.’ 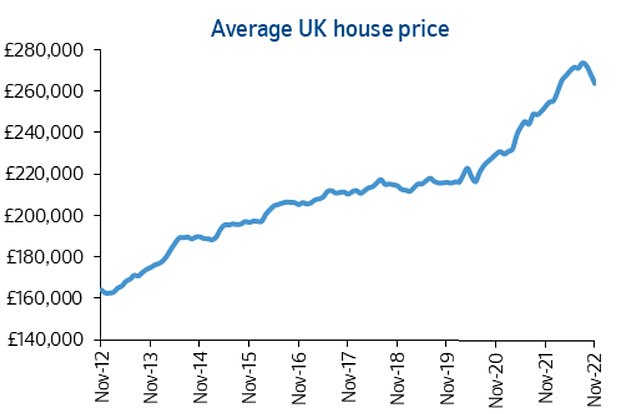 Affording a home still a stretch for many

Despite the fall in prices affordability continues to be stretched across the country due to the rise in mortgage rates.

In London and the South East the average buyer is now among the top earners in the region, sitting in the 90th income percentile.

However, the biggest deterioration in affordability since 2019 has been in Wales, with the typical buyer now located in the 60th income percentile, compared to the 40th percentile in 2019.

But there is some good news. Fixed rates are continuing to slowly drop with five-year remortgage rates falling from their peak, dropping from an average of 5.67 per cent at the start of November to 5.07 per cent across the top ten lenders, according to mortgage broker L&C.

Jeremy Leaf, north London estate agent and a former RICS residential chairman, says: ‘Prices are softening but could have fallen further were it not for those two stalwarts – shortage of supply and strong employment, despite continuing concerns over the rising cost of living and particularly mortgage repayments.

‘The problem is not existing sales, the overwhelming majority of which are proceeding, but new business.

‘However, some buyers are returning now that mortgage rates are beginning to fall but they are more aware of their stronger position so are negotiating hard.’

Borrowers who need to find a mortgage because their current fixed rate deal is coming to an end, or because they have agreed a house purchase, have been urged to act but not to panic.

Banks and building societies are still lending and mortgages are still on offer with applications being accepted.

Rates are changing rapidly, however, and there is no guarantee that deals will last and not be replaced with mortgages charging higher rates.