Four new dinosaurs including the ‘horned crocodile-faced hell heron’ are among more than 550 new animal and plant species discovered by staff at the Natural History Museum (NHM) this year.

The museum’s annual round-up of newly discovered species range from some of the smallest invertebrates swimming in the oceans to ferocious predators that stalked the land millions of years ago.

By far the biggest and most fearsome new species to have been described this year are a pair of giant carnivorous dinosaurs known as spinosaurs, discovered from remains on the Isle of Wight.

The predators were named the ‘riverbank hunter’ and ‘horned crocodile-faced hell heron’ after the swampy environment they would once have lived and hunted in.

The more ferocious of the two, the ‘horned crocodile-faced hell heron’, was named due to a series of low horns and bumps across the brow region and its ‘heron-like’ hunting style.

Both are thought to have roamed land that is now the the Isle of Wight around 129 million years ago.

Artist’s depiction of the two new species of spinosaurid dinosaurs discovered on the Isle of Wight, named ‘Hell heron’ (foreground) and ‘Riverbank hunter’

Remains from Rhomaleopakhus turpanensis, a ‘chunky’ sauropod which had an unusually large funny bone, uncovered in China

Ceratosuchops inferodios: Known as ‘hell heron’ and found in the Isle of Wight

Riparovenator milnerae: Known as ‘riverbank hunter’, also from the Isle of Wight

Brighstoneus simmondsi: An iguanodontian with an unusual snout also from the Isle of Wight

Spicomellus afer: The earliest ankylosaur and first to have been found in Africa

Pendraig milnerae: The earliest known carnivorous dinosaur from the UK

The museum’s total new species for discovered by staff this year – 552 – is despite international travel to field sites or other museum collections having remained largely off limits due to Covid-19 restrictions.

‘It’s been a fantastic year for the description of new dinosaurs, especially from the UK,’ said Dr Susannah Maidment, a senior researcher in paleobiology at the NHM, who helped describe some of these new finds.

‘Although we’ve known about the UK’s dinosaur heritage for over 150 years, the application of new techniques and new data from around the world is helping us to uncover a hidden diversity of British dinosaurs.

‘These specimens are parts of a vast palaeobiological jigsaw puzzle that allows us to understand environments of the past and how they changed over time.’

Riverbank hunter and hell heron were huge carnivorous dinosaurs that most likely walked upright. Their massive, crocodile-like jaws show that they mostly ate fish and possibly other dinosaurs too.

The two spinosaurs – already detailed in a paper in Scientific Reports earlier this year – were just two of six new dinosaurs to have been described by NHM staff in 2021.

In total, four of these were from the UK, one was uncovered in China and the other from the Middle Atlas Mountains of Morocco.

Rhomaleopakhus turpanensis, from China, was a ‘chunky’ sauropod with an unusually large funny bone.

Meanwhile, Spicomellus afer from Morocco was an ankylosaur and had an odd series of spikes attached to the rib.

Ankylosaurs were a diverse group of armoured dinosaurs related to the stegosaurs, which were present throughout the Cretaceous period from 145 to 66 million years ago. 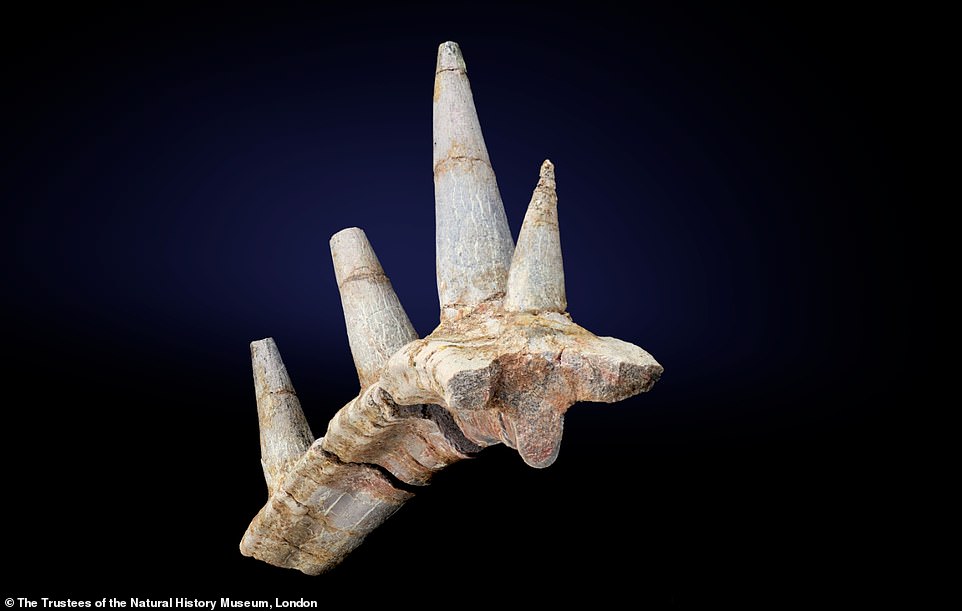 A bizarre armoured spike fossil, found in Morocco, belonged to a new species of dinosaur that was ‘unlike anything else in the animal kingdom,’ NHM researchers found 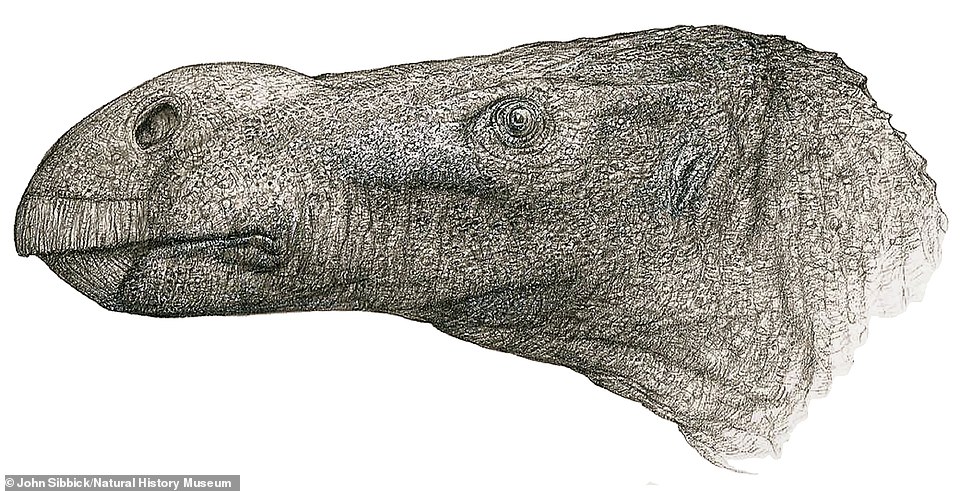 Artistic reconstruction of Brighstoneous simmondsi, a new igaunodontian with an unusual snout found on the Isle of Wight, UK 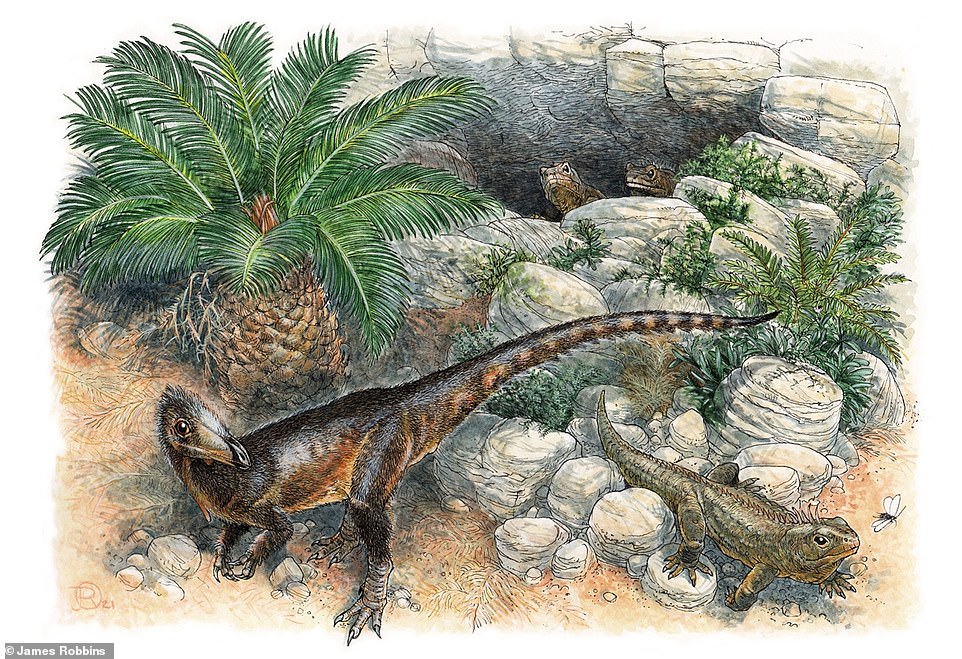 Artistic reconstruction of the ‘small-bodied’ Welsh theropod Pendraig milnerae, the earliest carnivorous dinosaur from the UK

NHM made a number of other fossil finds this year, including algae, arachnids trapped in amber and fossil bryozoans – microscopic aquatic invertebrates that live in colonies, also known as moss animals.

The museum also found two ancient mammals – Megalomys camerhogne, which belonged to a group of rodents which once lived scattered across the Caribbean, and Borealestes cullinensis, a ‘Jurassic mouse’ from the Isle of Skye, Scotland that would have scurried around the feet of dinosaurs 166 million years ago.

Many of the new species described this year have been crustaceans, in particular 291 species of copepods – small, shrimp-like creatures that are found near water.

Despite their small and unassuming appearance, they are critical to our planet’s ecology and carbon cycle, according to the NHM, and form the major component of zooplankton.

‘Copepods are not only free-living but many are parasites, and they can be found living in virtually every other major animal group,’ said Professor Geoff Boxshall, researcher in the department of life sciences at the NHM.

‘I have been focusing my research on these parasitic copepods from fishes and marine invertebrate hosts.’

The moths includes Wallace’s sphinx moth, which has the longest tongue of any insect, according to the NHM, used for reaching the bottom of the nectar tubes.

The moth is notable for having been predicted to exist by Charles Darwin, the father of the theory of evolution, some 40 years before it was recorded in the wild.

The beetles included a pair of glitteringly purple and green metallic beetles from India, a chunky monochromatic beetle with a large pair of jaws from the Philippines and Caccothryptus larryi, a minute marsh loving beetle named in honour of Larry the cat at 10 Downing Street. 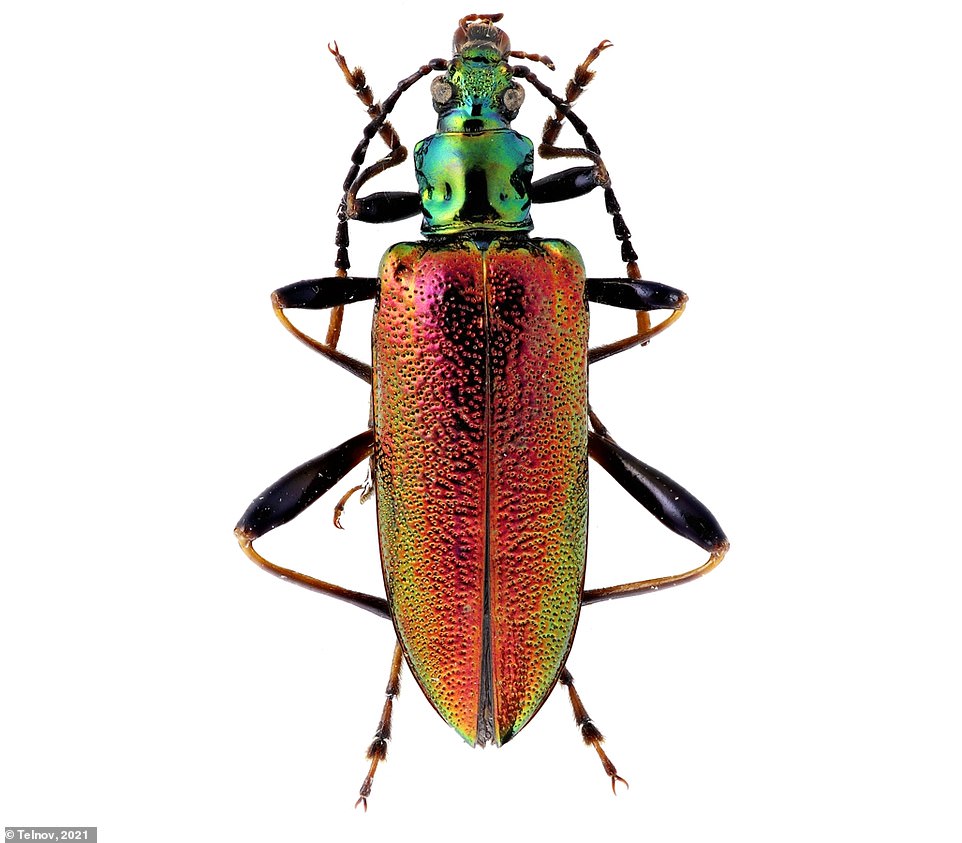 A beautiful green Donaciolagria regia beetle from India. This is the female of the species which is a different colour from the male (below) 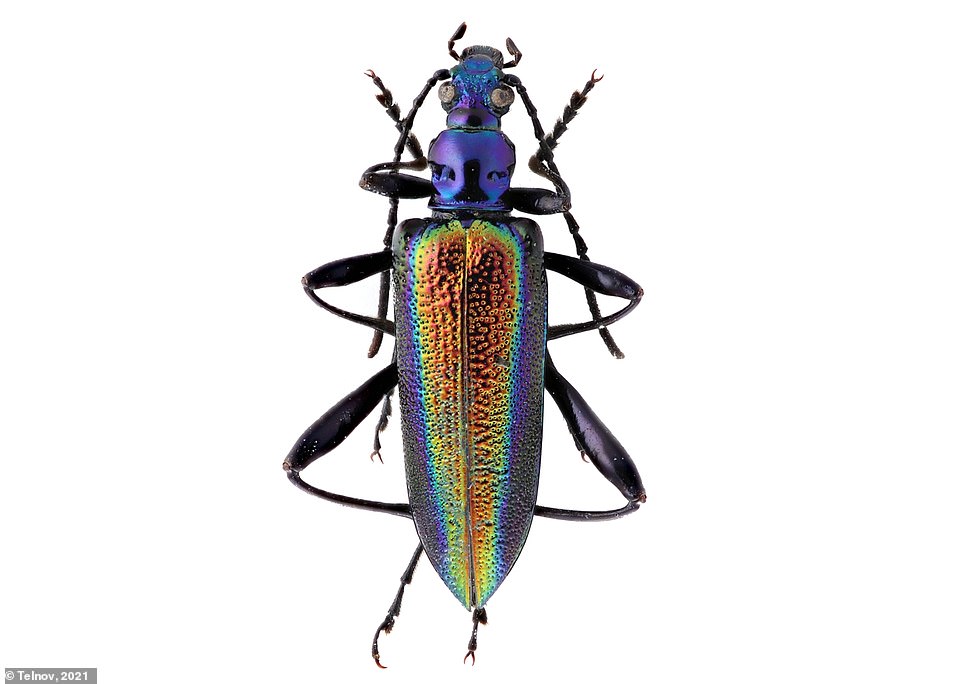 Donaciolagria regia female. Note the striking differences in colour between the male and female of this particular Indian species 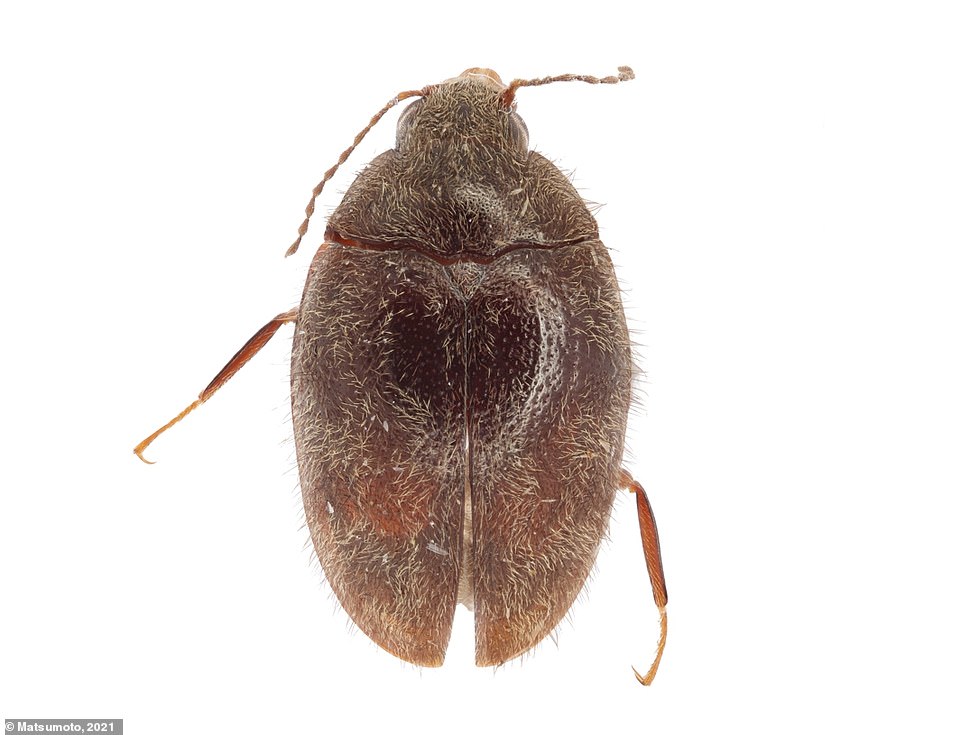 Caccothryptus larryi – a minute marsh-loving beetle from India named after Larry the cat, Chief Mouser to the Cabinet Office

There were also 10 new species of reptiles and amphibians, including five snakes. One of these new snake species, called Joseph’s racer, was described with the help of a 185-year-old painting.

There’s also Rhabdophis bindi, a new species of snake from India and Bangladesh that lives in tropical evergreen forest.

Rhabdophis bindi has a red spot on the nape of the neck, ‘reminiscent of the red beauty spot adorning the foreheads of Indian women’, according to a paper describing the species.

There has also been a new species of caecilian, a type of snake-like amphibian which lives primarily underground and in the water. 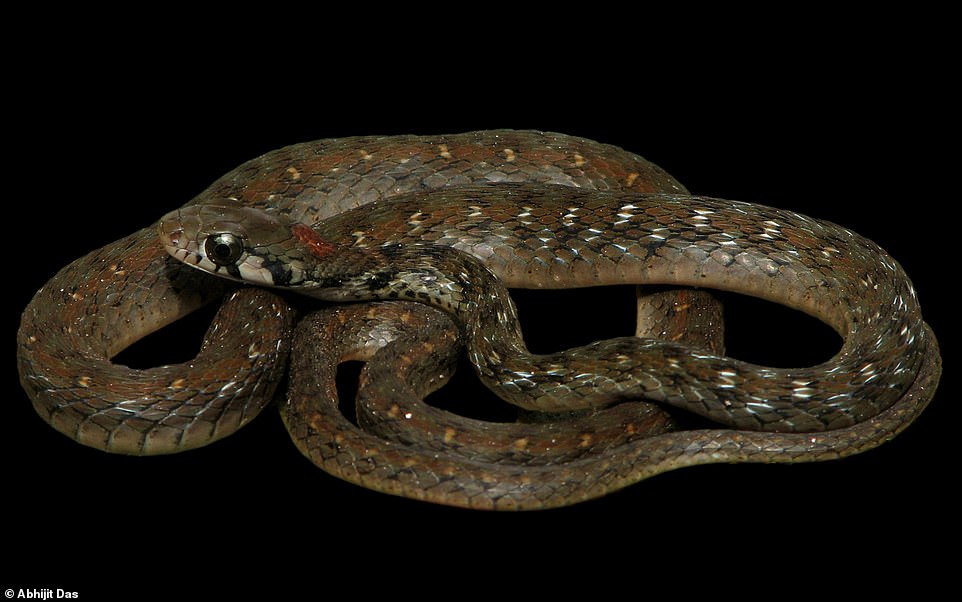 Rhabdophis bindi – a new species of snake from India and Bangladesh that lives in tropical evergreen forest. Note the red spot on the nape of the neck, ‘reminiscent of the red beauty spot adorning the foreheads of Indian women’, according to a paper describing the species 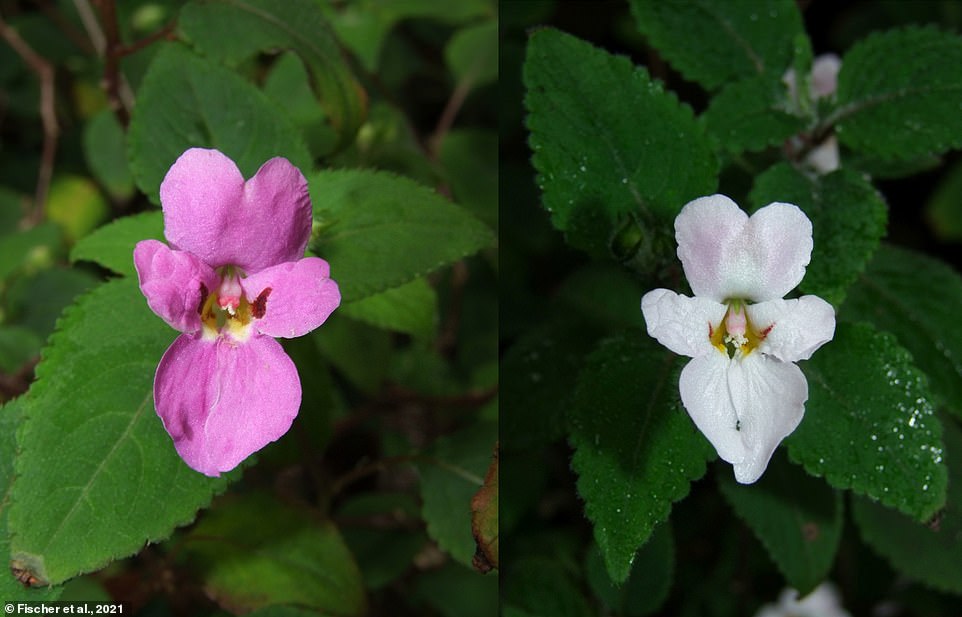 Pictured here is impatiens versicolor – one of five new species of jewelweeds, or touch-me-nots, described from eastern Africa

NHM also found five new species of plants from eastern Africa. Known as jewelweeds or touch-me-nots, they usually produce delicate pink or white flowers, except for a few species which have switched to producing red flowers.

Rather than being pollinated by butterflies, these red flowers are visited by birds, which find it easier to pick the colour red out from amongst green foliage.

NHM staff were also involved in classification of a piece of space rock that fell to Earth in a blazing fireball in February this year.

The space rock burnt through the atmosphere before coming to a sudden stop on a driveway in the Gloucestershire town of Winchcombe. 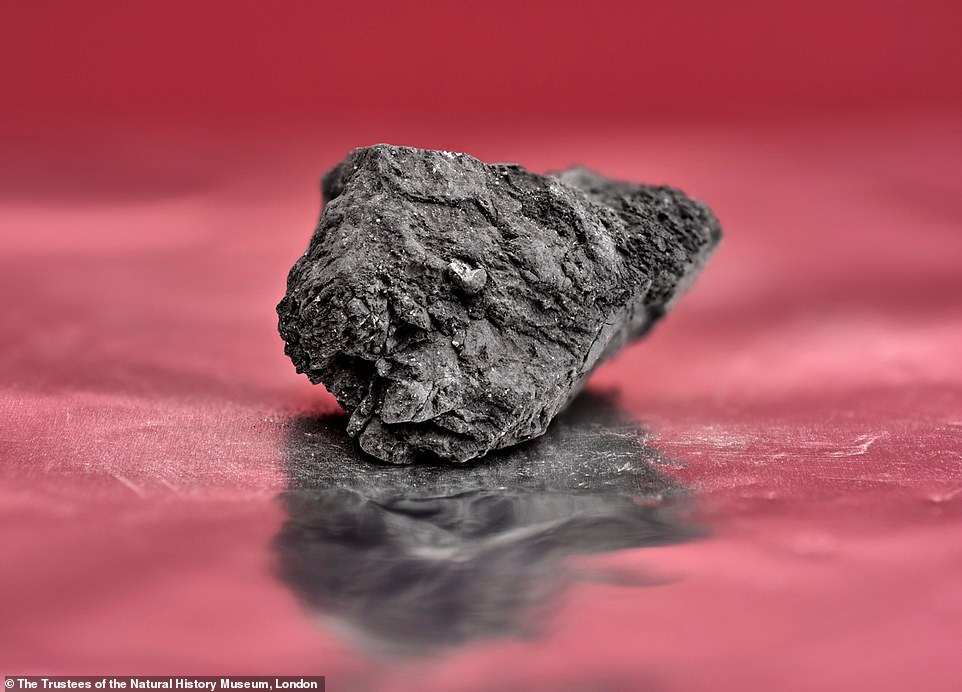 Winchcombe meteorite. A piece of the meteorite which fell to earth during lockdown in February, the first observed meteorite fall to have been recovered in the UK in 30 years

Hundreds of people spotted the fireball streaking across the night sky, and within a matter of hours researchers were able to get out and recover over 600 grams of the meteorite that had travelled billions of kilometres.

Each official meteorite becomes its own type specimen, which is roughly analogous to being a new species.

‘Winchcombe is thought to come from an asteroid that has remained largely unchanged since the birth of the solar system 4.6 billion years ago.’ 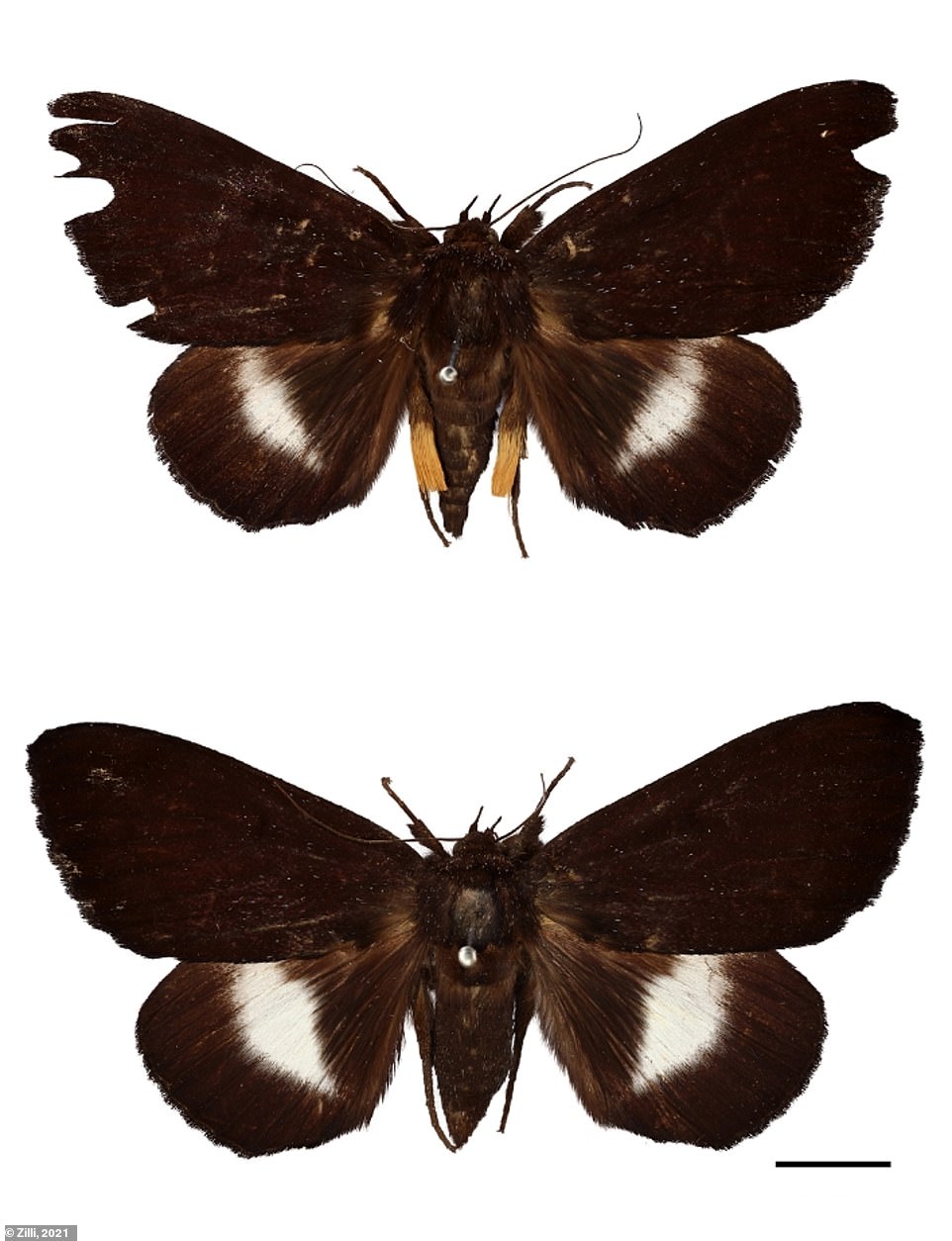 Tabwecala robinsoni. This rather striking new moth from Vanuatu is one of 14 new species of moths and butterflies described this year

Xanthopan praedicta. This species of moth was predicted to exist by Darwin and Wallace, and was finally recognised as its own species this year 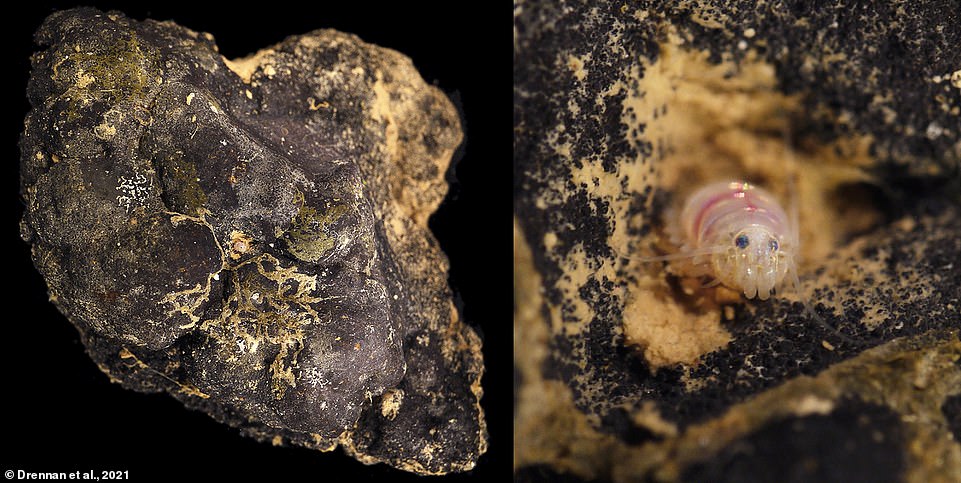 Neanthes goodayi. A new species polychaete worm found to live within the polymetallic nodules which are being eyed up for deep sea mining 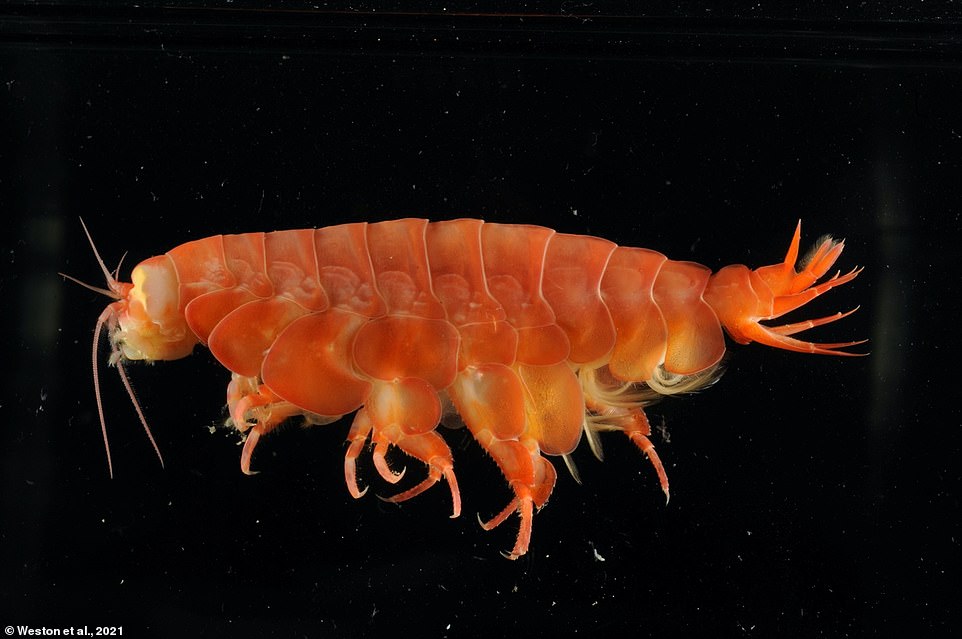 Eurythenes atacamensis. One of two colour morphs of giant isopod from the Atacama Trench off the coasts of Peru and Chile 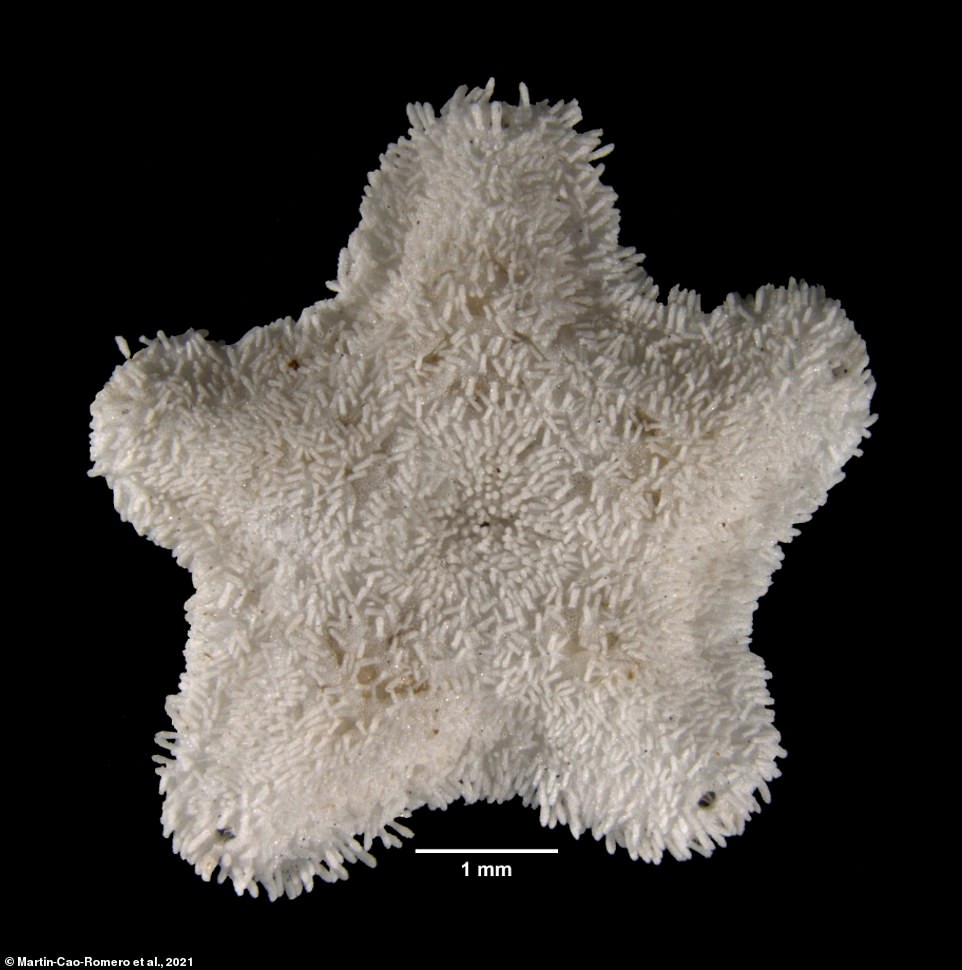 Crinitostella laguardai. It is a deep-sea wood-dwelling seastar from the Gulf of Mexico which feeds on wood at the bottom of the ocean