Nature: At least 65 animal species can LAUGH just like humans – including cows, dogs and seals

In a rare example of something that is, in fact, a laughing matter, experts have found that at least 65 animals — including seals and cows — can chuckle just like humans.

Researchers from California combed through past studies of animal behaviour, looking for records of vocal play signals that might represent a version of laughter.

The findings, they said, may help us better understand the form and function of human laughter, alongside its role the evolution of social behaviour.

In a rare example of something that is, in fact, a laughing matter, experts have found that at least 65 animals — including seals (pictured) and cows — can chuckle just like humans

According to the experts, the following animals are among those that they determined engage in play-based vocalisations:

The study was undertaken by anthropologist Sasha Winkler and communication researcher Greg Bryant of the University of California Los Angeles.

‘This work lays out nicely how a phenomenon once thought to be particularly human turns out to be closely tied to behaviour shared with species separated from humans by tens of millions of years,’ Professor Bryant said.

In their study, the duo looked for information on whether recorded vocalisations were loud or quiet, short or long, high-pitched or low-pitched, noisy or tonal and formed of a single call or a rhythmic pattern.

They then set out to determine if these matched known features of play sounds.

Such vocalisations are thought to help emphasise the non-aggressive nature of play — a necessary function in the animal kingdom in which much play takes the form of rough-and tumble activities and simulated fighting.

According to the team, much has been documented in scientific literature about other features of play behaviour in animals, including aspects of body language such as the ‘play bows’ made by dogs and ‘play faces’ seen in primates.

‘When we laugh, we are often providing information to others that we are having fun and also inviting others to join,’ Winkler said.

‘Some scholars have suggested that this kind of vocal behaviour is shared across many animals who play.

‘As such, laughter is our human version of an evolutionarily old vocal play signal.’

The team have said that further studies looking at play vocalisations in the wild would be of benefit. 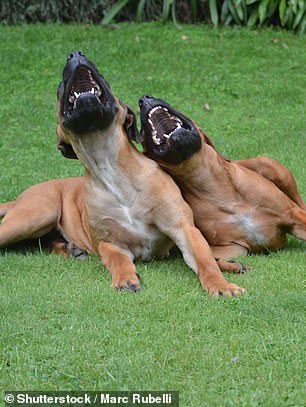 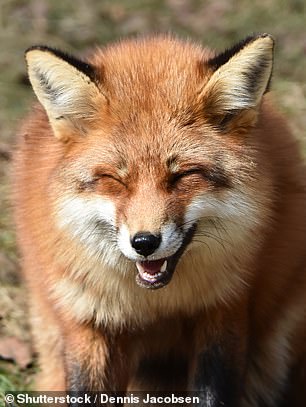 Researchers combed through studies of animal behaviour, looking for records of vocal play signals that might represent a version of laughter — finding such in dogs (left) and foxes (right)

However, they warned, such recordings can be difficult to make, especially for those species whose vocalisations tend to be on the quieter side.

‘Paying attention to other species in this way sheds light on the form and function of human laughter’, the researchers wrote.

Such findings, they added, also help us ‘to better understand the evolution of human social behaviour.’

The full findings of the study were published in the journal Bioacoustics. 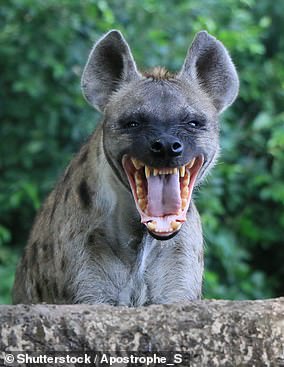 While spotted hyenas tend to be more vocal that their striped counterparts, both make laughter-like noises including giggling and cackling.

Unlike the play vocalisations noted in the study described above, however, hyenas do not laugh when they are having fun.

Instead, these sounds are typically made when the mammals feel threatened or come under attack — or even when they get frustrated.

Older hyenas tend to ‘laugh’ in a lower pitch, and with more consistency, than the varied and higher-pitched sounds made by their younger counterparts.