Researchers studied the role of eye-to-eye contact in the socio-sexual behaviour of 17 bonobos at the Wilhelma zoo in Stuttgart, in southwest Germany.

They found that the less two female bonobos know each other, the more they will try to make eye contact during sex — shining a light on how these primates bond.

Female bonobos develop bonds with each other in order to build up social power, which they use to assert themselves against the males of the species.

Bonobo apes are our closest animal relatives — with a 98 per cent genetic match — and are frequently used in research into how we evolved as a species.

Sex among bonobos is not sex-specific — experts believe that almost all of the apes are bisexual and that as much of 75 per cent of their sex is non-reproductive.

The study was undertaken by biologist Giulia Annicchiarico of the University of Pisa, Italy, and her colleagues.

‘Female [bonobos] engage in homosexual ventro-ventral, genito-genital rubbing during which they embrace each other while rubbing part of their vulvae and, sometimes, clitoris,’ the team wrote in their paper.

Face-to-face — or ‘ventro-ventral’ — sex positions were long thought to be exclusive to human sex, but are enjoyed by bonobos of both sexes, whether in female–female, female–male or male–male pairings.

Ms Annicchiarico added: ‘We found that EEC was negatively affected by female bonding — the more the eye contact, the weaker the social relationship.’

‘My scientific interests mainly concern that sphere of behaviour that was thought to be exclusively human — emotions, empathy and altruistic behaviour as well as non-verbal communication,’ she continued.

Research like this can shed light on similarities between human and ape behaviour — and how eye contact affects similar interactions in human social dynamics as well. 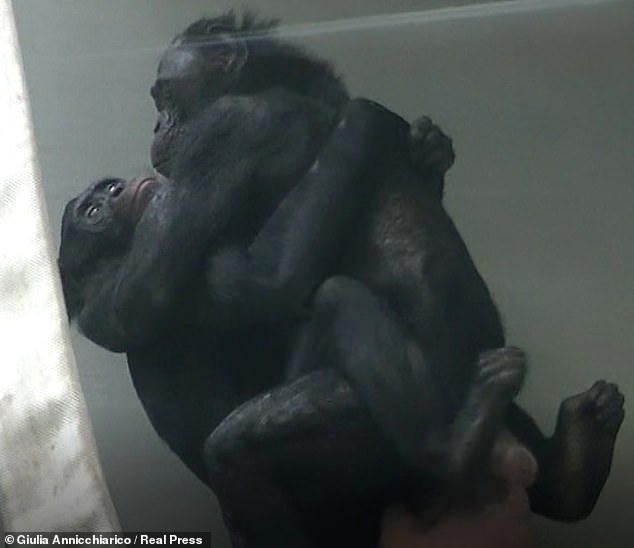 Researchers studied the role of eye-to-eye contact in the socio-sexual behaviour, pictured, of 17 bonobos at the Wilhelma zoo in Stuttgart, in southwest Germany 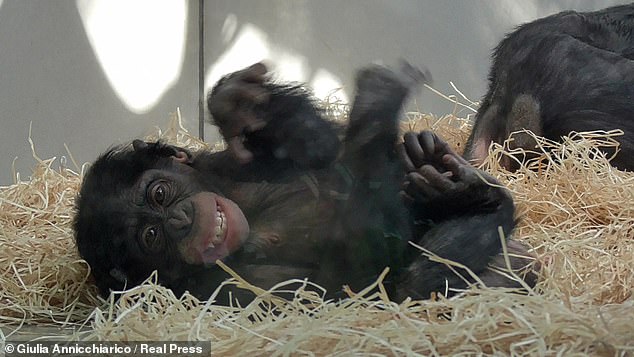 They found that the less two female bonobos know each other, the more they will try to make eye contact during sex — shining a light on how these primates, pictured, bond

‘The great apes, in my opinion, can tell us a lot about why we are what we are, why we act in a certain way and could also suggest different behavioural strategies,’ Ms Annicchiarico commented.

While a lot of work has been done on eye contact between primates, it has traditionally been more focussed on interactions between parents and their infants.

The researchers found that eye contact has a positive influence on the success of ‘performance’, and was key to successful long term relationships — with its importance becoming less so as a given relationship grows. 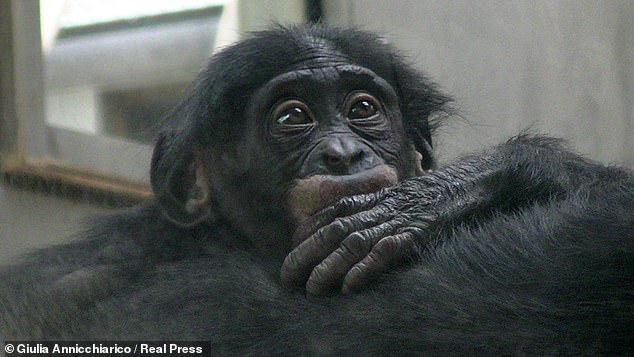 Female bonobos develop bonds with each other in order to build up social power, which they use to assert themselves against the males of the species

Bonobo’s use sex across all ages and combinations since the need for peaceful coexistence is not limited only to heterosexual adult couples.

Researchers found that female homosexual behaviour is particularly frequent and happens very frequently — in fact, many times a day.

Sexual acts serve to reduce social tension between individual apes and is most frequently seen in times of high stress, such as before and during competition for food and after conflict, as a reconciliation behaviour.

Some bonobos have even been seen to appear to provoke each other in order to initiate sex in response.

According to Ms Annicchiarico, there is no linear hierarchy in bonobo society — which is matriarchal — so they rely on flexible patterns of dominance, in which social power is dispersed within the group.

Eye contact is an evolutionary trait that has been positively selected for to allow cohesion among females, who acquire social bonds and power through sexual contact, the team have concluded.

Social power among bonobos is held by those who form the strongest coalitions, something that likely evolved as a strategy to resist attacks by males, who tend to be more isolationist.

The full findings of the study were published in the journal Behaviour.

Homosexuality in nature appears counter-intuitive but is observed in a range of species around the world.

There has yet to be an accepted explanation based on neurological, chemical or behavioural factors to explain why some animals are homosexual and some or heterosexual.

Some scientists say it may be due to exposure to testosterone levels in the womb, although this remains a hotly debated topic which has yet to be proved.

In a book titled: ‘Homosexual Behaviour in Animals: An Evolutionary Perspective’, the author, UCL professor Dr Volker Sommer, writes: ‘Within a select number of species, homosexual activity is widespread and occurs at levels that approach or sometimes even surpass heterosexual activity.’

Homosexual behaviour has been observed in many animals, including: macaques, dwarf chimpanzees, dolphins, orcas and humans.

Some studies claim homosexuality may be a common as being found in up to 95 per cent of all animal species.

There are two principle schools of thought when it comes to the prevalence of homosexuality in nature.

One theory states that homosexuality in animals doesn’t need an explanation, with animals being homosexual just as naturally as they are heterosexual.

It appears irrational for it to survive as a trait as it hinders the ability to procreate directly, but many speculate it allows individuals to ensure their genetic material is passed down the generations indirectly as they are able to look after members of their family with offspring.

For example, helping nurture the offspring of a sister.

Similar behaviour dedicated to the ‘greater good’ of a large group have been seen in various species.

For example, in familial wolf packs only one pair of animals breeds – the alpha and the beta. The other animals ensure the protection, feeding and nurturing of the litter.

This allows their genetic material to pass indirectly to the next generation through their sister, brother, mother etc or whatever the relationship may be.

The same school of though applies to animals which have exceeded their reproductive age.

For example, female elephants which are now too old to have offspring.

They still play a crucial role in the protection of the young a the matriarch leads the group to spots of food, water and chases of would-be predators.

These actions ensure the survival of the young and vulnerable members of her family, again helping ensure her genetic material is passed down through the generations indirectly.

A similar concept can be applied to homosexuality, some experts claim.

Without the ability to reproduce directly, they are able to expend energy looking after the offspring of their family members.

Another theory states that homosexual behaviours aid in the successful passing on of genes in the long-term as young animals ‘practice’ mating techniques and ways of attracting a member of the opposite sex.

It continues to be found in more species but the level of homosexuality in individual species is not well enough studied to be able to determine if homosexuality is becoming increasingly common.