Nature: Goats often prefer to work for life’s treats rather than being handed them on a plate

Goats often enjoy working for life’s little treats — rather than simply having them handed to them on a plate — a study has concluded.

Swiss and German experts offered goats the choice of two treats — one freely accessible, the other behind a sliding door the animals had to nudge open.

They found that the goats would opt for the harder-to-get treat nearly half the time — with species of high-yield dairy goats being consistently interested in the puzzle.

The team believe that the goats derive a sense of satisfaction — as well as control over their surroundings — by choosing the treat that involves solving a task first.

The findings, they added, could be used to help improve animal husbandry practice to better ensure that goats receive adequate amounts of mental stimulation.

Goats often enjoy working for life’s little treats — rather than simply having them handed to them on a plate — a study has concluded. Pictured: a dwarf goat (stock image)

In the study, the researchers worked with 30 high-yield dairy goats — Saanen, Chamois Coloured and crosses of the same — and 27 Nigerian dwarf goats who had not been bred for milk productivity.

Each of the animals was provided with unrestricted access to food — as to ensure that hunger was not motivating their actions towards the treats — and had previously learnt how to open sliding doors with their muzzles.

In the tests, which each animal repeated 10 times, the goats were placed individually into a cubicle with access to the two sliding doors, beyond both of which were placed a treat in the form of piece of uncooked pasta.

One door was left open — making the treat easy to acquire — while the other door was closed and required pushing open to expose the pasta.

‘In just under half of cases, both breeding lines chose the second option’, explained paper author and husbandry expert Nina Keil of Agroscope, the Swiss centre of excellence for agricultural research.

‘In other words they seem to enjoy challenges of this type.’

In fact, the team found that 53 of the 57 goats tested chose the more difficult-to-access treat at least once.

The dairy goats were found to be consistently interested in the challenge, and quicker to open the door, while dwarf goats took longer to warm up to the problem, but increasingly opted to go for the closed door the more the test was repeated.

‘We had expected the dwarf goats to show interest, since they had already been observed to do so in a similar experiment,’ said paper author Katrina Rosenberger, also of Agroscope.

‘However, the dairy goats came as a surprise,’ she added.

‘Since they are bred for a high milk yield, we had expected them to conserve their energy and be less motivated to make an effort to get a reward, particularly if they could get the same reward without having to make that effort.’ 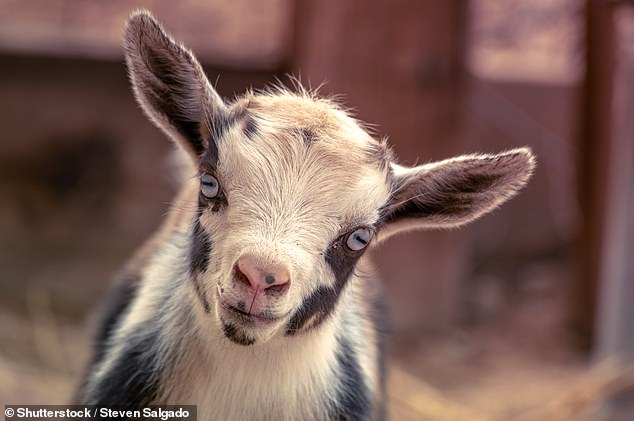 The team believe that the goats derive a sense of satisfaction — as well as control over their surroundings — by choosing the treat that involves solving a task first. The findings, they added, could be used to help improve animal husbandry practice to better ensure that goats receive adequate amounts of mental stimulation. Pictured: a newborn Nigerian dwarf goat

This behaviour — preferring to make an effort to get a reward — is what is called ‘contrafreeloading’, the team explained, and has previously been witnessed in other animals including domesticated cattle, chickens and pigs and wild animals in zoos.

‘We assume that the animals display this behaviour because solving a task gives them control over their environment and triggers positive emotions,’ Dr Keil said.

‘They apparently derive a certain satisfaction that makes the additional effort worthwhile.’

According to the researchers, the living conditions of domestic goats should be adjusted to make allowances for their need for mental gratification.

‘Proper husbandry should take account of the animals’ cognitive wellbeing as well as other needs’, said Dr Keil.

‘Our results are a first step in this direction. Now we need to repeat the experiment over a longer period and under real-life conditions on a farm so that we can see what happens to the animals’ motivation.’