Nature: Octopuses may have short dreams ‘like small videoclips, or even gifs’

Octopuses have two sleep states just like humans — a ‘quiet’ one where their skin stays pale and short periods of ‘active’ sleep in which they twitch and change colour.

Experts from Brazil who recorded video clips of the eight-legged animals dozing said that octopuses may have short dreams ‘like small videoclips, or even gifs.’

The findings may help researchers to better understand the evolution of sleep, and why multiple sleep states arise in some animals but not others.

Octopuses have two sleep states just like humans — a ‘quiet’ one where their skin stays pale and short periods of ‘active’ sleep in which they twitch and change colour. Pictured: a sleeping octopus seen here in its active sleep phase, during which it twitched and changed colour

There are five main stages of sleep.

Stage 1 is the lightest stage of sleep. Brain activity is slightly slower than during wake time, and there is muscle tone present in the skeletal muscles. Breathing occurs at a regular rate.

Stage 2 usually follow Stage 1 and represents deeper sleep. During Stage 2 sleep, the sleeper is less able to be awakened.

Stage 3 and Stage 4 sleep are progressively deeper stages of sleep, and a sleeper would be difficult to wake at this point.

Stage 5, or REM sleep, is the stage of sleep associated with dreaming. Brain activity resembles wake time, but skeletal muscles are without movement. The breathing is more erratic and irregular. The heart rate often increases.

It was thought that only birds and mammals had two different stages of sleeps, but recent studies have demonstrated that some reptiles undergo both REM (rapid eye movement) and non-REM sleep stages, and that cuttlefish have something similar.

Cuttlefishes, like octopuses, both belong to the cephalopod class of molluscs.

‘That led us to wonder whether we might see evidence of two sleep states in octopuses, too,’ explained paper author and neuroscientist Sidarta Ribeiro of the Federal University of Rio Grande do Norte.

‘Octopuses have the most centralized nervous system of any invertebrate and are known to have a high learning capacity.’

In their study, Professor Ribeiro and his colleagues filmed specimens of Octopus insularis (a species found off of the coast of Brazil) while they slumbered.

The team used visual and tactile stimulation tests to confirm the animals were indeed sleeping.

During the ‘quiet sleep’ phase, the octopuses were seen to remain still, keeping their pupils contracted to just a slit and maintaining a pale skin colour.

In the ‘active’ phase, however, the creatures changed their skin colour and texture, moved their eyes about and twitched their body and suckers.

‘What makes it more interesting is that this ‘active sleep’ mostly occurs after a long “quiet sleep” — generally longer than 6 minutes — and that it has a characteristic periodicity,’ added Professor Ribeiro.

Each cycle repeated typically every 30–40 minutes, the team said.

‘The alternation of sleep states observed in the Octopus insularis seems quite similar to ours,’ said paper author Sylvia Lima de Souza Medeiros, also of the Federal University of Rio Grande do Norte.

This, she added, is ‘despite the enormous evolutionary distance between cephalopods and vertebrates, with an early divergence of lineages around 500 million years ago.’

‘If, in fact, two different sleep states evolved twice independently in vertebrates and invertebrates, what are the essential evolutionary pressures shaping this physiological process?’ she questioned. 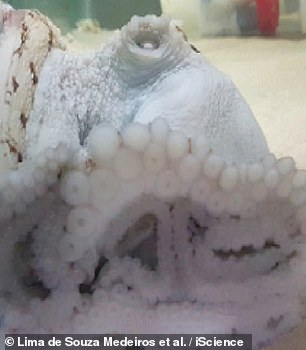 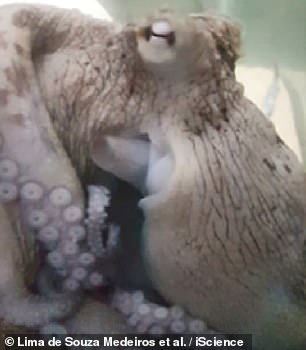 During the ‘quiet sleep’ phase (pictured), the octopuses were seen to remain still, keeping their pupils contracted to just a slit and maintaining a pale skin colour. In the image on the right, the octopus can be seen with its eyes open

‘The independent evolution in cephalopods of an “active sleep” analogous to vertebrate REM sleep may reflect an emerging property common to centralized nervous systems that reach a certain complexity.’

According to the researchers, their findings raise the possibility that octopuses experience something similar to dreaming.

‘It is not possible to affirm that they are dreaming because they cannot tell us that, but our results suggest that during ‘active sleep’ the octopus might experience a state analogous to REM sleep,’ said Ms Medeiros.

This, she explained, if the state during which humans dream the most.

‘If octopuses indeed dream, it is unlikely that they experience complex symbolic plots like we do,’ she continued.

‘Active sleep  in the octopus has a very short duration — typically from a few seconds to one minute. If during this state there is any dreaming going on, it should be more like small videoclips, or even gifs.’ 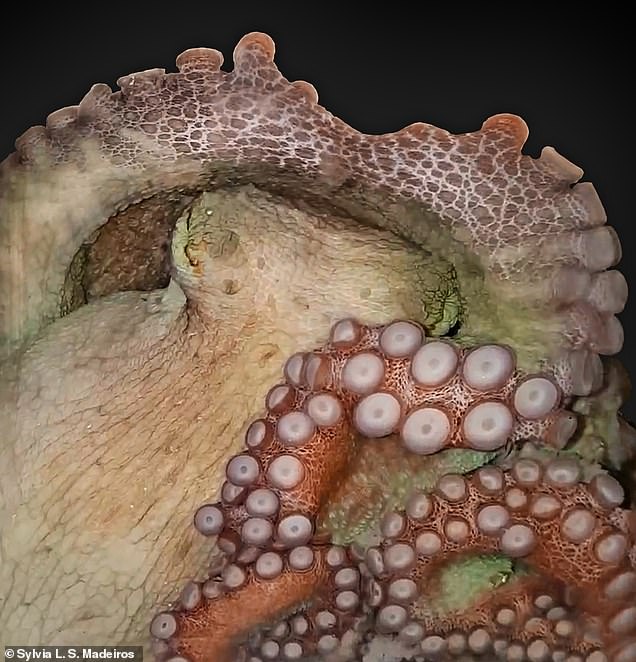 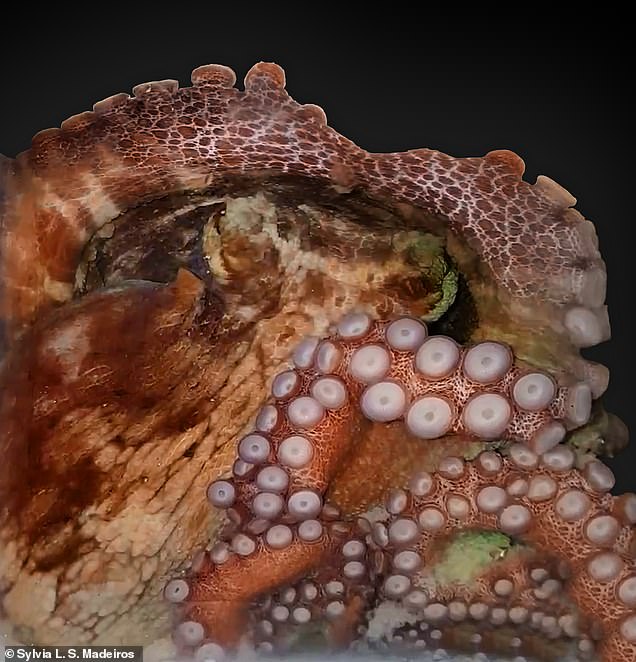 In the ‘active’ sleep phase, the octopuses were seen to change their skin colour (as pictured, with different shades on either side) and texture, as well as moving their eyes and body

With their initial study complete, the researchers are now looking to record neural data from octopuses and other cephalopods in order to better understand what happens when these animals sleep.

The team would also like to investigate how sleep plays a role in the metabolism, cognition and learning of octopuses.

‘It is tempting to speculate that, like in humans, dreaming in the octopus may help to adapt to environmental challenges and promote learning,’ said Professor Ribeiro,

This, he continued, leads to questions like ‘Do octopuses have nightmares? Could octopuses’ dreams be inscribed on their dynamic skin patterns? Could we learn to read their dreams by quantifying these changes?’

The full findings of the study were published in the journal iScience.