‘Naughty Tory’ MP Charlie Elphicke agreed to pay a woman £5,000 in ‘compensation’ after allegedly sexually assaulting her, withdrawing the money in small amounts to prevent his wife from finding out, a court heard today.

The 49-year-old father-of-two said the complainant wanted ‘compensation’ after the alleged incident at his Belgravia townhouse in London in 2007.

Elphicke said he believed the woman ‘wanted to take matters further’ after they shared a bottle of wine while his wife, MP Natalie Elphicke, was away on business, but said he had been ‘under a misapprehension’ in making advances towards her.

The woman, in her early 30s at the time, alleged Elphicke tried to kiss her, groped her breast, then chased her around his home while trying to grab her bottom.

A second woman, a parliamentary worker in her early 20s, has accused Elphicke of two sexual assaults inside the Palace of Westminster in 2016.

Elphicke, who was Dover MP from 2010 until 2019 when he was succeeded by his wife, denies three counts of sexual assault.

Neither complainant can be identified due to laws granting anonymity to alleged victims of sexual offences.

‘Naughty Tory’ MP Charlie Elphicke agreed to pay a woman £5,000 in ‘compensation’ after allegedly sexually assaulting her, withdrawing the money in small amounts to prevent his wife MP Natalie Elphicke (right with Elphicke outside court) from finding out, a court heard today. The 49-year-old father-of-two said the complainant wanted ‘compensation’ after the alleged incident at his Belgravia townhouse in central London in 2007

‘I’m not into bondage’: Tory MP Elphicke denies sexually assaulting woman in 2007 as he reveals he’s ‘not into whips’

‘Naughty Tory’ Charlie Elphicke denied sexually assaulting a woman in his London townhouse in 2007 as he revealed that he has ‘never been interested in’ bondage and whips.

Southwark Crown Court was played a recording today where Elphicke was interviewed by Met police in 2018.

DCI Simpson asked the former MP about a passage from the woman’s testimony in which she claimed he talked to her about ‘silk and leather’.

He asked ‘are you familiar with that term?’ to which Elphicke replied: ‘No, what’s that? I don’t understand. Where’s that come from?’

‘I don’t think we had that conversation. I have never heard of this term. I don’t know what it means.’

The officer interjected: ‘It is to do with bondage and whips.’

Elphicke said: ‘That is never something I have been interested in.

‘I am not that sort of person. I am not into that kind of thing.’

Excerpts from Elphicke’s interview with the Metropolitan Police in March 2018 were played during his trial at Southwark Crown Court today.

In them he said the woman asked him not to tell his wife Mrs Elphicke about the 2007 incident and to pay her £5,000.

He said: ‘I said we should tell Natalie. She said she didn’t want Natalie to know.

‘She wanted compensation due to the destructive nature of what happened. We settled on £5,000 in the following weeks I gave her the money in cash.

‘It is a lot of money. I came to deeply regret it.’

Asked if he had ever told his wife about the payments, former Tory government whip Elphicke told the interviewing officers: ‘No.’

He also described how the first alleged incident happened and said that he stopped immediately when the woman told him to.

Elphicke said: ‘My wife Natalie was away and I got chatting to her and we decided to open a bottle of wine and have a chat sitting on the sofa.

‘It was very convivial, very friendly. She became friendly. It was tactile and the atmosphere was, it was very warm and convivial and I believed she wanted to take matters further so I leant over and I kissed her.’

The court heard: ‘At first she responded positively but after a short period it became clear this is not what she wanted.

‘I thought she had consented and wanted me to kiss her and things got to that point, but after a time it became clear this was not what she wanted. 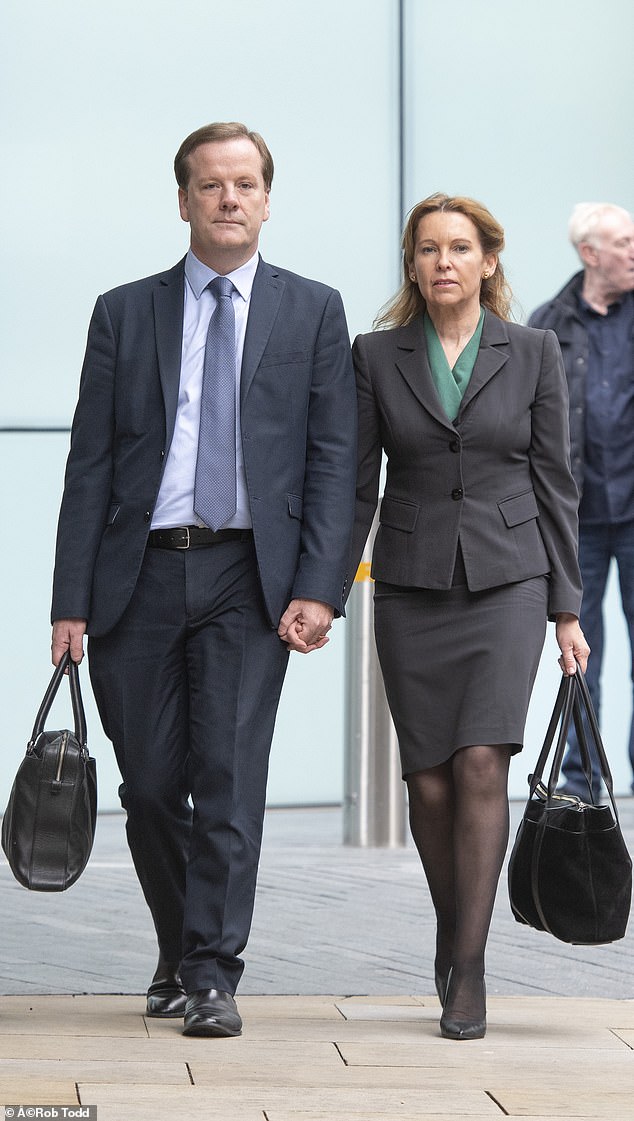 The woman, in her early 30s at the time, alleged Elphicke tried to kiss her, groped her breast, then chased her around his home while trying to grab her bottom. A second woman, a parliamentary worker in her early 20s, has accused Elphicke of two sexual assaults inside the Palace of Westminster in 2016. Elphicke, who was Dover MP from 2010 until 2019 when he was succeeded by his wife (right), denies three counts of sexual assault

‘I did not touch her breast. We were on the sofa sat side by side. I believe what happened was we were both sitting facing forwards.

‘I was sat on the left hand side and she was sat on right hand side. I put my arm on the back of the sofa. I turned to her. If she felt anything on her breast it would behave been an arm not a hand not on purpose.

Elphicke was ‘very concerned’ about being included in Telegraph’s ‘dirty dossier’ of Tory MPs accused of sexual assault, court hears

Charlie Elphicke said he was ‘very concerned’ about being included in The Telegraph’s ‘dirty dossier’ of Tory MPs accused of sexual assault published October 30, 2017.

The court was played a recording where Elphicke was interviewed by two Met Police officers in 2018.

DCI McInerney: ‘A list was published sometime at the end of last year some sort of dossier, some list I think which you were named in. Did that ever cause you concerns when it was published?’

Elphicke replied: ‘Obviously yes, it did.

‘I found out I was on it I believe November 3.

‘When I found out on the Wednesday I was very concerned. I think everyone on there was very, very, concerned and indeed then on the Friday evening I’m suddenly being phoned up and told I’m being suspended for unspecified allegations.

‘I asked what these allegations were and the Chief Whip would not tell me.

‘So I’ve had I think it is a good four months, four and a half months to this day where I have not known what the allegations against me are and obviously, that has caused me much fear much concern and I find it unnecessary to have been in this situation for so long without having been able to make an answer against any case against me.’

‘I put my right arm on the back of the sofa, my left arm I put on the top of her arm for the purpose to hold her gently.

‘I believe she consented, it was what she wanted, as soon as I realised this was not the case I stopped immediately.

‘She was not happy, she was very unhappy. I was very apologetic because I had been under a misapprehension.’

The woman later alleged that Elphicke chased her round the Belgravia townhouse chanting ‘I’m a naughty Tory’.

Elphicke told police they discussed the matter at a later date, during which the woman was ‘very unhappy’ with what had happened.

He said: ‘I was incredibly apologetic. I believed this was what she wanted.

‘She said she accepted my explanation, my apology, and that I had been under a misapprehension.’

He said that he ‘got it wrong and for the last ten years I have had to live with this’, adding: ‘I did not grope her.

‘She felt I had done that and I explained no I hadn’t done that. I explained to her this is a situation where I went to put a hand on her other arm which would have been across her chest and she may have thought that was the case and that is absolutely not my intention.

‘Every life has its regrets and this is the regret of my life. I got it wrong. And for the last ten years I have had to live with this.’

He also said he was ‘not that sort of person’ who was interested in bondage and whips.

‘I don’t think we had that conversation. I have never heard of this term [silk and leather]. I don’t know what it means.’

The officer interjected: ‘It is to do with bondage and whips.’

Elphicke said: ‘That is never something I have been interested in. I am not that sort of person. I am not into that kind of thing.’

Moving on to the 2016 allegations, Elphicke said he was shocked to be ‘brought completely blind’ in a meeting with deputy chief whip Anne Milton and chief whip Julian Smith, which was played to the jury yesterday.

The jury heard he took former Attorney General Dominic Grieve along to his next interview who ‘castigated’ the pair for conducting ‘not a fair or proper process’.

Charlie Elphicke told people to ‘steer clear’ of a woman who accuses him of sexual assault, a court heard today.

The woman alleges Elphicke, 49, groped her twice inside the Palace of Westminster in 2016.

Margot James, 62, told jurors that Elphicke tried to ‘bad-mouth’ the woman, in her 20s, in the ‘members’ tearoom’ at Westminster.

Ms James was MP for Stourbridge between 2010 and 2019 and was Minister for the Arts in 2018 before she had the whip withdrawn and stood unsuccessfully as an independent.

She said in her statement written in December 2017: ‘I have been asked to provide a statement in connection to a colleague of mine, Charlie Elphicke MP.

‘I am currently an MP for Stourbridge having been elected in May 2010. Prior to this I ran my own business for approximately 15 years.

‘[The woman] was young but very competent, serious about her work and acted appropriately at all times. I don’t actually work with her.

‘She later contacted me to request my support.

‘Some weeks after, Charlie spoke to me in the members’ tearoom. He suggested people should steer clear of her.

‘He said she had said things about him which had no basis whatsoever and continued to bad-mouth her.’

‘I attend the meeting with the Deputy Chief Whip Anne Milton who is a senior minister in the government and Julian Smith who is the Vice Chamber in the Household a senior member of the government who is my own Whip and with no prior warning what the meeting’s about they accuse me of sexually harassing and assaulting [the woman]. I rejected these allegations.

‘I was shocked, shocked by the meeting and shocked to be called in without any notice. It was clear to me some sort of investigation had taken place by Ms Milton and that was a concern to me.

‘It was a concern to have allegations launched on me at which I had no notice, no representation and literally was brought completely blind and I was very concerned and worried it can only serve to contaminate the evidence and make it harder to get an answer.

‘I had a further meeting where I took along Dominic Grieve the former Attorney General who castigated them for breaches of natural justice, the risks of contaminating the evidence in this matter, the risk of leading people and you know, the general conduct was not a fair and proper process.

‘That was on Tuesday January 17 and Mr Grieve came along as my representative and I was told there the matter was being dropped and I was told she did not wish to proceed with her complaint and that no further action would be taken. Ms Milton told me that the papers in relation to this matter would be destroyed.

‘I sent various text messages to Anne Milton setting out my serious concerns asking to be able to see what had been alleged asking for the papers asking for the detail and I received nothing whatsoever.’

Elphicke continued: ‘I see the allegation is I touched her leg over her clothing and ran my hands up her thigh and into her groin without her consent.

‘This was not true. If either of these allegations had been true she would, could have immediately made a complaint.

‘She made no complaint to me or anybody else about this business.’