As hospitals in states worst hit by the disease become overrun with patients in need of ventilators, and other states prepare for similar situations, Mercy will take care of non-COVID-19 in-patients.

Bottles of water and soda Canada Dry, Sunkist and Red Bull were among the shipment.

As the number of confirmed infections surpassed 35,000 and deaths 400, the ship sailed up the west coast Monday with 800 Navy medical personnel and support staff as well as 70 civil service mariners.

The USNS Mercy is docked at Naval Base San Diego as it prepares to deploy to assist with the COVID-19 pandemic. It will sail to Los Angeles Monday with 1,000 hospital beds for non-coronavirus patients 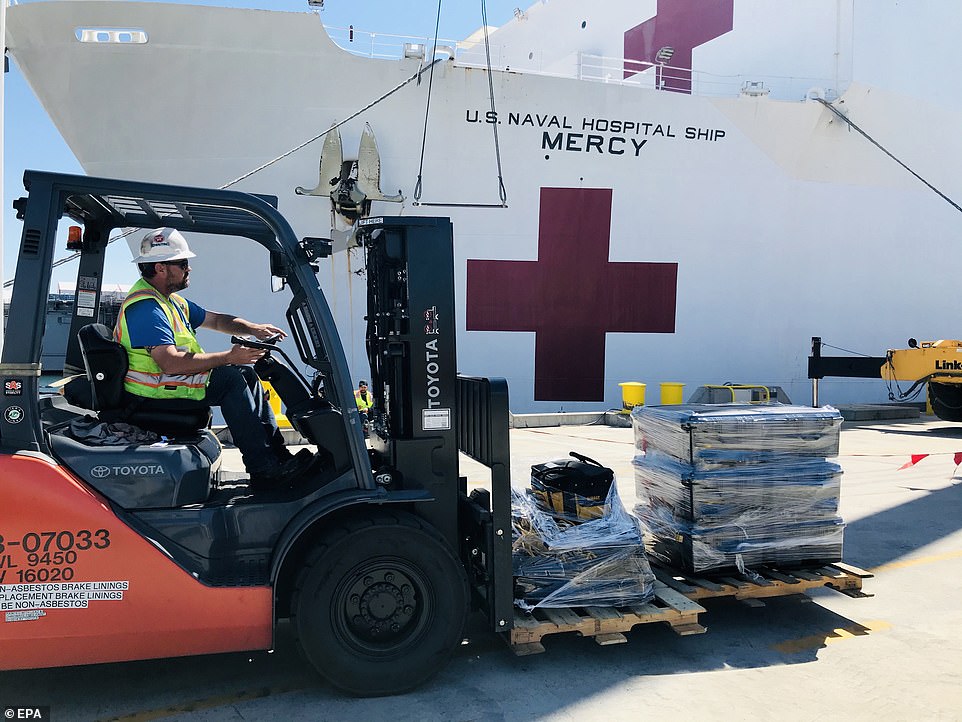 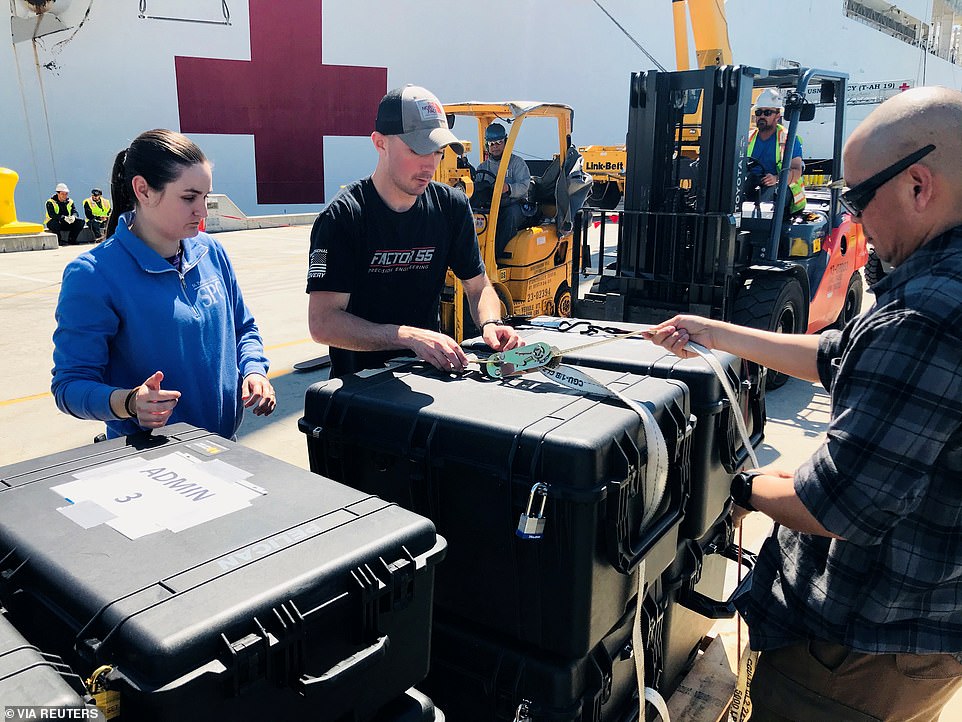 ‘The ship will serve as a referral hospital for non-COVID-19 patients currently admitted to shore-based hospitals, and will provide a full spectrum of medical care to include critical and urgent care for adults,’ the Navy said in a news release Monday.

‘This will allow local health professionals to focus on treating COVID-19 patients and for shore-based hospitals to use their Intensive Care Units and ventilators for those patients.’

The ships are not built to deal with respiratory disease outbreaks because they don’t have segregated compartments, meaning they will not treat COVID-19 patients.

They ships were designed for trauma and combat casualties and up staff to suit those services come with the ship. Up to 1,200 Navy staff can be accommodated on board.

The ship was originally destined for Washington one of the first states to be hit by quick community spread.

However it was determined California was in need of more help than its northern neighbor state. In Washington State there were 1,996 confirmed cases and in California there were 1,816. 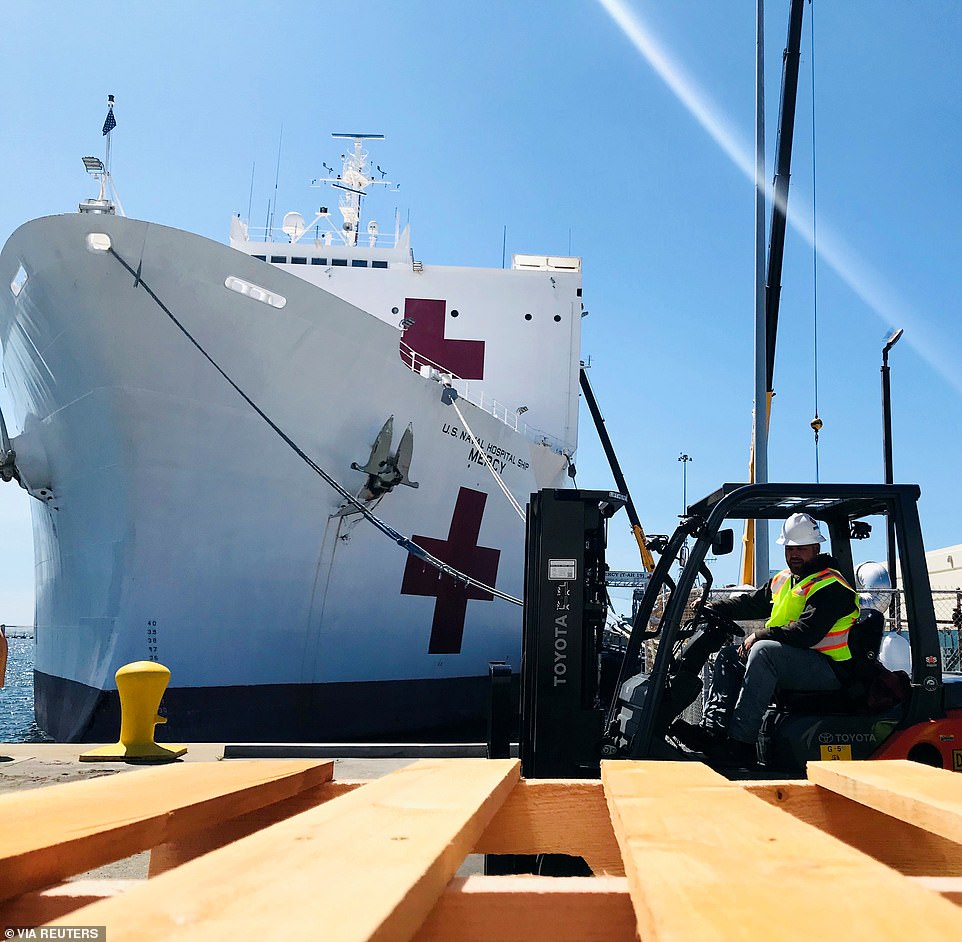 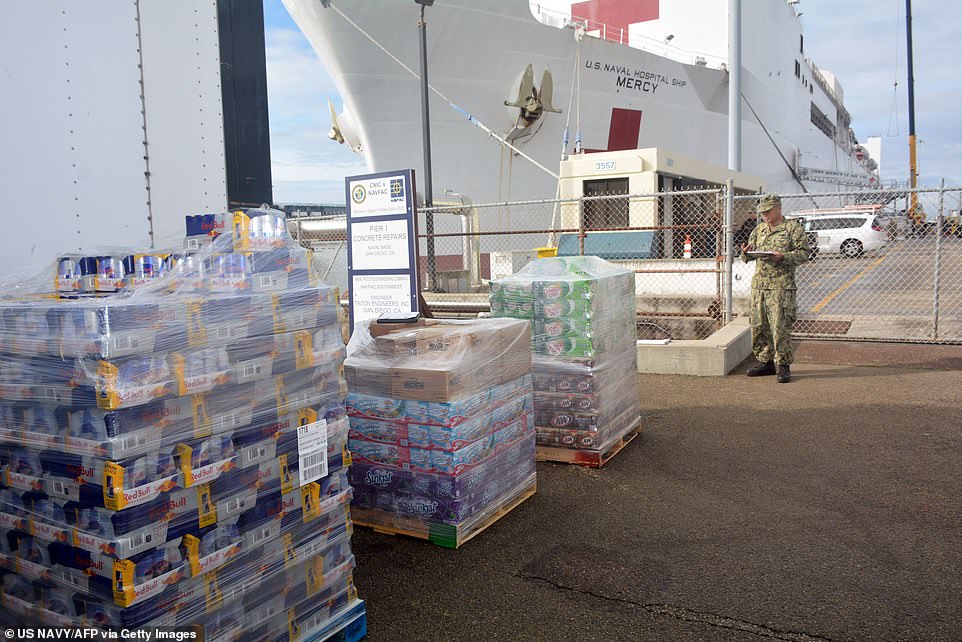 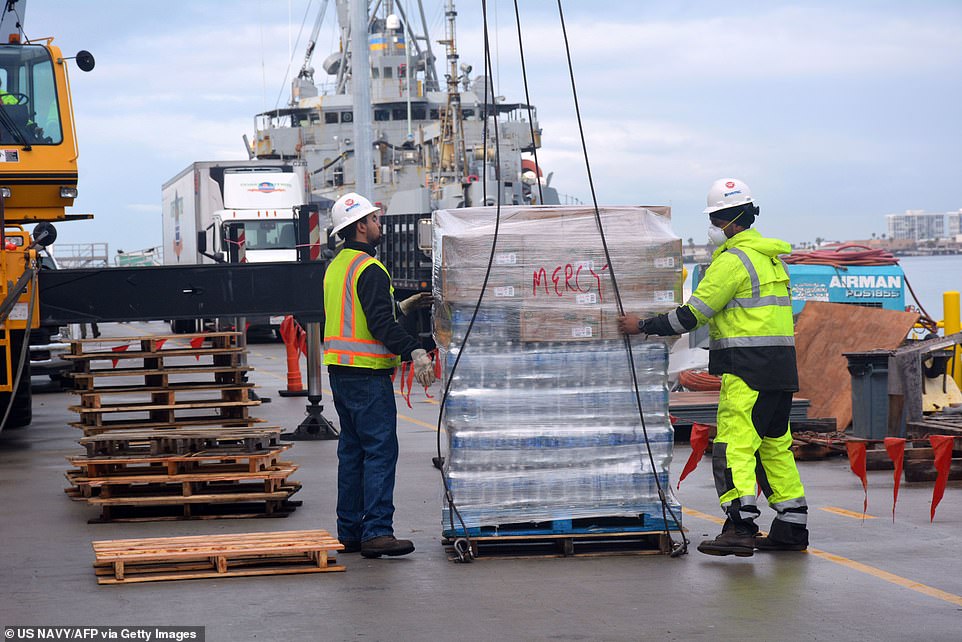 Images show crates of water bottles prepared to go on board where 1,000 people can be moved from hospitals in LA so beds there can go to coronavirus patients in need of ventilators 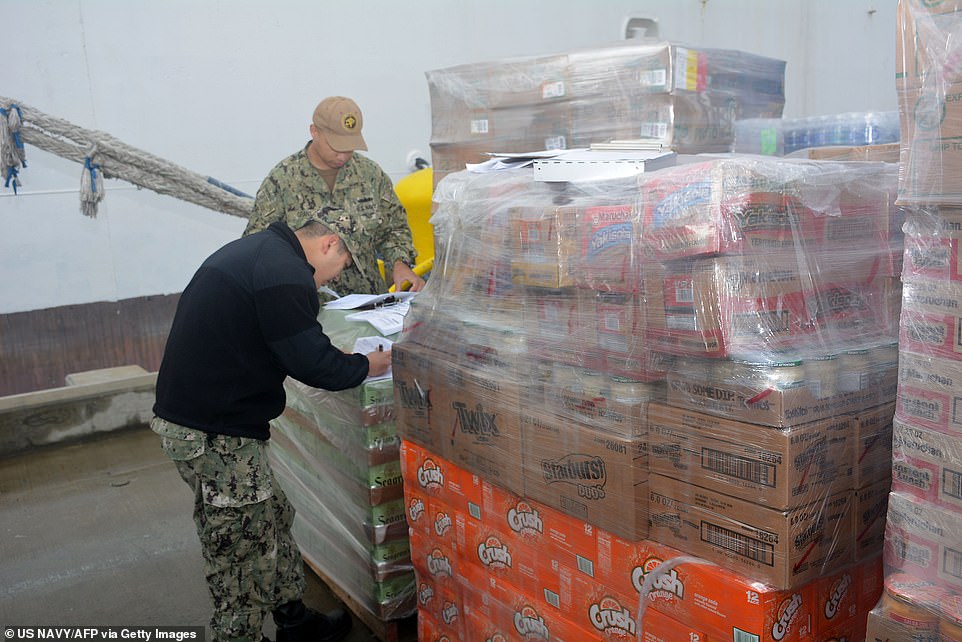 Sugar snacks and drinks including Twix, Starburst Duos and Crush Orange are packed and ready to go on Mercy Saturday

‘The Department of Defense has been given direction to dispatch it to Los Angeles immediately,’ Federal Emergency Management Agency Administrator Peter Gaynor said Sunday during a press conference. ‘DoD has advised that Mercy can get into position within a week or less of today’s order. Even though there are more cases right now in Washington, the projected needs for beds in California is five times more that of Washington.’

In New York there were more than 16,000 confirmed cases and 99 deaths by Monday. New York City Mayor Bill de Blasio blasted President Trump for not helping his home city and state more as it led the states in terms of infection rates.

Governor Andrew Cuomo has also ordered hospitals to deliver a plan to increase their hospital accommodation capacity by at least 50 percent to 75,000 but it’s predicted more than 100,000 beds will be needed in New York State.

Help will be on the way in a few weeks from Norfolk, Virginia where USNS Comfort is undergoing maintenance.

Last week the Pentagon said it was destined for New York but much like Mercy, plans could change. 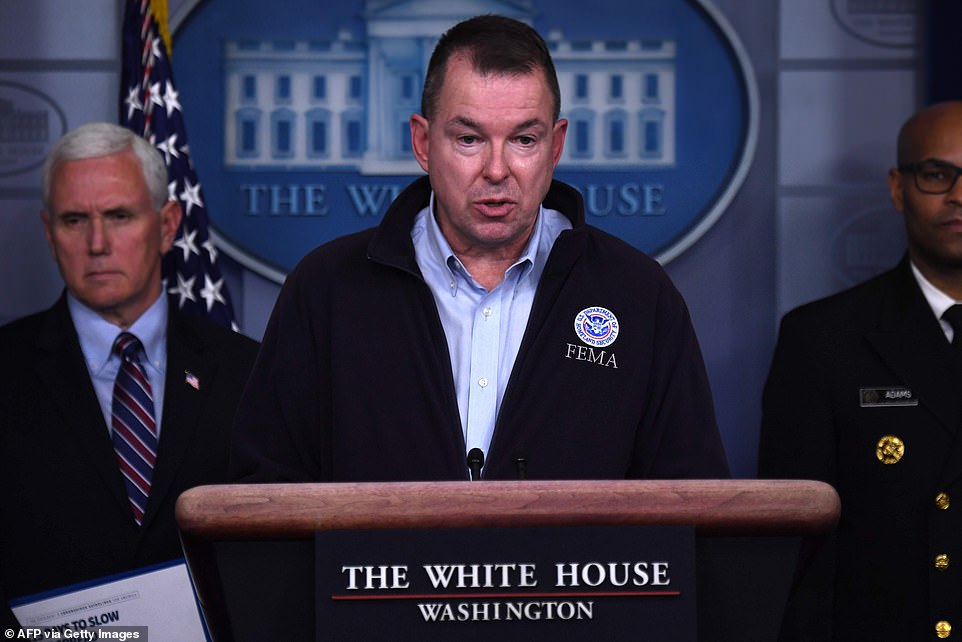 Administrator Peter Gaynor speaks during the daily briefing on the novel coronavirus, COVID-19, at the White House on Sunday. He said: ‘Even though there are more cases right now in Washington, the projected needs for beds in California is five times more that of Washington’

Calling it a ‘weeks issue’, Pentagon spokesman Jonathan Hoffman admitted ‘it’s going to be a little while’.

‘At that time, it’s intended to head to New York, but we’ll continue to evaluate the situation and make a determination on where it’s best suited,’ Hoffman said.

The 894-foot modified supertankers are decked out with 12 operating rooms, a medical lab, digital radiological services, a pharmacy, an optometry lab, a CAT-scan and two oxygen producing plants.

At a press conference Thursday, Trump said he’d spoken to the chairman of Carnival Cruise Lines about its fleet potentially helping with the government’s coronavirus response.

The suggestion came as a shock to many as officials have spent the past several weeks warning Americans to avoid cruise ships for their own safety after COVID-19 outbreaks ravaged multiple vessels.

‘One of the things that happened this morning, I spoke with Micky Arison at Carnival Cruise Lines, and he’s going to make ships available,’ Trump told reporters.

‘So in addition to the big medical ships that you have coming, if we should need ships with lots of rooms, they’ll be docked in Los Angeles and San Francisco – different places.’