The US Navy reprimanded sailors they found violated Pentagon rules by wearing ‘Make Aircrew Great Again’ patches on their uniforms while attending an event with President Trump in Japan last year.

The sailors were spotted aboard the USS Wasp on Memorial Day 2019 with the ‘Make America Great Again’-style patches attached to their uniforms.

The red patches show a cartoon Trump-like figure pointing in the manner of Navy recruitment posters, reading ‘Make Aircrew Great Again’, a play on the infamous slogan. The patches first appeared in 2017.

A spokesperson for the Pacific Fleet said on Thursday that the sailors would be punished as the patches could be viewed as political activity. Active duty personal are required by Department of Defense guidelines to avoid all political activities and are not allowed to wear political statements on their uniform. 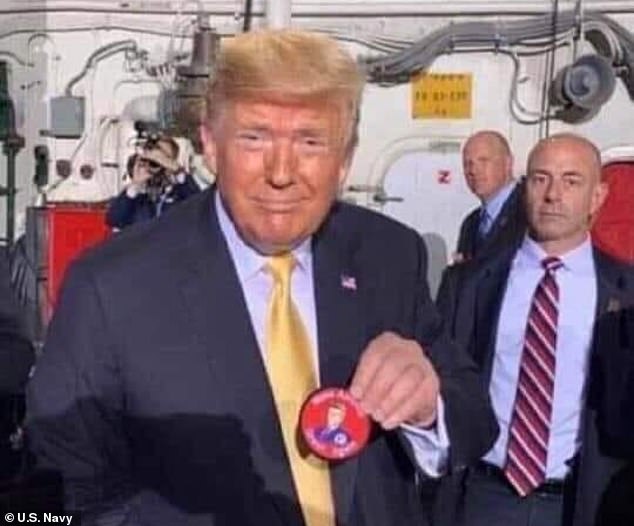 Donald Trump (R) arrives aboard the amphibious assault ship USS Wasp to participate in a Memorial Day event in Yokosuka on May 28, 2019, holding the Make Aircrew Great Again patch

Service members were spotted wearing the patches as they listened to President Trump while he spoke to troops at a Memorial Day event aboard the USS Wasp, on Tuesday, May 28, 2019, in Yokosuka, Japan.

Several days after the speech, eighteen sailors and officers assigned to the Guam-based Helicopter Sea Combat Squadron were told that they were suspected of breaking protocol with the patches and an investigation was launched.

Nine of those investigated had attended the speech and their officer-in-charge, a lieutenant commander, immediately confiscated their patches after Trump had spoken.

Wearing an unofficial patch is a common occurrence on military personnel uniforms although they are prohibited from sharing political messages while in uniform.

Instead, patches are sometimes worn with humorous images in an effort to boost morale.

It generally falls to the unit commanders to ensure that any unofficial patches do not violate the military regulations or that political messages do not appear. 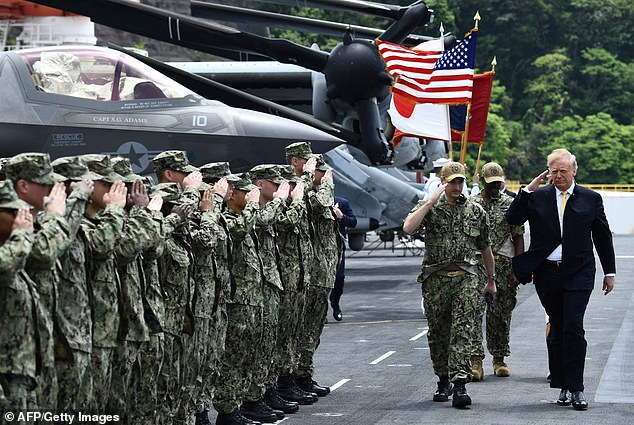 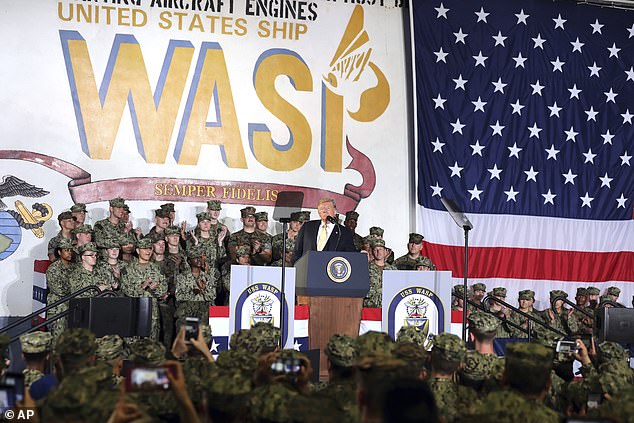 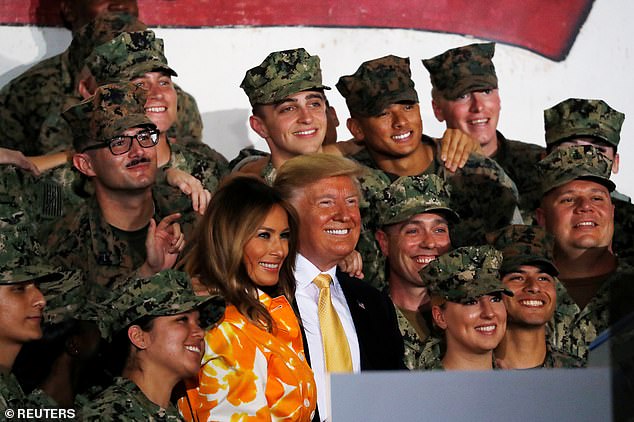 The investigation found that the sailors had not intended to make any political statement with the patches but had still broken the rules.

‘Though the investigation found the Sailors did not intend to wear the patches as a political statement for or against the President, U.S. Pacific Fleet determined that, because the American public could reasonably view the wearing of the patches on official uniforms as DoD association with President Trump’s 2020 campaign, it was in violation of DoDD 1344.10,’ Pacific Fleet spokesperson Rachel McMarr said in a statement released Thursday.

McMarr added that the ‘appropriate administrative measures’ would be taken by the Navy to ensure that the sailors and their leaders understood the requirements and that they ‘give due consideration to the heightened risk that actions by service members in uniform will be perceived as an official DoD position’.

Military.com reports that the sailors and officers received nonjudicial punishments which were carried out on a unit level. Punishments of this kind include a formal reprimands, loss in rank and pay, or other restrictions. 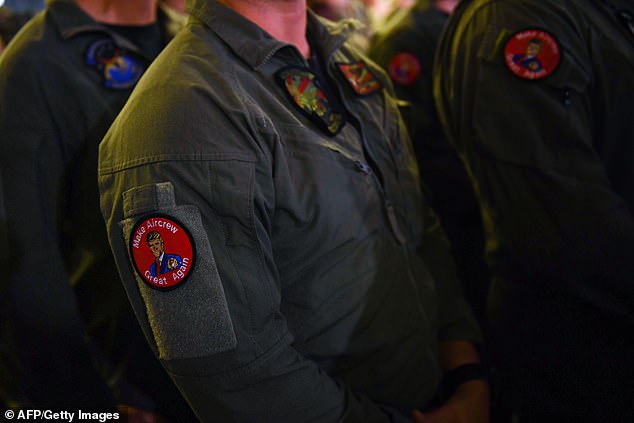 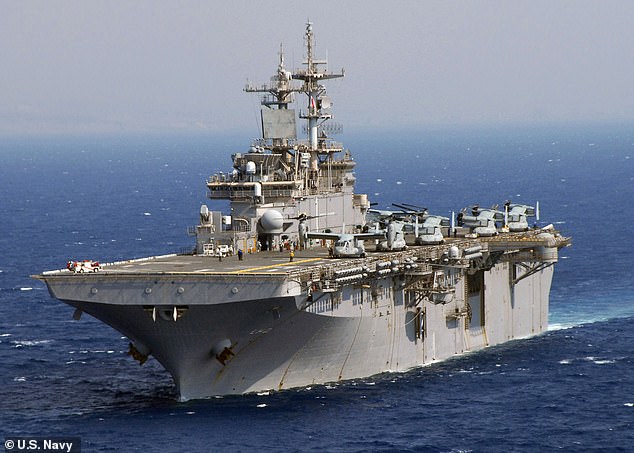 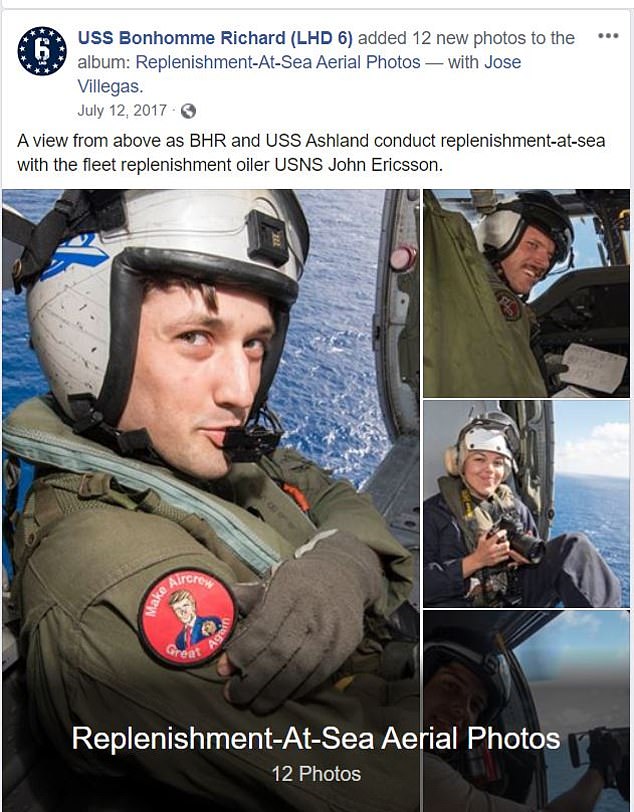 Defense Secretary Mark Esper issued a memo to service members and civilians employees last week to remind them of the guidelines.

‘All Department of Defense personnel must be steadfast in our commitment to defend the Constitution and our Nation’s democratic principles,’ he wrote.

‘As citizens, we exercise our right to vote and participate in government.

‘However, as public servants who have taken an oath to defend these principles, we uphold DoD’ s longstanding tradition of remaining apolitical as we carry out our official responsibilities.’